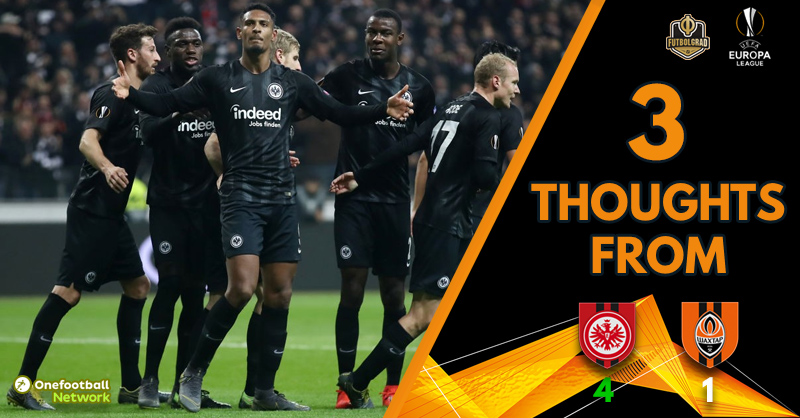 Eintracht’s festival fuelled by Plan B, Shakhtar crash out of Europe

Frankfurt v Shakhtar Donetsk started with a minor scandal. Concerns by the police over certain elements of the stadium choreography meant that fans reacted, perhaps overreacted, by cancelling the banner. The noise was almost unbearable here at the Waldstadion to start the match. Whenever Frankfurt did have the ball a roar accompanied the proceedings, whenever Shakhtar won possession, however, the boos and whistles almost caused the ears to bleed.

“We had a great night. The city celebrates. To beat a side like Shakhtar Donetsk is incredible,” Adi Hütter said after the game.

The win against Shakhtar Donetsk was the seventh win in eight Europa League games this season for Eintracht Frankfurt, and the Eagles should have probably won the return leg as well.

Indeed the atmosphere at the Waldstadion in Frankfurt was magical. Much has been said about Eintracht’s away support this season with the Eagles supporters flying all over Europe to support their team, but while the away support is terrific, the atmosphere at home is incredible. At times today one needed earplugs to work on the press tribune with the noise harrowing the eardrums — incredible. 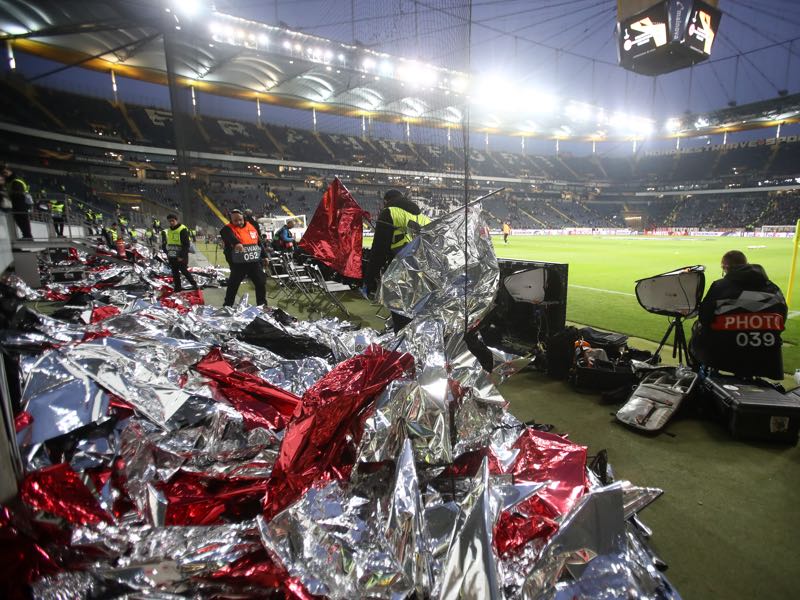 Frankfurt v Shakhtar Donetsk – Flags are seen on the ground after Frankfurt Ultras remove flags from a planned choreography prior to the UEFA Europa League Round of 32 Second Leg match between Eintracht Frankfurt and Shakhtar Donetsk at Commerzbank-Arena on February 21, 2019 in Frankfurt am Main, Germany. (Photo by Alex Grimm/Getty Images)

One downside of the night, however, was that the choreography that was supposed to take place ahead of the game was cancelled. It all started with comments made by President Peter Fischer. “The stadium must burn, and it will burn, that’s why it might be a bit foggy for you [journalists],” he said.

Those comments put the police on high alert, and after significant searches and a supposed protest banner, the fans opted to refuse to display the choreo altogether. To bad, but the atmosphere was great regardless and did not affect the team. “I didn’t really find out about it. I was to busy with the team. I heard a bit on the side, but that isn’t my job,” Hütter brushed the whole issue off.

“Our three strikers once again made the difference they all scored,” Hütter said about his front three. Of course, Luka Jović, Ante Rebić and Sebastien Haller were at it again, but while it was the same old up front, this was a bit of a different setup for the Eagles.

“All three have the quality. The way the ball was assisted was impressive. The goal Seb scored was without a doubt the key to success. Seb then made an excellent step over and scored a fantastic goal,” Hütter explained.

In the back, Martin Hinteregger played the central defensive position, and Makoto Hasebe was moved into midfield. “I thought they both did well on that position. It isn’t easy to play in central midfield against a team that can play well in the attack and likes to press,” Hütter said.

But by moving Hinteregger to the back Hütter had the freedom to move Hasebe into midfield where he acted as a wave-breaker but also passing machine giving Frankfurt much-needed stability.

“We want to play attractive football. But sometimes you need a Plan B against a top team. It was clear to me that we would have to play well defensively. I think it was obvious that we had to ensure that they don’t get behind our defensive line,” Hütter summed it up. 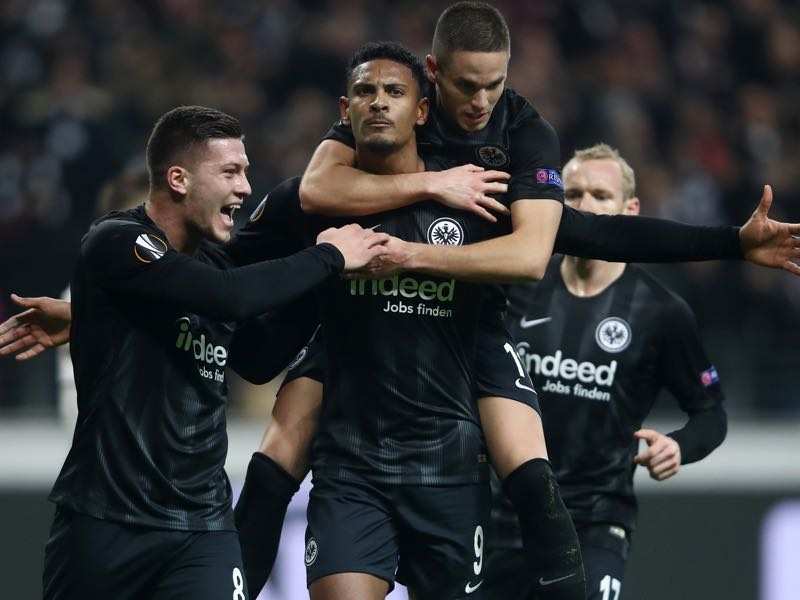 But while Frankfurt did indeed play defensive football, it would be harsh to describe it as unattractive. The Eagles were like a high-speed train whenever they did win the ball quickly rushing through Shakhtar’s midfield and exposing the Ukrainians on countless occasions.

Differences between the European team and the Bundesliga team: First of all we showed the best possible performance. It was clear to me that we couldn’t defend everything that Shakhtar would throw at us, but we did well. Perhaps the difference is confidence in Europe but also the fan base is more active in European games.

What about Shakhtar and what is next for both sides?

“Between the 60 and 80 minute we struggled. Shakhtar pressured and were unlucky. To be up by two goals at halftime was a huge advantage, as a result, we were sitting a bit deeper. Ultimately, we were able to score the goals that sealed the deal,” Hütter said.

It was in that period that Shakhtar Donetsk made critical changes to the team. New signing Manor Solomon was taken off, and the Brazilian central midfielder Maycon was brought on. That in turn, allowed Viktor Kovalenko to push further up the pitch, which caused some problems for Eintracht.

“I already told the team at halftime that we will have to push hard to get this result. I would have taken players off if they weren’t able to go all the way. Mentally it was very difficult game and we are relieved to have gone through,” Hütter concluded. 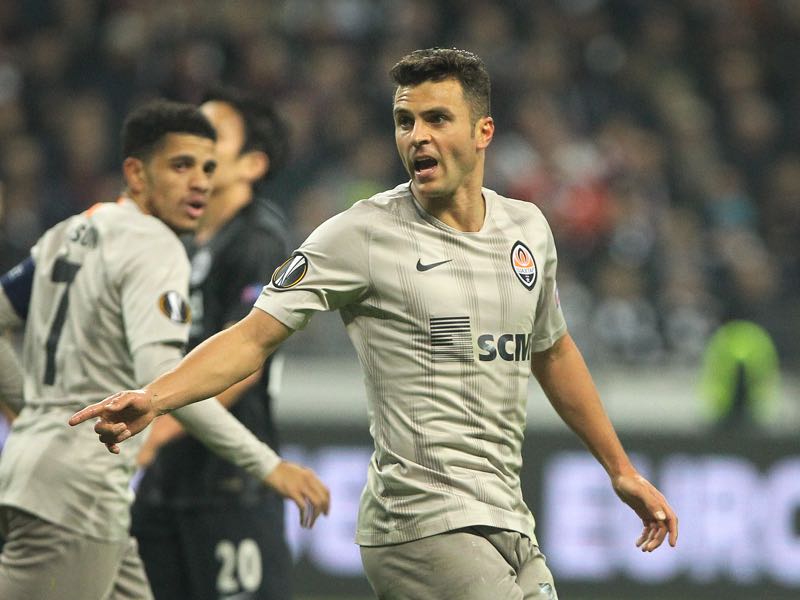 But instead, it was Shakhtar, who pushed to get back into the game and after making it 2-1 hit aluminium twice. “We reacted well in the second half: we managed to score one, there also were two more chances to score. The hosts, in turn, very competently counterattacked and managed to score another one,” Shakhtar head coach Fonseca said after the game.

For Shakhtar, the European season is now over and with that begins Fonseca’s tough task of motivating his side to play against second class opponents in the Ukrainian Premier League week in and week out.

Frankfurt, in the meantime, can look forward to tomorrow’s draw. “I am excited. Before the game you wonder whether you will be in the draw or not, we will all watch it together. I want an attractive opponent without having to travel to far,” the Frankfurt coach said about tomorrow’s draw.