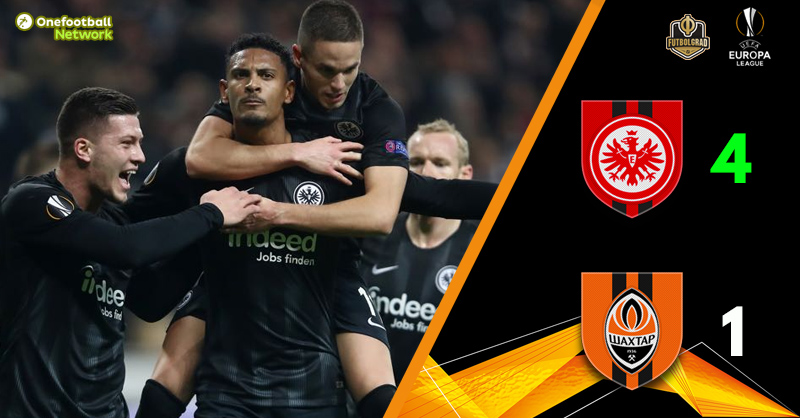 Frankfurt v Shakhtar started with a minor scandal. Concerns by the police over certain elements of the stadium choreography meant that fans reacted, perhaps overreacted, by cancelling the banner. The noise was almost unbearable here at the Commerzbank Arena to start the match. Whenever Frankfurt did have the ball a roar accompanied the proceedings, whenever Shakhtar won possession, however, the boos and whistles almost caused the ears to bleed.

In that context, Frankfurt, with the added benefit of two away goals, started with some measured confidence that would lead them to a deserved victory.

Frankfurt’s strategy to begin was simple, keep Shakhtar as far away from their own goal as possible. As.a result, there were very few goal actions to start the match.

It took in fact until the 16′ minute for the first penalty area action when a cross found Sebastien Haller’s head, the ball missed the target, however. Six minutes later, in the 22′ minute, Eintracht had the lead. Danny da Costa made a fantastic run on the right, and his cross found Luka Jović whose shot from 14-yards left Andriy Pyatov with no chance.

In the 28′ minute, Frankfurt added number two. Sebastian Rode had a shot from outside the box blocked by Mykola Matviyenko’s arm, and the referee pointed to the dot. Sebastien Haller stepped up and sent Pyatov into the wrong corner.

At this point, the roof threatened to lift off at the Waldstadion. Frankfurt kept at it, and Jović almost added a third in the 31′ after going one-v-one with Pyatov. And Donetsk? The Ukrainians were seemingly shocked at this stage and simply could not find a way through the Eagles tightly woven defence.

Tellingly, Shakhtar’s best chance in the first half was a 40′ minute freekick from the edge of the box that Ismaily hammered on goal but was blocked by a heroic Filip Kostić, who dived into the shot. Then just before halftime Marlos tested Kevin Trapp with a curled effort from outside the box.

Two goals up Frankfurt could now afford to sit deep and absorb Shakhtar’s pressure. In fact, Frankfurt did very well at this stage to win the ball in midfield and quickly break forward, creating plenty of counter opportunities as a result. Jović, had the best in the 57′ when he broke into Shakhtar’s penalty box and rounded Pyatov but then missed the target.

At this stage, Frankfurt perhaps lacked consequence in their attacks. As a result, Shakhtar were given an opportunity to claw their way into the game in the 63′ minute. Ismaily was allowed to much space on the left and broke into the box where his low cross found Junior Moraes and the striker made no mistake scoring from close distance.

The Ukrainians now sensed opportunity, and in the 69′ minute, Marlos was given to much room at the edge of the box. His shot ended up beating Trapp but ricochetted off the crossbar to keep the Eagles ahead of the Miners. A nervous 15 minutes was beckoning for Frankfurt supporters and 15 minutes of hope for Shakhtar fans.

Sometimes it is fine margins that decide games. In this case, the margin was tiny. In the 78′ minute a header by Shakhtar’s Taison hit the underside of the crossbar, Frankfurt, however, showed no signs of shock and right away broke forward with Haller capping off a fantastic counter-attack to make it 3-1.

Frankfurt were through but not finished. The Eagles kept pressing high and with Shakhtar overcommiting numbers were given plenty of opportunities. One of those opportunities was easily put away by Ante Rebić in the 88′ minute, with the Croatian national team player easily beating Pyatov in a one-v-one situation. It was the crowning moment of an almost perfect in which Frankfurt advancing to the next round was only briefly in doubt.

Sebastien Haller was the man of the match. The French striker has now scored five goals and three assists in this competition. Today he scored the penalty that paved the way to the next round and then made it 3-1 when the Eagles were under pressure. 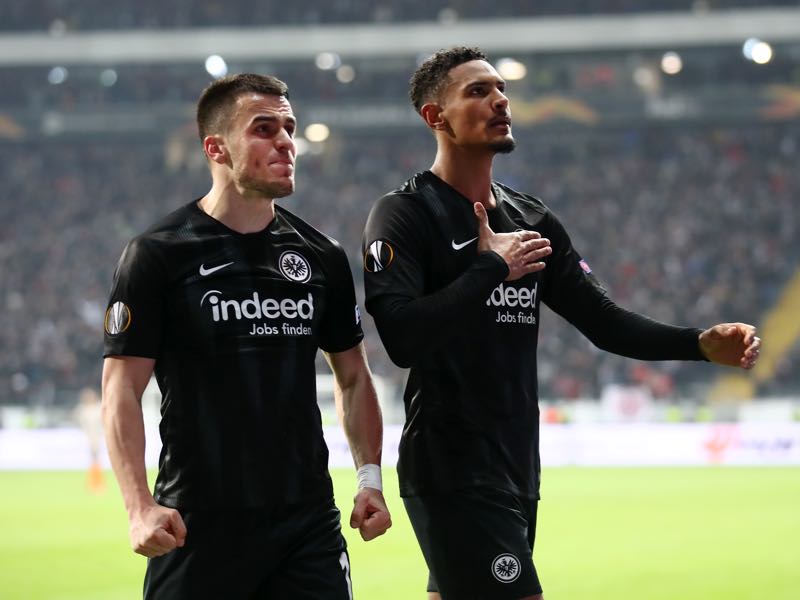 There was some fan trouble ahead of the match. Yesterday, President Peter Fischer promised the stadium would burn; the police then found fireworks among the Eintracht fans, which was supposed to be part of the choreo. The fans were then told not to use a banner that criticised the police and then reacted by not showing a choreography at all. Not that it mattered much the stadium was loud throughout the 90 minutes.