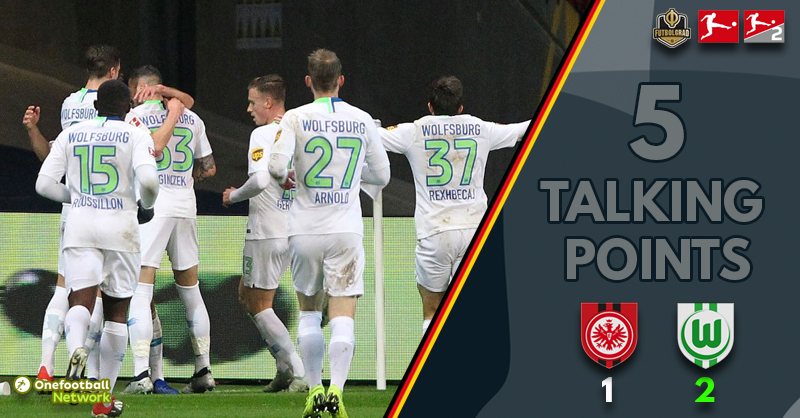 Wolfsburg stop the Frankfurt freight train in its tracks

Commerzbank-Arena – Frankfurt v Wolfsburg ended 1-2 in a fiercely contested Bundesliga match to round off Matchday 13. Goals to Admir Mehmedi and Daniel Ginczek put Wolfsburg 2-0 up, but despite Luka Jovic scoring late on the hosts were unable to fashion an equaliser.

Wolfsburg get it done

Bruno Labbadia’s game plan was well executed as Wolfsburg took all three points in a tough and hard-fought encounter. The visitors won the midfield battle and took advantage of a rusty Marco Russ with speedy attacks causing Frankfurt problems throughout the 90 minutes.

Admir Mehmedi took his goal well after a swift attacking move, and Daniel Ginczek finished at the back post from Elvis Rexhbecaj’s cross. Both goals were scored quickly following Eintracht turnovers with Wolfsburg taking advantage with ruthless efficiency.

A disciplined performance from Maximilian Arnold and contributions from the front three were the catalyst for the Wolves’ second consecutive win. Despite resorting to time-wasting tactics and riding their luck at times, credit is due at a difficult venue where Eintracht had won six games in a row in all competitions.

Weghorst and Ginczek combo getting it done

Bruno Labbadia began the season by starting Wout Weghorst up front with Daniel Ginczek coming off the bench. That changed on Matchday 9 as Weghorst started alongside Ginczek in a 3-0 win at Fortuna Dusseldorf. Labbadia hasn’t looked back with the towering forwards starting every match since.

Weghorst mainly occupies the striker position with Ginczek given licence to roam across the front line. That has the potential to confuse the opposition defence and adding Admir Mehmedi into the mix gives Wolfsburg their trio of attacking threats. 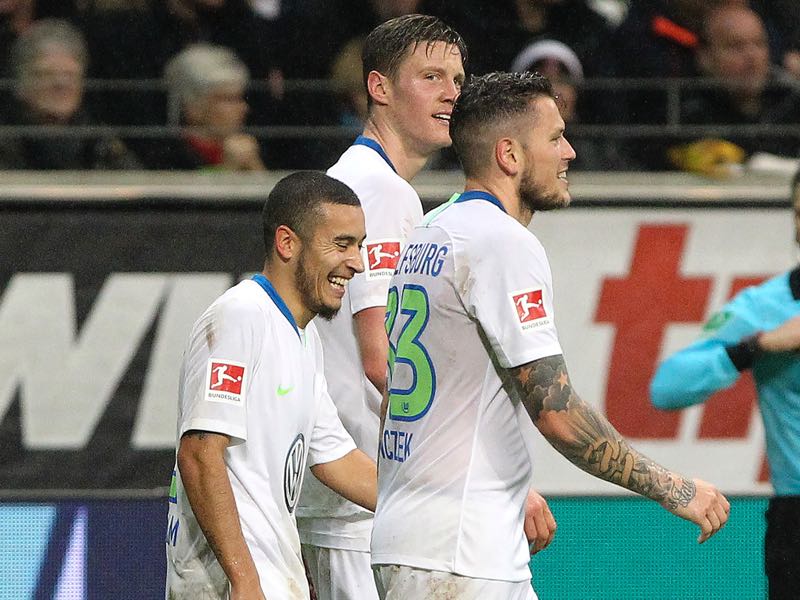 Josuha Guilavogui came off the bench late on, and Ignacio Camacho is still to return. Once fit, Arnold can move back to his preferred attacking midfield position which will further improve Wolfsburg who have an outside shot at qualifying for the Europa League.

Sebastien Haller, Luka Jovic and Ante Rebic have justifiably received praise this season, but on this occasion, they were overshadowed by Wolfsburg’s front three. They had chances as Jovic headed a Rebic cross wide and Haller’s clever pass to Ante Rebic saw the Croatian fouled inches outside the box.

Rebic drove into the box in the second half with another penalty claim denied before his shot sailed narrowly over the bar. However, Rebic was sloppy in possession on numerous occasions and was often guilty of trying too hard when a simple move and pass would have sufficed.

Haller and Jovic combined to give Eintracht some hope of a late comeback, but overall Frankfurt’s front three failed to press the Wolfsburg defence effectively and fell below the lofty standards they have been setting this season.

Eintracht were worryingly open in central midfield after losing possession and vulnerable against counter attacks. Gelson Fernandes and Jonathan de Guzmán have been doing a good job lately, but it was no surprise when Adi Hütter replaced them both in the 63rd minute for Jetro Willems and Mijat Gacinovic.

Frankfurt are missing Lucas Torró who provides the physicality and guile that is required in the defensive midfield position. Marc Stendera is also an option with a lack of balance in the team, especially when Rebic is caught up field and fails to do enough defensive work.

Max Arnold’s performance for Wolfsburg was exactly what Eintracht Frankfurt were missing tonight. Hütter needs to find a solution soon because some of the weaknesses in his team were exposed and other teams will be taking note.

Bad day at the office

Despite some of the points outlined above, it was primarily a bad day at the office for the Eagles. Close to being awarded an early penalty, De Guzman’s shot hit the post and Haller had a goal ruled out for an earlier offside.

Frankfurt couldn’t convert two good chances from corner, and Koen Casteels stopped a Filip Kostic shot on the goal line. Eintracht came home strong, but when your last chance of an equaliser gets stopped inadvertently by the referee which instigates a Wolfsburg attack, it’s just not your night.

Hütter needs to guard against complacency, and this defeat should do the trick. Having previously won 10 of their last 11 competitive fixtures, this is still a very good team, but they can’t rest on their laurels and assume that victories are going to come easy.