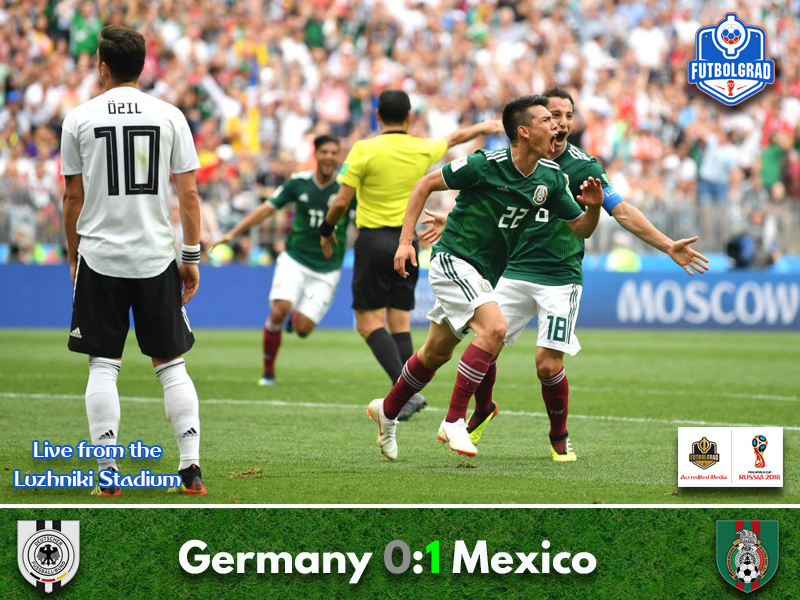 Germany v Mexico ended with the most sensational result of this tournament as El Tri beat Germany to take the world’s biggest scalp.

The world champion kicked of proceedings on Sunday at the Luzhniki Stadium in Moscow against Mexico. Ahead of kick-off die Mannschaft had to replaced left-back Jonas Hector – Marvin Plattenhardt played in his stead.

Mexico had the first chance of the match when Hirving Lozano manage to break free on the left in the first minute and only a last-minute tackle by Jérôme Boateng prevented El Tri from opening the scoring. The ensuing corner also caused chaos with keeper Manuel Neuer having to risk his neck to jump on a loose ball.

Although Germany quickly settled into their passing game Mexico remained the more dangerous side by breaking forward quickly whenever Germany lost possession. Germany had to deal with wave upon wave of Mexican attack and at the early stages were lucky not to go down by an early goal.

It was a chaotic start to the match in which Germany finally recorded their first chance in the 18th minute – Timo Werner received a ball from midfield and turning around his defender managed to unleash a shot that was, however, too centred to beat Mexican keeper Guillermo Ochoa.

The chance did little to deter Mexico, who were swarming Germany’s midfield and defence causing problems after problems as die Mannschaft failed to gain control over the match. As a result, it was only a matter of time for El Tri to take the lead and when Mats Hummels slipped in midfield he allowed Hirving Lozano to break forward and breaking into the box he danced around Boateng and slipped the ball past Neuer to make it 1-0 in the 35th minute.

Germany tried to respond right away and in the 37thminute Toni Kroos hit the crossbar with a freekick from 20-yards out. It would remain the only chance before halftime for Germany as die Mannschaft struggled to contain a Mexico side that was both swift and dangerous when breaking forward.

How would Germany respond in the second half was the biggest question among observers? The answer was with possession football and by encircling Mexico’s penalty box.

Germany, however, struggled to find a way through and Bundestrainer Joachim Löw reacted taking off Sami Khedira and bringing on Marco Reus – effectively changing the formation from 4-2-3-1 to 4-1-4-1 with Kroos acting as a single pivot.

Nonetheless, it took Germany until the 64th minute to create their next chance with Timo Werner hitting an acrobatic bicycle kick after a Boateng cross – but much to the releave of Ochoa the ball hit the top netting. Three minutes later it was once again Werner, who could have equalised after a cross – but he failed to convert from just eight yards out after receiving a cross from the half-field.

Germany were testing and probing in what appeared to be an infallible El Tri defence. Even Toni Kroos could not find a way through as he saw a dropkick from just outside the box sail past the right post by just a few inches in the 76thminute.

With time ticking against Germany Löw reacted a second time taking of left-back Plattenhardt and bringing on striker Mario Gomez. The change meant that Mexico had space to counter-attack and Chicharito could have, should have, scored in the 81stminute when broke away on a high sitting Germany defence.

At this point, the stadium was a cauldron Mexico fans were in anticipation of beating Germany, the reigning world champion, for a first time at an international tournament. That moment seemed almost a certainty when Julian Brandt saw a rocket of a shot go just inches wide of Ochoa’s goal in the 89thminute. It was the last significant chance of the game and even Neuer pl

Hirving Lozano was the man of the match. The PSV forward was brilliant causing all sorts of issues for Bayern München right-back Joshua Kimmich. Working tiredlessly Lozano was able to explore the distance between midfield and defence in Germany’s tactical setup. 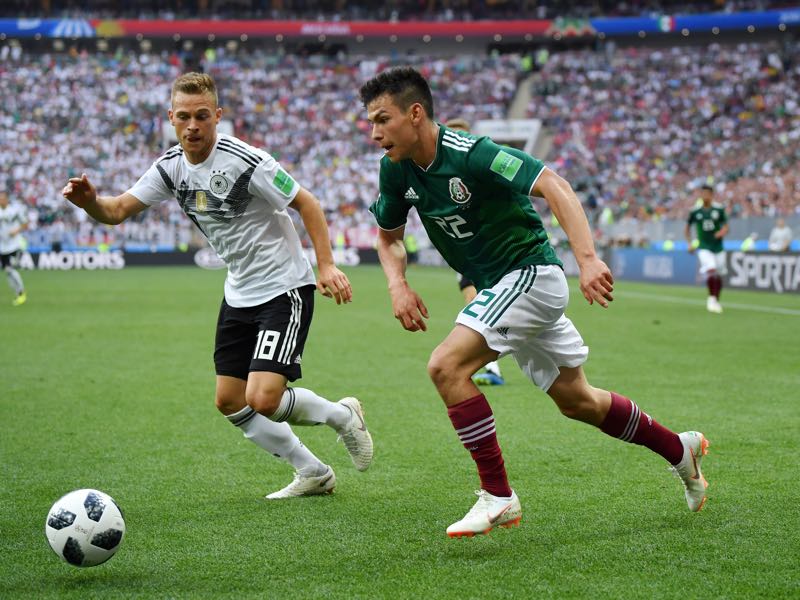 Friendlies do not matter until they do. Germany have for years struggled in friendly games but were then on form for major tournaments. This time, however, the sluggish performances from the friendly matches carried over to the tournament with die Mannschaft unable to gain the necessary match form to break down a Mexico side that had a brilliant game plan.