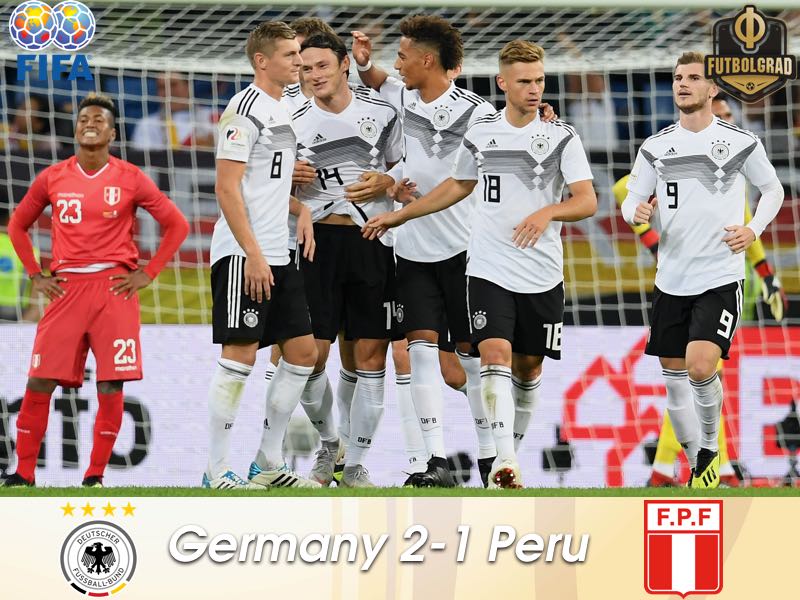 Germany come from behind to beat Peru in Sinsheim

Germany v Peru ended with a fortunate victory for Germany in a game in which Löw’s men still showed many of the ills that led to an exit from the World Cup.

Germany started this match relatively unchanged in comparison to the 0-0 against France. In goal Marc-Andre ter Stegen started ahead of Manuel Neuer, Niklas Süle replaced Mats Hummels in defence, and Joachim Löw handed Nico Schulz his debut as a left-back. Meanwhile, Julian Brandt and Ilkay Gündogan started for Thomas Müller and Leon Goretzka.

Die Nationalmannschaft went into the match with a big height advantage, only one German player was below 180cm whereas Peru had just one player above 180cm. Not surprisingly Germany’s first chance came after a Toni Kroos corner in the 14′ minute with Matthias Ginter failing to place his header despite being given plenty of room in the area.

Marco Reus, in the 16′ and 17′ should have then scored the lead for Germany. Instead, it was Peru, however, to open the scoring. A long ball found a sprinting Luis Advincula, who overrun Nico Schulz and then beat ter Stegen with a low drive at the near post. Germany were only shocked for a moment, and in the 25′ minute Toni Kroos managed to play a ball through to the right corner of the penalty box where Julian Brandt was left wide open, and the Bayer Leverkusen attacking-winger then beat goalkeeper Pedro Gallese with a beautiful lop to make it 1-1.

There were chances for Germany to make it 2-1 before halftime. Timo Werner went one-on-one with Gallese in the 35′ minute but failed to get the ball past Gallese, and Ilkay Gündogan had a chance in the 38′ minute after a great combination in midfield but was also stopped by Gallese. At the same time, Peru always appeared to be dangerous in the transition game exposing weaknesses in Germany’s transition game, a problem that already plagued die Nationalmannschaft during the World Cup.

Raul Ruidíaz then had the big chance to get Peru upfront within moments of the second half kickoff. In the 48′ minute, Miguel Trauco played a low ball into the centre of the box where Ruidíaz only needed to tap the ball home but the Seattle Sounders striker somehow managed to miss the target from just a few yards out. Peru also had the next chance in the 54′ minute, Christian Cueva served a corner kick into the box and ter Stegen had to be on guard to stop Pedro Aquino’s header.

Peru then won a free-kick in the 56′ minute, but Germany’s defence managed to win the ball quickly and overwhelm Peru on the counter-attack but once again die Nationalmannschaft was wasteful with their chances with Werner opting with a fancy lop rather than a powerful shot, which ended up missing the target.

At that stage, it was a wide-open game with both sides leaving plenty of room for counter-attacks. In the 58′ minute, Advincula had the chance to score his second after he was once again given to much room on the left flank but this time his shot failed to hit the target.

Around the 70′ minute mark Bundestrainer Joachim Löw started to make several changes, which somewhat took out the flow of the match. Among the substitutions was Thilo Kehrer, who came on for Ginter, making his debut for Germany. Freiburg’s Nils Petersen was also brought on in that period, and the striker almost made it 2-1 in the 75′ minute with a close-range shot that just about missed the goal.

With just ten minutes to go Germany started to encircle the La Blanquirroja and finally scored their second goal of the match. In the 86′ minute, debutant Schulz received the ball at the edge of the box and found himself with room managed to get the ball on goal, it was a soft shot, but Gallese, who had been excellent, let the ball slip underneath his arm to give Germany the lead. It was the final act of a game in which Germany were the better team against a courageous Perus side. 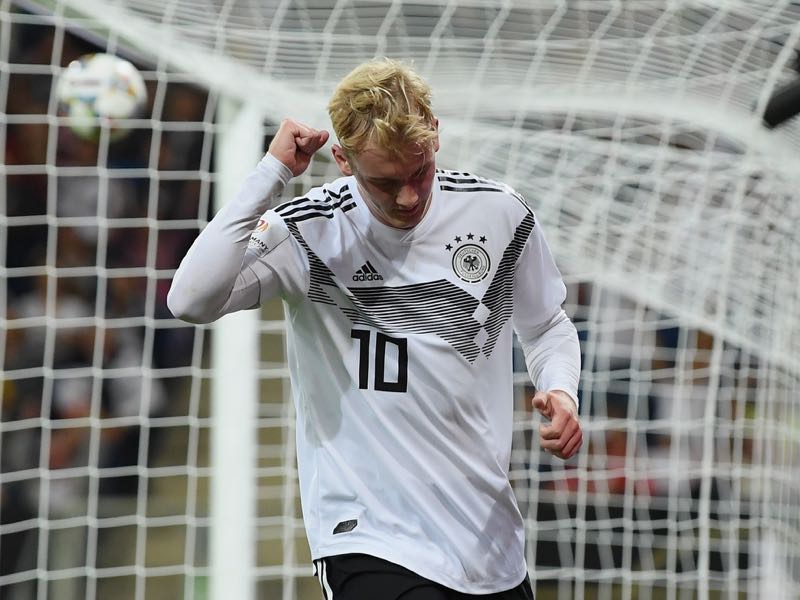 Germany v Peru – Julian Brandt of Germany celebrates after scoring his team’s first goal during the International Friendly match between Germany and Peru on September 9, 2018, in Sinsheim, Germany. (Photo by Matthias Hangst/Bongarts/Getty Images)

Germany won the match but many of the World Cup problems remain. Die Nationalmannschaft was dominant in possession but despite that could not create clear-cut goalscoring chances. Furthermore, despite dominating possession, Germany lacked stability in midfield allowing Peru to much room to counter when losing possession. Hence, while the game was an improvement, Bundestrainer Löw still has plenty of work ahead of him when it comes to getting the German national team back on the path of success.