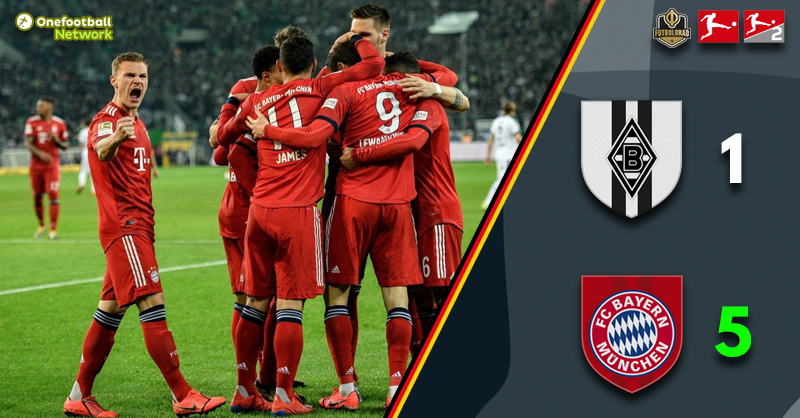 Gladbach vs Bayern ended with the hosts suffering a  5-1 thrashing as the Munich side joined Borussia Dortmund at the top of the Bundesliga.

The Bavarians started with intent and were ahead in the 2nd minute. Thomas Müller sent Robert Lewandowski through on goal with his shot tipped wide by Yann Sommer.

James Rodriguez whipped a corner in that was met by Javi Martinez who appeared to push Nico Elvedi out of the way before heading in from close range.

Serge Gnarby burst clear after a slip by Michael Lang but couldn’t find a teammate in the Gladbach box. FC Bayern were pressing well, winning the ball back frequently and cutting off the Foals’ passing lanes.

Jonas Hofmann earned an early yellow card for holding back Müller in a dangerous position. The visitors made it 2-0 soon after as Gnabry’s clever cross was met by Müller, his shot was stopped by Sommer but the space interpreter was on hand to poke it home.

It was men against boys in the early stages with Mönchengladbach second best in every department. Florian Neuhaus headed wide with Gladbach’s best chances coming from offside positions, Michael Lang shooting wide and Alassane Plea’s close-range ruled out.

Niko Kovac’s side spurned a number of opportunities to extend their lead. A Manuel Neuer goal kick evaded Matthias Ginter with Müller feeding Lewandowski who had a weak shot saved by Sommer.

Lewandowski then shot over the bar before Gnabry’s shot was saved at the near post. Gnabry had another chance after being sent through 1 on 1 by Lewandowski with his effort shot saved Sommer once again.

Lars Stindl sent a warning shot over the bar and wouldn’t be deterred. A clever move saw Thorgan Hazard set up Stindl who made no mistake the second time, firing past Neuer to get the hosts back in the game.

A shot from Müller was deflected for a corner that Martinez headed at Sommer to end an exciting first half.

Whatever Dieter Hecking said at half-time went out the window in the opening minutes of the second half. Nice Elvedi’s weak pass was intercepted by Lewandowski, James taking his time before shooting wide.

Thiago then burst clear and pierced the defence to find Lewandowski who showed strength and poise to shoot past a helpless Sommer. Oscar Wendt powered a free kick past the post but the hosts were looking short of answers.

Müller’s weak shot failed to trouble Sommer before Lewandowski shot blocked. It should have been 4-1 not long after as a bad turnover led to another Lewandowski shot that forced a crucial block from substitute Denis Zakaria.

There was plenty of time for Bayern Munich to make their superiority count however – Joshua Kimmich’s cross found Lewandowski, his header was saved by Sommer but Gnabry was on hand to smash it home.

The rout was complete in added time, Kimmich taken down by Hazard in the box with Lewandowski stepping up to convert the penalty with ease.

The 5-1 result was fully deserved and sent an ominous warning to Borussia Dortmund who look powerless to stop the Bavarian giants claiming a seventh successive Bundesliga title.

Thiago Alcantara’s absence was one of the main reasons for FC Bayern’s slump in November but the midfield maestro is back to his best. Able to orchestrate proceedings from the middle of the park, the Spaniard can also do the dirty work with crucial interceptions and tackles. 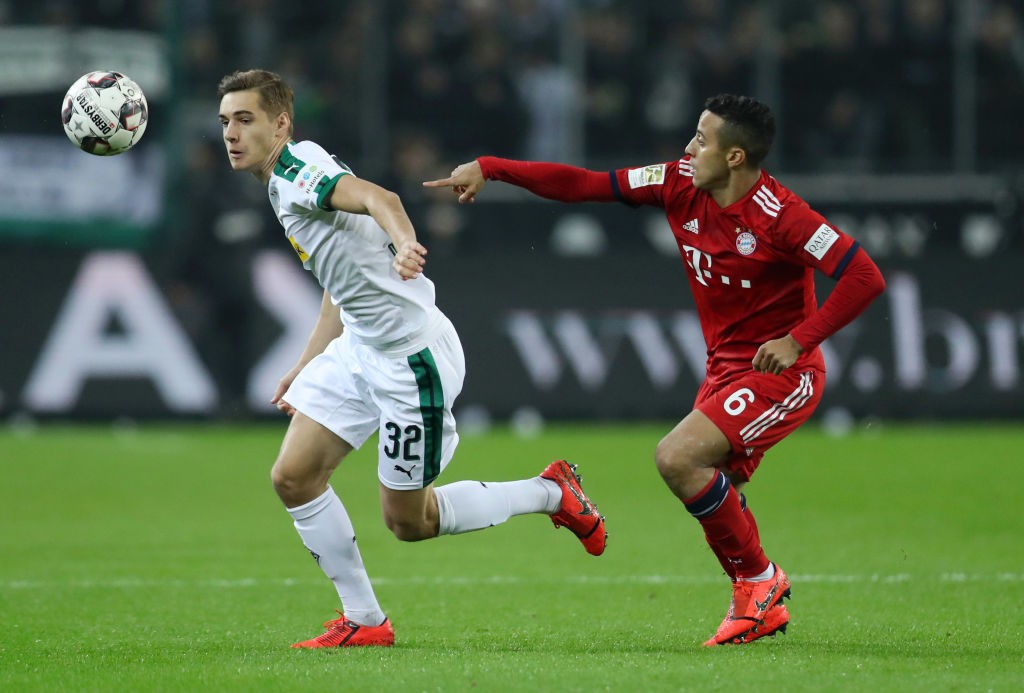 Bayern Munich joined Borussia Dortmund at the top of the Bundesliga table and are clear favourites to go on with the job and secure their seventh straight title. They were far too strong for Mönchengladbach who were powerless to stop the onslaught in the second half.