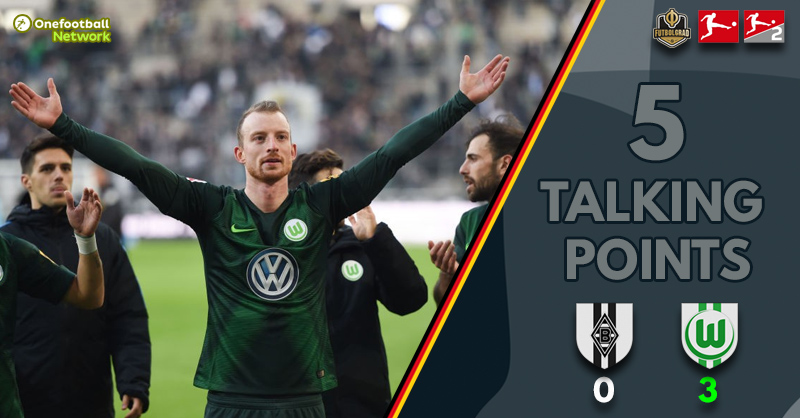 Gladbach v Wolfsburg – Wolfsburg continued their push for a European spot with a 3-0 win against Borussia Mönchengladbach at Borussia-Park. The Foals paid the price for missing early chances; Wolves substitute Admir Mehmedi bagging a brace after a deflected Yannick Gerhardt effort gave the visitors the lead.

There is no doubt Wolfsburg had some luck on their way to victory, but nothing should diminish their performance. Wolfsburg head coach Bruno Labbadia described the win by saying: “We were unbelievably efficient up front and also had that bit of luck on our side, no question. We don’t need to apologise for the result though; the team simply played very, very well.”

Wolfsburg recovered from the early onslaught and slowed the game down after taking the lead. They dug in and restricted the hosts who didn’t create enough in the second half against the Wolves’ resolute defence.

Wolfsburg striker Wout Weghorst was full of praise for his manager. “We had a good plan, and for the manager, team is really important, he made a team fight machine which is a big compliment,” he told the Futbolgrad Network after the match. Nobody deserved more credit for fighting in Mönchengladbach than Admir Mehmedi.

Mehmedi came off the bench and took just four minutes to score. He showed Josip Brekalo and Renato Steffen how to profit from Weghorst’s threat, battling past Nico Elvedi to latch onto a long ball and finish past Sommer.

Mehmedi put the icing on the cake after showing more fight and determination in the box, jumping over a helpless Oscar Wendt to make it 3-0 with a close-range header. 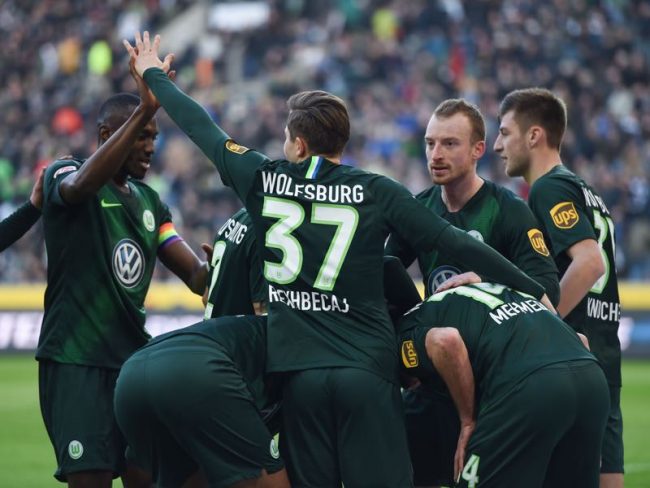 It was apparent when Wolfsburg won their opening two Bundesliga games of the season that European qualification was a real possibility. Victories against Schalke and Bayer Leverkusen showed that Labbadia might deserve more credit than just saving teams from relegation.

With a pre-season under his belt and some smart acquisitions in Jerome Roussillon and Weghorst, Labbadia has the Wolves in a great position to capitalise and be even stronger in 2019/20. Wolfsburg can realistically win all six of their remaining home games but face some stern tests on the road.

Weghorst said there are no restrictions for his side: “You always want to be as high as possible. Of course, you’re not thinking directly about Champions League, but we had a clear mind what we want, we have a good team and when we perform with the great mentality that we can show, everything is possible, and there are no limits.” 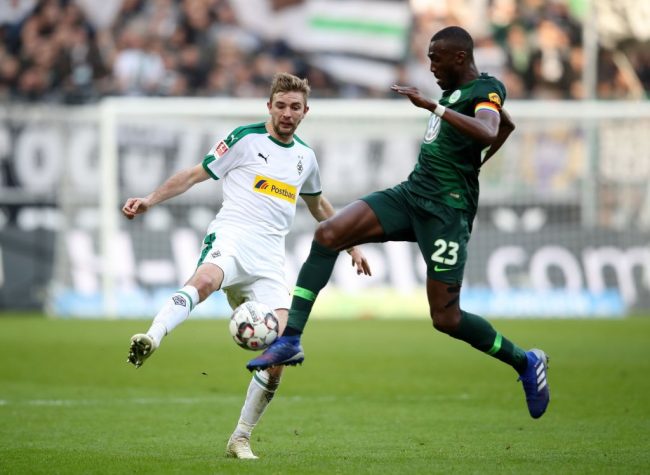 The frequent and prolonged injuries to Ignacio Camacho and Josuha Guilavogui can’t be understated. The Wolfsburg captains also play in defensive midfield and have been sorely missed when unavailable.

Labbadia had to move Max Arnold into the holding role to accommodate their absence, a role Arnold took some getting used to but is not his natural or most effective position. Guilavogui is still getting back up to speed but his break up play, positioning and leadership were on show in Mönchengladbach.

Weghorst was full of praise for the 28-year-old Frenchman, saying “Guilavogui is really important, he is our captain and everyone listens when he is speaking, he is very important for our team.” The statistics don’t lie. Wolfsburg have not lost in nine games with Guilavogui on the pitch and have lost just once in Camacho’s six starts.

It’s a familiar tale for the losing side in football – bad luck and an inability to capitalise on their chances. The fable was applicable for the Foals who tested Koen Casteels early on as the Wolves keeper tipped a fierce Matthias Ginter effort past the post.

Florian Neuhaus then had a treble of opportunities. His shot from distance went over the woodwork before a side-footed effort kissed the top of the bar. The best was yet to come however and was the turning point in the match.

Some risky play from Wolfsburg inside their own box saw Robin Knoche make a mistake, Lars Stindl feeding Neuhaus who looked certain to score before Knoche recovered and made a miraculous intervention.

At 2-0 down in the second half, the hosts were still in the game and should have made it 2-1. Stindl unselfishly teed up Hazard in point-blank range but the ball hit Casteels’ elbow and bounced over the bar. 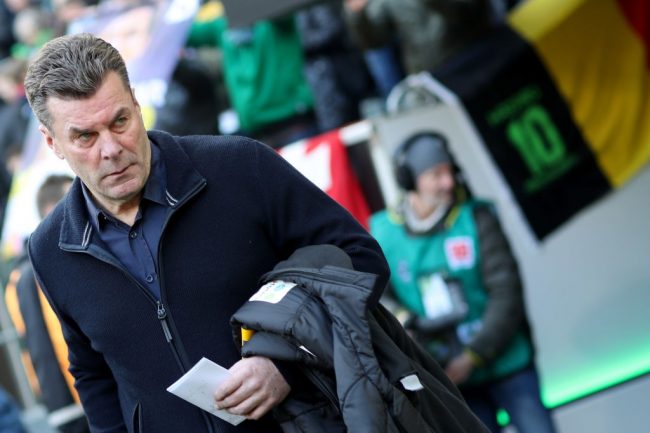 Dieter Hecking with a pensive look on his face during the Bundesliga match Gladbach v Wolfsburg. (Photo: Christof Koepsel/Bongarts/Getty Images)

Twelve straight home wins in the Bundesliga set a new club record after 35 years with the 54-year-old rightfully earning plenty of praise. Two straight 3-0 defeats at Borussia-Park have dented the Foals’ confidence and put their Champions League aspirations in jeopardy.

Hecking made four changes from the side that was defeated by Hertha Berlin and snatched a late 1-1 draw at Eintracht Frankfurt. He stuck with the same starting XI here and will surely contemplate further alterations before the Bayern Munich match.

Fabian Johnson is suspect at right-back, Patrick Herrmann not as effective as Alassane Pléa who has been suffering from a gastrointestinal infection. Jonas Hofmann replaced Denis Zakaria at half-time and is another option against the reigning champions.

The previous criticism of Hecking has been an inability to be flexible with tactics. Both teams lined up in a 4-3-3 formation which Hecking has favoured all season long, but there is a fear is that this predictability might be playing into the opposition’s hands.