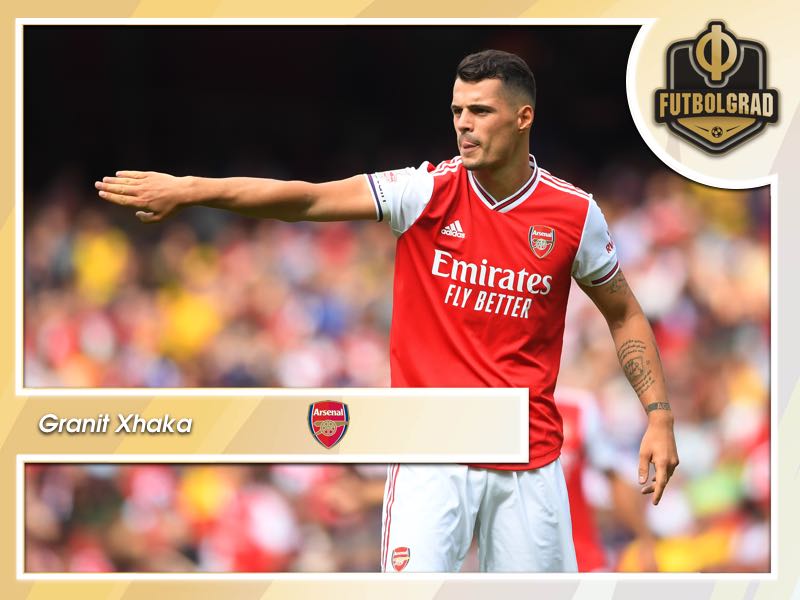 If you know what’s coming, it hurts a little less. That’s how I felt about Arsenal’s 2-2 draw against Watford on Sunday. I’ve been here so many times – early lead, defensive error, inevitable collapse – that it almost feels therapeutic. After years of pleading and hoping for change, I’ve finally learned to let go. I wish the club would reach the same conclusion with Granit Xhaka.

The 26-year-old registered another gormless display at Vicarage Road, in a ninety-minute showing notable purely for the absence of his customary yellow card.

On the surface, Xhaka looks every inch the Arsenal captain. The arrogant face and angled pass, the bulging bicep that struggles to contain the armband. The way he carries himself onto the pitch, all attitude, and malice, is undeniably impressive. Unfortunately, that’s where the problems start.

Xhaka is physically strong, but he rarely bullies his opponents. He is a gifted passer but is seldom incisive. He is a vocal presence, but never raises his own level, deigning instead to make the same amateurish mistakes. Every moderate-high, it seems, is followed by a predictable and anonymous low.

It’s this maddening lack of consistency that makes the Swiss so frustrating. With three league campaigns under his belt, we still talk about his ‘potential’. It used to be a word for describing frigid evenings in the Carling Cup, where Carlos Vela or Abou Diaby would lead a team of teenagers to an easy victory against seasoned professionals. Now, it describes what a team of international footballers could be, if only they managed to iron out the comical errors and daft capitulations more suited to Sunday League. Xhaka represents this shift in microcosm, cursed with a potential that he shows no inclination of fulfilling.

It’s wrong to pin all of this team’s woes on one player, of course. One André Santos does not a bad team make. Xhaka, arguably, did the best he could in the dying embers of Arsene Wenger’s reign, where defensive positioning and team shape were perishing afterthoughts. When he’s good, the Swiss is very good indeed, with a magnetic technique and a range-finding left boot. 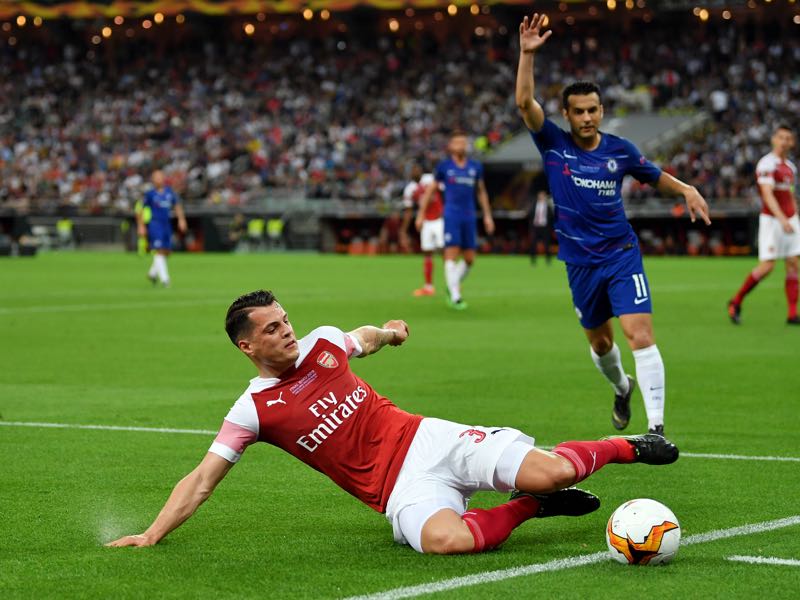 Granit Xhaka of Arsenal attempts to keep the ball in play during the UEFA Europa League Final between Chelsea and Arsenal at Baku Olimpiya Stadionu on May 29, 2019 in Baku, Azerbaijan. (Photo by Dan Mullan/Getty Images)

Emery, too, has his own questions to answer about Sundays’ display. Quique Sánchez Flores, all smouldering and sweat patches on his return to Hertfordshire, made telling substitutions in the form of Darryl Janmaat, Ismaila Sarr and eventual point-winner Roberto Pereyra. The Arsenal coach, however, withdrew a quietly efficient Dani Ceballos and a partially-resurrected Mesut Özil, when the German looked for once like he actually wanted to be on the field.

Yet it was the one starting midfielder left on the pitch who stood out most sorely on this sorry afternoon alongside a still-young Matteo Guendouzi.

There are certain roles that set the threshold for what is deemed acceptable at a football club. Central midfield at Arsenal, where the likes of Patrick Vieira, Emmanuel Petit, and Cesc Fabregas were forged – is one of them. Too often, Xhaka fails to meet those lofty standards.

FOR MORE ON FOOTBALL LISTEN TO THE GEGENPRESSING PODCAST NOW!

“No-one wanted the ball” he simpered to reporters after the Watford game.

“We didn’t show our game in the second half; we were too scared”.

It isn’t the first time he has felt the need to apologise. He did the same last week after his ‘decisive’ contribution against Spurs. He did it after the Europa League final in May, when Jorginho and Mateo Kovacic passed through him in the course of a demoralising 4-1 defeat. And he’ll do it again, the next time he lunges needlessly into a tackle, or fails to track a runner, or clumsily gifts possession. A spokesman for failure, when the team needs a harbinger of change.

Yet perhaps it is Arsenal that should be apologising to Xhaka, for entrusting him with a position and responsibility that he seems unable to fulfill. That he remains an undisputed starter says more, perhaps, about this club than it ever could about the player. Arsenal might just be losing their way, but they can’t afford to have Xhaka leading the revival.