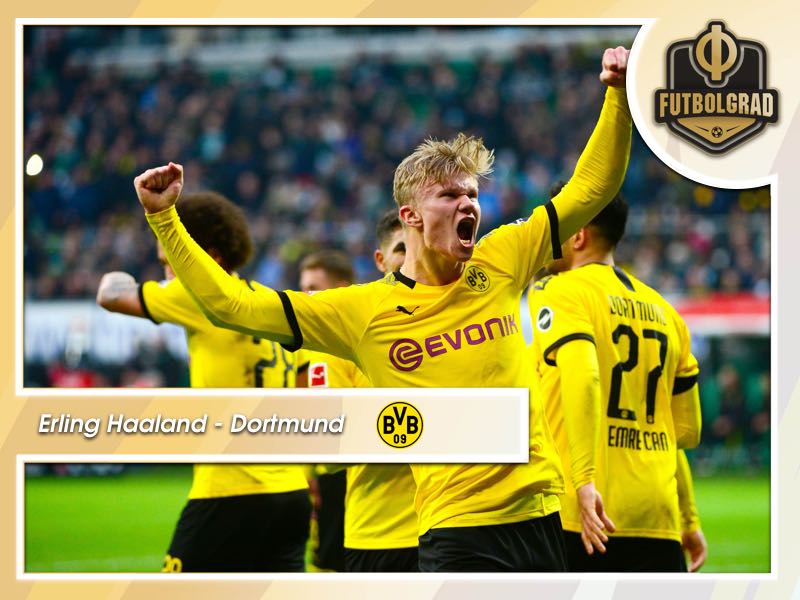 Erling Braut Haaland is an incredible talent. 19-year-old has already gained worldwide attention due to his goal-scoring ability and physical attributes, and he is a forward every team wished to have in its squad. Haaland has already managed to score 40 goals in 31 games and shows no signs of stopping so far. Besides, Haaland has become the first player in UEFA Champions League history to score six goals in his first three games and the first player in Bundesliga history to score five goals in his first two games.

From Bryne to Bundesliga giants

Born in England, the son of former Manchester City Player Alf-Inge Haaland was starting his career in a Norwegian side Bryne. He was not very prolific there, as he did not manage to score a single goal in 16 matches.

After Bryne, he moved to Molde, where he scored 14 goals in 39 matches. These numbers did not create a basis for something spectacular, but the turning point for Norwegian’s career was a transfer to the Austrian team Salzburg.

Joining the team in 2019 Haaland managed to score an incredible 17 goals in 16 matches. He was also a star figure at Champions League when in his first match against Genk Norwegian scored three goals in just 45 minutes. Haaland scored in every group game, except one against Liverpool.

The incredible results from the youngster were enough to attract the top teams from Europe. Manchester United at some point was the favorite club to sign Haaland, and many sports odds websites in Norway predicted the English side to be the favorite in a race. It was not unexpected, considering the fact Ole-Gunnar Solskjær is fond of Norwegian strikers and Manchester United lacks a decent striker this season.

However, Dortmund beat all the teams and signed him for just €20 million.

Haaland made debut for Dortmund against Augsburg, when he came as a substitute in the 56th minute. In just 23 minutes he managed to score a hat-trick, and Dortmund won the game 5-3. Haaland became the first player in Dortmund to score three goals in his debut match after Pierre-Emerick Aubameyang.

He proved critics wrong, who thought Haaland would not be able to score as many goals in Germany as in the Austrian Bundesliga.

Then came the second match against Koln, where Haaland scored two goals, taking his tally to 5 goals in 2 matches. In this match as well Haaland was a substitute and scored 2 goals in just 22 minutes.

In total, he has played in 7 matches for Dortmund so far and already scored nine goals. What is more surprising, he has become a January’s Player of the Month in less than a month. Had he been in Dortmund from the start of the season Haaland could fight for the best scorer, though Robert Lewandowski seems impossible to catch who has amassed 25 goals already.

Haaland also scored in his first game at DFB-Pokal against Werder on 4 February, which Borussia lost 3-2.

When Salzburg was eliminated from the Champions League, Haaland had eight goals on his account. Many thought he lost the chance to compete for the goal-scoring title, but joining Dortmund regained him the opportunity.

Dortmund played against PSG on 18 February. Haaland was in the starting line-up, alongside another talent Jadon Sancho. The German side was considered underdogs. But two goals from the Norwegian player helped Borussia to win the game 2-1. Especially one remarkable goal, a left-footed thunderbolt from 20 yards canceled the equalizing goal from Brazilian Neymar.

Haaland has already scored ten goals in 7 matches (8 for Salzburg and 2 for Dortmund). He is only behind Robert Lewandowski (11 goals). The youngster also has the second match in hand and will definitely try to score more goals against the French side.

Haaland has not managed to establish himself in the national team yet, having only two appearances. Still, it is only a matter of time before he becomes a regular striker for Norway, which has had a pretty decent generation recently.

Dortmund is undoubtedly the best club for Norwegian right now because it is playing the attacking style, which is comfortable for Haaland. Alongside Jadon Sancho, Giovanni Reyna, Julian Brandt Haaland creates a formidable attack that will cause trouble for a lot of teams.

Experts predict, at some point, Haaland will definitely join Premier League, but right now he can enjoy being a Dortmund where everything is perfectly arranged for the Norwegian player.

Erling Haaland is shaking the whole Bundesliga right now. A prolific goalscorer with his predatory finish drew resemblances with Zlatan Ibrahimovic. Well, it is still a long time for Haaland before he reaches the heights conquered by Zlatan, but considering the recent developments sooner or later 19-year-old will create his legacy.