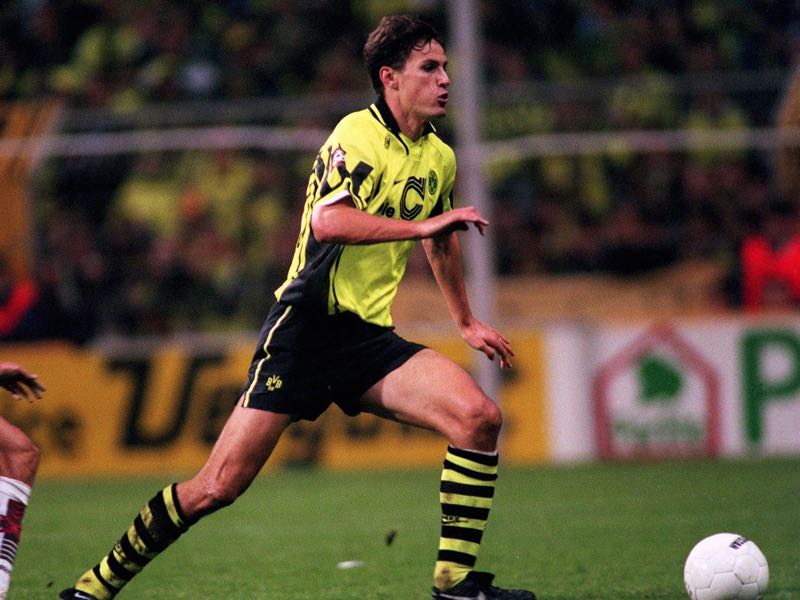 When Borussia Mönchengladbach host Bayer Leverkusen on Saturday afternoon at the Borussia-Park Bayer head coach Heiko Herrlich will also make his return to Gladbach. The current Bayer head coach played for Borussia Mönchengladbach between 1993 and 1995 and enjoyed his best spell, but also one of the most challenging periods in his career at the club.

Developed by SC Freiburg, it was at Bayer Leverkusen where Herrlich played his first Bundesliga matches scoring six goals in 75 games. Facing stiff competition in the likes of legendary strikers Ulf Kirsten and Andreas Thom Herrlich most often came off the bench. In 1991/92 he played 28 games, but in 24 he came either off the bench or was taken off the field early.

As a result, Heiko Herrlich decided to leave Bayer Leverkusen joining Borussia Mönchengladbach in 1993 for 1.6 million Deutsch Mark. Coached by Bernd Krauss Gladbach revolutionised the Bundesliga by becoming the first side to regularly play without a libero using a four-man defence with two centre-backs and two wing-backs instead. Furthermore, off the field, the club made several smart signings—alongside Herrlich the club also signed Patrick Andersson from Blackburn Rovers in 1993.

Heiko Herrlich was a Big Part of the Gladbach Revolution

Andersson would allow the club to abolish the libero in the long term—although the system had some growing pain with Gladbach finishing tenth in 1993/94 scoring 65 goals and conceding 59. With eight goals Herrlich, together with Martin Max and Karlheinz Pflipsen, was the second-best scorer at the club behind Swedish top scorer Martin Dahlin. Then the following season Stefan Effenberg joined the club on loan from Fiorentina and Gladbach became a revolutionary force in the German game.

Playing with four in the back and with Effenberg, Pflipsen, Dahlin and Herrlich forming a magical attacking lineup the club finished fifth and won the DFB Pokal. Herrlich in the meantime became a goalscoring sensation scoring 20 goals and winning the Torjägerkanone together with Werder Bremen’s midfielder Mario Basler. It was also during that time that Herrlich managed to play five matches for Germany scoring one goal in the 1996 European Championship qualification match against Wales.

Dortmund had reached the UEFA Cup final in 1993, which earned the club 25 million DM and ultimately led to the creation of a super club. With the championship secured and with Champions League riches waiting for Dortmund looked to add to their already impressive squad by signing Heiko Herrlich.

Dortmund quickly came to an agreement with Heiko Herrlich about a possible transfer to the Yellow and Blacks. Herrlich was in the belief that Gladbach would allow him to join Dortmund stating that there had been an agreement in place with Gladbach’s sporting director Rolf Rüssmann. Rüssmann, however, refuted any such verbal agreement and refused to negotiate with Dortmund.

As a result, Heiko Herrlich refused to participate in Borussia Mönchengladbach’s training session—showing that Ousmane Dembélé did not invent players going on strike—and instead trained with the Bundesliga 2 side Fortuna Köln. Gladbach, however, were adamant that Herrlich should fulfil his contract and the case even went in front of a labour court where the judge reminded Herrlich of his contractual obligations without ordering him back to training.

Herrlich, however, continued to refuse to train with Borussia Mönchengladbach. Dortmund in the meantime stepped up the chase, but Gladbach declined to talk to Dortmund directly. As a result, the future of the forward was entirely up in the air, and with the situation having come to a standstill the DFB decided to negotiate between the three parties, and in the end, Dortmund were forced to pay 11 million DM making Heiko Herrlich the most expensive inner German transfer in history.

The fallout was of the transfer, however, was immense. Herrlich was criticised for being a “Söldner” (or soldier of fortune) a term used in Germany for players, who have no loyalty to their club, and was booed in many Bundesliga stadiums the following season.

Herrlich – “I would have handled things differently now”

Now ahead of Saturday’s game the story of the transfer has once again made its rounds in Germany. Speaking to die Westdeutsche Zeitung on Thursday Heiko Herrlich admitted that he would now handle things differently. “Of course it is over. But I have often asked myself whether I would handle the situation the same way again: ‘No I would certainly not. I would have likely stayed in Gladbach, even though it was my right [to leave] as I was given a promise that no-one wanted to remember.’”

Herrlich, however, also pointed out that he would not have been able to make big money move to Gladbach without the help of sporting director Rüssmann. “Rüssmann just did his job. I still think about the situation even though I was on the right. When he was still alive, I often tried to show him that I am thankful for what he had done for me. We often circumnavigated the topic. But perhaps I also failed to tell him that I have made a mistake.” 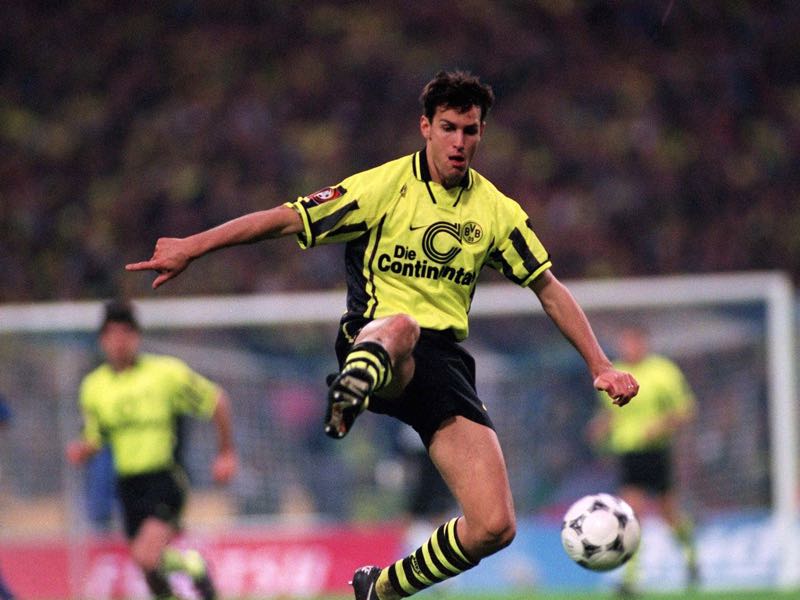 Heiko Herrlich ended his career with Borussia Dortmund in 2004. (Photo by Bongarts/Getty Images)

Herrlich admitted that the pressure of being labelled a soldier of fortune when he first moved to Dortmund. “I was almost ripped apart by the label.” Injuries meant that Herrlich just managed 16 games in his first season with Dortmund. Seven goals, however, indicated that he was the club’s top Bundesliga scorer together with Riedle. Dortmund defended their Bundesliga title in 1995/96 and then the following year would win the UEFA Champions League against Juventus Turin.

Although Herrlich was a vital squad member, he never reached the superstar status at Dortmund that he occupied at Gladbach. Scoring 40 goals in 128 games Herrlich’s most prominent battle came off the pitch when he beat a brain a brain tumour after a long therapy between 2000 and 2001. Following his successful battle with cancer Herrlich, however, was never the same again on the pitch and retired from professional football in 2004.

The Herrlich transfer saga in 1995 and the eventual mega transfer to Borussia Dortmund will always remain a big piece of Bundesliga history. Herrlich was one of the first key players in Germany who would force a move by using player power and open a trend that has carried on to the present day.