In the middle of July, Eintracht Frankfurt presented the signing of Danish midfielder Jesper Lindstrøm on a five-year deal. The Danish midfielder joined last year’s number five in the Bundesliga after securing his boyhood club Brøndby IF the first Danish championship since 2005, and he follows in the footsteps of Bundesliga goalkeepers Lukas Hradecky and Frederik Rønnow, who have both made the same move. Lindstrøm was Brøndby’s biggest sale since Daniel Agger to Liverpool in 2006, but what can the young midfielder bring to Oliver Glasner’s Frankfurt outfit?

Being a selling club with a chronically bad financial situation, the fan favorites at Brøndby Stadium rarely stick around for long. The same thing happened for Lindstrøm, who outgrew the Western outskirts of Copenhagen following his fantastic last season.

The story about Lindstrøm and the yellow-blue goes way back. The midfielder grew up in Brøndby territory in the western suburbs to Copenhagen in a family, where yellow and blue blood ran through the veins. He joined the club himself as a U13 player, and although he was skinny as a kid, he stood out with his vision and technical abilities.

He gained his debut on the first team in a cup game in November 2018 under head coach Alexander Zorniger, and the following season he established himself as an integral part of the first team. In the meantime, Zorniger had been sacked, and Brøndby increased focus on integrating the young homegrown talents into the starting line-up.

Lindstrøm went to play 28 league games in his first full season on the first team, starting 14 and scoring three goals. Although he was switched between the wing and the central midfield, he proved himself to be a player who could step up when it mattered the most. All three goals came in one-goal victories, and he furthermore scored twice in the Europa League. Both goals came in the extra time of the qualifying game against Lechia Gdansk, where he came on as a sub after 90 minutes, instantly making him a fan favorite. 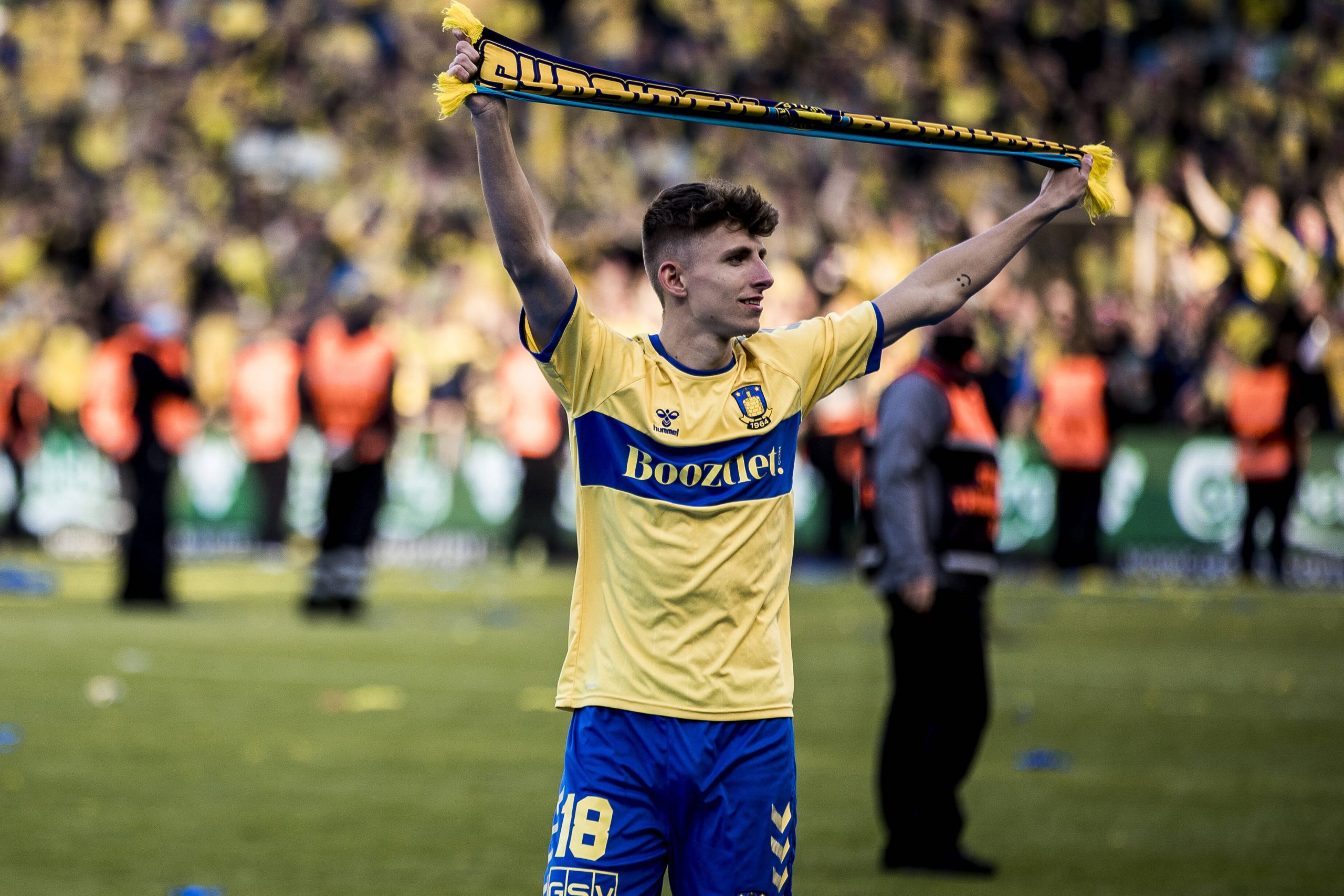 Jesper Lindstrøm was a fan favorite at Brøndby Copyright: xGonzalesxPhoto/LassexLagonix

However, it wasn’t until last season, that the Brøndby fans got to see him from his best side. During the season, he proved to be a one-man army as he scored ten goals and assisted another ten during the season. Brøndby went into the season as the third-ranked team behind high spending FC Copenhagen and FC Midtjylland, but with Lindstrøm leading the troops, they surprised everybody and won the league. It was the first championship in 16 years, and one no one had expected. Lindstrøm once again proved himself to be a player that could be relied on when it mattered the most, although he was sent off against Copenhagen in the third last game, with goals against Midtjylland, Copenhagen, and AGF who went to finish second, third, and fourth during the season.

Lindstrøm’s great form even saw him earn his debut on the Danish national team, and he was a key player on the U21 national team that reached the quarterfinal of the Euro this summer.

What does Lindstrøm bring to the Deutsche Bank Park?

After just two seasons of regular first-team football, Lindstrøm became Brøndby’s second-biggest sale ever after Daniel Agger with the move to Frankfurt. Lindstrøm has already proven himself with goals in the pre-season friendlies and looks set to play a role for the Frankfurt outfit from the beginning.

Lindstrøm had his most successful time at Brøndby when playing as the creative cornerstone on the midfield. He’s a technically gifted player who can both set up his teammates as well as score himself.

Last season he was a threat from a distance, but also proved gifted at attacking the box as the secondary wave. His five goals from outside the box were more than anyone else in the league managed. That Lindstrøm is a great finisher was proved by the fact that his xG on just 4.4, according to the official Superliga stats, was the lowest from any player who scored nine goals or more in the Danish Superliga last season. Despite the low xG, he still managed a scoring percentage of 18.9%.

Lindstrøm’s greatest strength remains his abilities in the build-up. He’s fast and dynamic, making him a crucial part of Brøndby’s counter-attacking style, and he is excellent at moving the ball forward. During last season, he had the third most sprints in the Superliga, and he had the most sprinting meters in the entire league with 37,029 meters. He can simply move the ball at a fast pace, and still keep an overview over the field and his teammates, thus ensuring that he finds the best possible way to the opposing goal.

That Lindstrøm has a great eye for his teammates was proven by the 51 chances he created for his teammates, according to Superliga.dk, the third-most in the league. Of these chances, 11 were counted as open chances, also third-most in the league. At the end of the season, he had ten assists to his name, and especially his connection with front striker Mikael Uhre was excellent as he finished as the league’s top scorer.

Lindstrøm leaves Brøndby as one of the hottest names in Danish football, and after the season he just had, his suitcase should be packed with confidence. If he can build upon his level from last season, there is no reason why he can’t develop into one of the next great Danish midfielders and become a cornerstone on both the national team as well as his new club for the next many years to come.

Toke Theilade is the former editor-in-chief at Russianfootballnews.com. He has been published in The Moscow Times, Futbolgrad, Bold.dk, The Blizzard and quoted at ESPN, BT, Ekstrabladet, The Guardian and Bleacher Report among others. He is the founder of Vilfortpark.dk about Brøndby IF, and Fantasy football site Rotoreviewer.com. He’s currently located in Malaga, Spain after having previously lived in both Denmark and Malta. Follow Toke on Twitter @TokeTheilade.