The slogan “Echte Liebe” is usually used in conjunction with Borussia Dortmund. But in days of derby defeats and a season to forget for Dortmund “true love” has somewhat faded in Dortmund. But what is true love in football anyhow? Perhaps it is Jonas Hector and his decision to stay with his club 1.FC Köln despite his club being doomed to be relegated at the end of the season.

True love, loyalty, self-sacrifice were some of the terms that come to mind when thinking about Hector’s decision to stay in Köln. After all Jonas Hector had options to head elsewhere, including Borussia Dortmund.

As a member of the national team, Jonas Hector is expected to play a major role for the German national team this summer at the 2018 FIFA World Cup in Russia. Since 2014 Jonas Hector has played 36 games for die Mannschaft.

The left-back, in fact, missed just two games during the World Cup qualification cycle and was also a key player in Germany’s victorious 2017 FIFA Confederations Cup tournament that ended with a 1-0 victory over Chile. In other words, Joachim Löw heavily banks on the defender, who without a doubt will have a place secured in the starting lineup in Russia.

Hector and his remarkable display of loyalty

With that in mind, it is remarkable that Jonas Hector has decided to renew his contract with the effzeh. “Köln allowed me to take the path from the regional league (fourth division) to the German national team,” Hector explained in a statement distributed by the club on social media on Monday.

“I am very connected and thankful to this club and feel very comfortable living in Cologne. It would have been no problem for me to switch to another club after this season, but it would not have felt right. We had many talks in the past few weeks, and I had enough time to think about it. The decision for me is clear: I belong to FC, and I want to go into the new season with this team and with these fans,” Hector concluded. 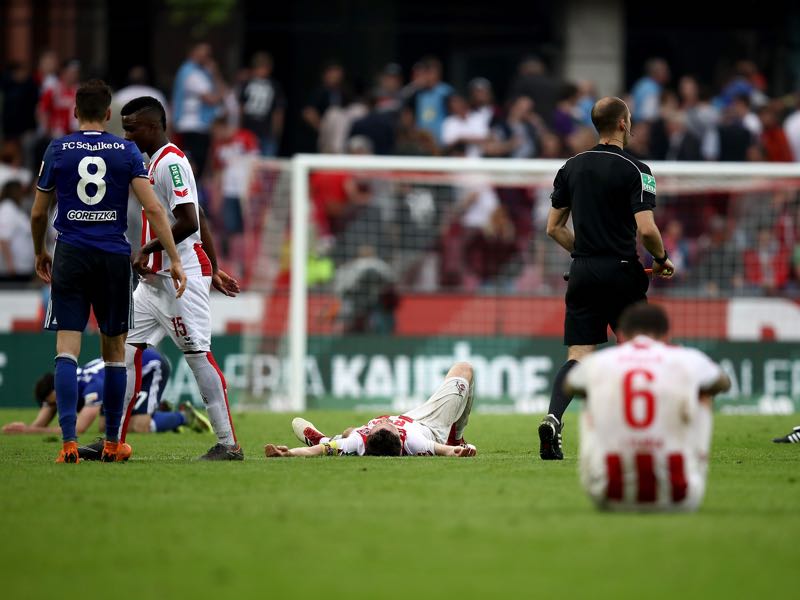 Jonas Hector and his teammates were visibly distraught after the 2-2 draw against Schalke on the weekend. (Photo by Maja Hitij/Bongarts/Getty Images)

It is a statement that fits with the tears that he was shedding on Sunday after Köln managed a hard-fought draw against Schalke. Two goals down Köln managed to fight back but fell once again short to collect the necessary points to stay in the fight. Eight points now separate Köln from the relegation playoff spot and with just three games left the Billy Goats to need the football equivalent of a Christmas Miracle to stay in the league.

As a result, there were tears shed by key players on the pitch on Sunday. It was after all a season to forget, a season that started with so much promise and hope given Köln’s first participation in European football in over 25-years. But injuries to key players, including Hector, and the failure to replace Anthony Modeste heard the club.

Köln are an odd relegation candidate

Furthermore, when one looks back over the entire season one also will have to summarize that Köln were unfortunate. Six points after the first 17 games were a disaster but did not reflect the overall performance of the club. The second half of the season has seen Köln collect 16 points and it would not be hard to imagine the effzeh to finish with over 20 points from the second half, which more closely reflects their potential and would have meant a comfortable season when putting together the two halves.

Football, however, can be brutal and a half season to forget in Germany, in a league with just 18 teams, can quickly mean the end. What is remarkable, however, is that Köln players are now willing to repair the damage and that Jonas Hector has made the first step.

Hector’s contract extension has been described by one media outlet as the silver liningto a miserable season. There is some truth to that. With Hector staying it is now possible that the likes of Timo Horn and Leonardo Bittencourt could also decide to stay and that despite the club’s relegation Köln would not need a major rebuild next season.

For Hector this means that he could jeopardise his national team career. But Joachim Löw has in the past demonstrated that he honours loyalty when he kept nominating Lukas Podolski for die Mannschaft after the striker decided to stay in Köln to help his side with promotion. Like Podolski Hector has demonstrated that “echte Liebe”, true love, still exists in football and that kissing the badge for some means true loyalty.

Loading...
Newer Post
Bayern and Dortmund to battle over Brazilian starlet Victor Bobsin?
Older Post
The past and present collide to see which Phoenix rises the highest