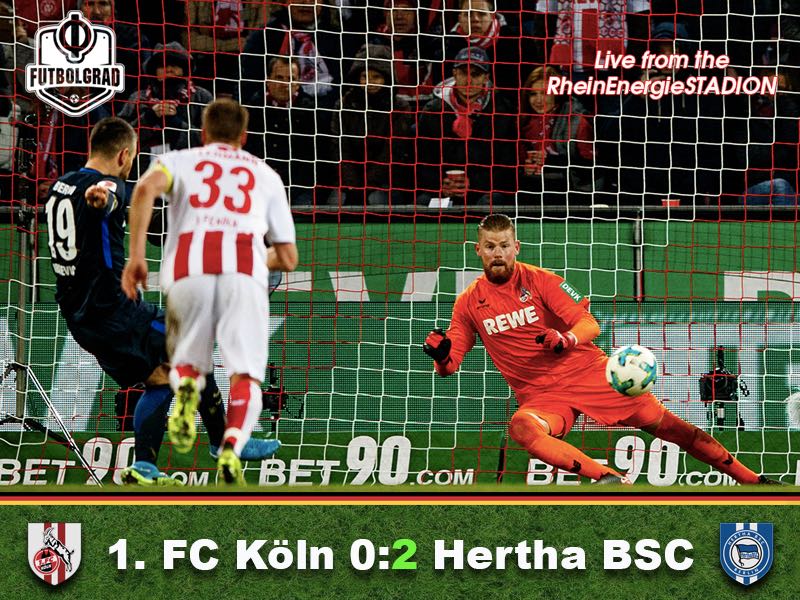 After beating Arsenal on Thursday 1.FC Köln hoped to make up some ground in the relegation zone against Hertha Berlin. But Köln v Hertha ended with another defeat to the Billy Goats, who can start planning for Bundesliga 2 football.

After Köln’s 1-0 victory over Arsenal Köln’s head coach Peter Stöger had to make some adjustments as Jannes Horn and Jhon Cordoba picked up injuries on Thursday. Cordoba was replaced by 39-year-old Claudio Pizarro and for Horn, Stöger debuted 16-year-old defensive talent Yann Aurel Bisseck. The adjustments aside Köln were the more aggressive of the two sides and Sehrou Guirassy had the first true chance of the game in the eighth minute, but his shot from 19-yards missed the goal. The missed chance, however, did little to hurt Köln’s confidence. The Billy Goats played a cultured short pass system in midfield patiently waiting for a Hertha mistake and Konstantin Rausch almost became the benefactor of Köln’s early efforts when the ball landed on his feet after a poor Hertha clearance inside the box, his shot from the left side of the penalty box, however, missed Hertha’s goal.

As it often is the case when you are in the basement, however, Köln lacked the ability to finish their chances and made an unnecessary mistake at its own end in the 17th minute allowing Vedad Ibisević an easy tap-in goal after a corner-kick. It took Köln seven minutes to recover from the shock after which Claudio Pizarro and Guirassy combined well to almost produced the equalizer with Guirassy’s curled effort from inside the box just about missing the goal. Moments later Ibisević made it almost 2-0 on the other side, but his short range effort was stopped by Timo Horn. Horn once again had to be on guard in the 30th minute with Ibisević once again squandering a chance this time placing a header right into Timo Horn’s arms. At that point, Hertha had the majority of possession (52%) and led the game with 4-0 shots on target. Hertha therefore deservedly carried the lead into halftime. Köln, on the other hand, struggled to string together more than one or two passes and played like a team on road to Bundesliga 2.

Köln came into the second half with much more energy and after a treble chance where Guirassy, Pizarro and Matthias Lehmann were all blocked and just a few moments later Guirassy’s shot was blocked by Karim Rekik. The latter action drew heavy protests by Köln’s players as Rekik appeared to have played the ball with his hand. Referee Bibiana Steinhaus then consulted with the VAR team in Cologne’s darkroom where it was decided that the game was going to continue without a penalty. Köln, however, remained the more dominant of the two teams in the early goings and should have had the equaliser when Tim Handwerker had a clear sight of the goal from the left corner of the penalty box—his attempt in the 59th minute was stopped by Hertha keeper Rune Jarstein.

Köln, however, had no match luck and were buried after Hertha were awarded a penalty in the 63rd minute. Davie Selke ran with full tempo into Köln’s box and was brought down by Matthias Lehmann. Steinhaus had no choice, but to award, the penalty and Ibisević made no mistake converting the spot-kick. The second Hertha goal killed the atmosphere in the RheinEnergieStadion with Köln fans coming to the realization that their side is unlikely to turn around a lost season. The Billy Goats in the meantime tried to stem themselves against the defeat, but could not break down a well organized Hertha defence. Hertha, in fact, controlled the game after the second goal without ever being in danger of conceding a goal and were deserved winner here at the RheinEnergieStadion.

Vedad Ibisević was the man of the match. The 33-year-old Bosnian was at the centre of every single Hertha attack and scored two goals to win the match for Berlin. Furthermore, head coach Pal Dardai can now be confident that Ibisević and Davie Selke can play together effectively. 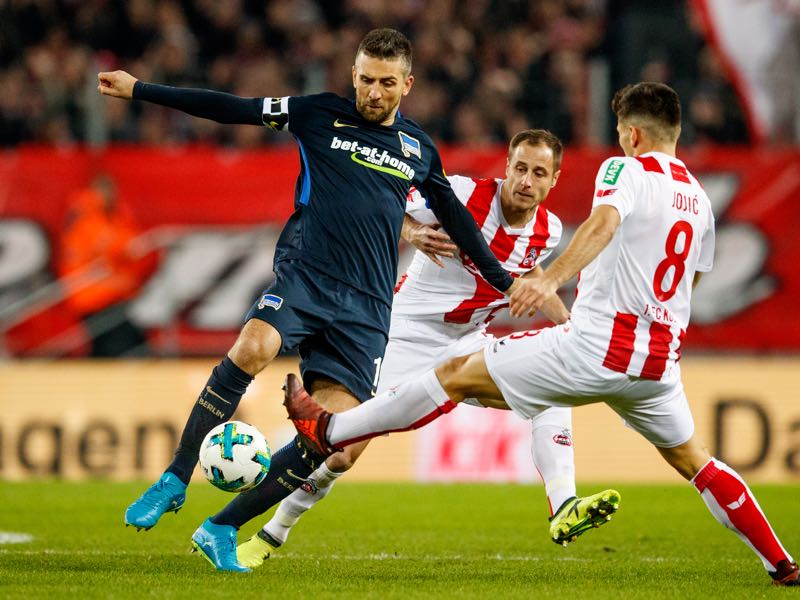 Köln v Hertha – Vedad Ibisević was the man of the match. (Photo by Lars Baron/Bongarts/Getty Images)

After having collected just two points in 13 games Köln are on course for Bundesliga 2. It is, therefore, no surprise that the club has started to think about making structural changes. Hannover 96 sporting director Horst Heldt remains a candidate to take over the management of the Billy Goats. For now, the club also appears to continue with head coach Peter Stöger as vice-president Toni Schumacher explained in the German football talk show Doppelpass on Sunday morning. Despite their confidence in head coach Stöger, however, talk about the head coach will certainly pick up as Köln are sinking quicker than the Titanic at the moment.

Peter Stöger: “The more experienced team won the game. Once we were behind it was clear that it would be difficult. We weren’t able to turn the game around.” On VAR: “I have seen it, but I think the decision was correct. Not surprised we didn’t get the penalty.”

Pal Dardai: “Compliment to my team and respect to the win. We haven’t won on the road in a while. There was a danger that we would underestimate Köln. We only spoke about ourselves ahead of the match. The first goal was the difference maker as it allowed us to control the match.” On the Selke and Ibisević: “Ibisević is the more experienced and Davie is physical more presence. We can still improve the play together. But we played with lots of young players and it is getting better. Look at Köln and how difficult it can be to play with a young team.” On VAR: “I haven’t seen that particular incident.”