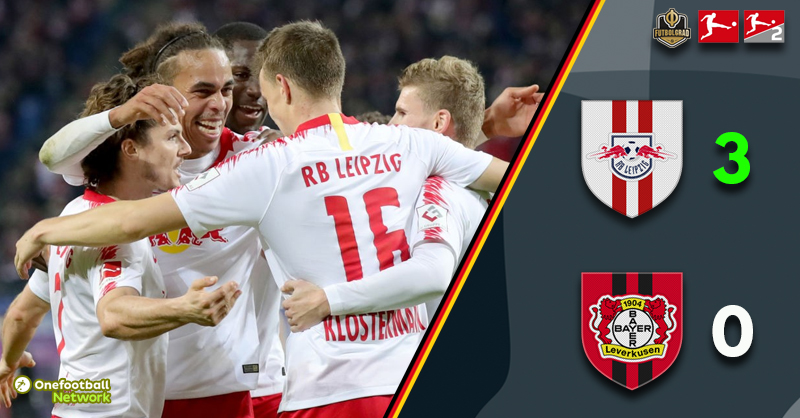 Leipzig v Leverkusen ended with a 3-0 victory for Die Roten Bullen managed to build on a brilliant start to the season by heaping more misery on a Leverkusen side that could undergo some significant changes during the international break.

It took eight minutes until the first chance materialised. Timo Werner broke through on the right but Marcel Sabitzer missed the ball inside the six-yard box, and the chance was gone. Leipzig dominated the early stages. Werner had another chance in the 11′ minute, but his curled effort was tipped over the bar by Lukas Hradecky, and at the ensuing corner Hradecky had to do well to save Upamecano’s header.

Leipzig were the more dominant team at the opening stage and in the 28′ minute took the lead. A lopped pass from Diego Demme found Yussuf Poulsen inside the box, and the Danish striker tipped the ball over Hradecky’s head. The goal was then initially waved off for offside, but upon review, it became clear that Poulsen had been onside and the goal stood.

The pressure was now on Leverkusen as Leipzig produced further chances. In the 31′ minute Werner broke through on the right, and his low pass found Kevin Kampl open on the far post, his shot, however, only hit the side netting. Leverkusen, in the meantime, struggled to get into the game as Leipzig effectively shut down all the attacking lines in their defensive end.

Leipzig would then seal the deal. In the 68′ minute, Sabitzer won the ball in Leverkusen’s defensive third and poked the ball to Lukas Klostermann, who had joined the rush forward, and the right-back made no mistake beating Hradecky with a low drive to the far corner of the goal.

Werner then should have then added a third in the 75′ minute. A ball through the channel found Werner going one-v-one with Hradecky and the keeper spread out to keep Werner from scoring. Going the other way Leverkusen then won a freekick on the other side of the pitch and Peter Gulacsi had to do well to keep Leon Bailey off the scoresheet in the 76′ minute.

Instead, Leipzig added a third after a defensive error by Leverkusen. In the 85′ minute, Klostermann challenged Dominik Kohr deep in Leverkusen’s half, and the ball ricocheted to Poulsen inside the box, and completely unmarked the Dane made no mistake to score his second.

Yussuf Poulsen was the man of the match. The 24-year-old Danish striker scored his fifth and sixth goal of the Bundesliga season, and after 11 Bundesliga games has already broken his goalscoring record. Poulsen has never managed to score more than five goals a season. But ahead of this season, Poulsen promised that he would increase his goalscoring rate and the 24-year-old is without a doubt delivering at the moment. 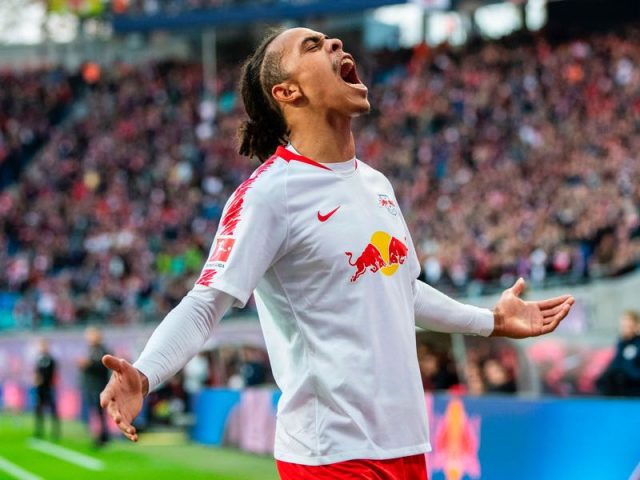 Leipzig jump ahead of Bayern München in the standings. Now third with 22 points after 11 games Leipzig could be one of the surprise title challengers of the season. Leverkusen, in the meantime, are in trouble. Leverkusen could be 14th at the end of this matchday and with no improvement in sight the upcoming international break could see some changes coming among the coaching staff. Leverkusen have a talented side but the management and coaching staff around Heiko Herrlich have failed to address serious shortcomings in this side and to utilize the existing talent in the right way.