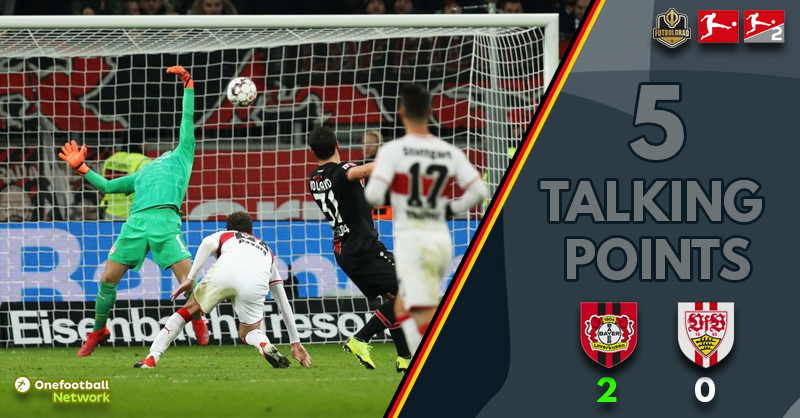 Leverkusen vs Stuttgart welcomed the Bundesliga back from its international break. The hosts left it late but eventually overpowered Stuttgart with a two-nil win courtesy of a Kevin Volland brace.

Youth sensation, Kai Havertz, was heavily involved once again for Leverkusen – however, Stuttgart were left lamenting over an early penalty shout that was denied. 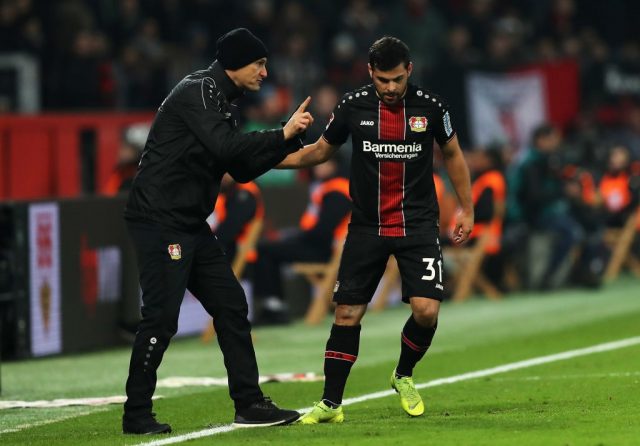 Kevin Volland had three opportunities to score in the first half, firing over the bar after some nice work with Karim Bellarabi and missing two difficult efforts before the break. His best chance came on the hour mark after a fast break, blazing over the bar from close range under pressure from Erik Thommy.

Volland continued to put himself in positions to score and got his reward with 15 minutes remaining. Some sloppy defending saw him unmarked at the back post where he headed in a Havertz cross to put Leverkusen one-nil up.

His second goal was a lovely finish after another fast break, smashing the ball past Ron-Robert Zieler from the edge of the area to put the match beyond doubt. Volland then started the move that led to Lucas Alario slotting home, but the goal was ruled out for a marginal offside.

Doing some of his best work on the right wing earlier this season, Volland has moved back up front and was the star here but needs to show it on a more consistent basis. It’s a similar concern that could be applied to some of his teammates and Bayer Leverkusen as a whole. 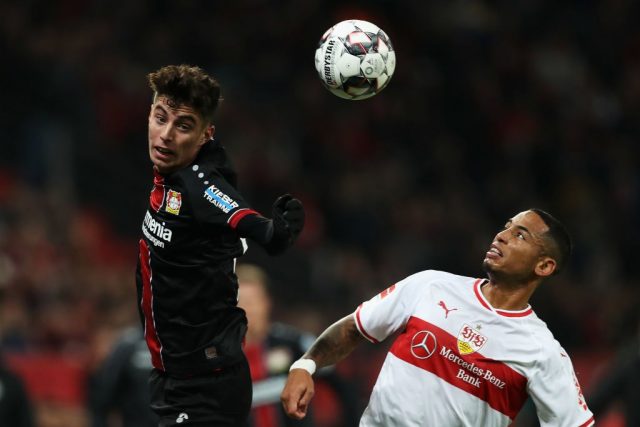 Kai Havertz once again shone as the best player on the pitch during Leverkusen vs Stuttgart. (Photo by Maja Hitij/Bongarts/Getty Images)

The praise and hype surrounding Havertz is fully deserved. It’s incredible that a player who only turned 19 at the beginning of the season has become the best – and most consistent – player at Bayer Leverkusen.

Havertz had a shot punched away by Zieler early on before a sumptuous lob found Tin Jedvaj behind the defence with the left-back unable to find the target. Some silky combination play with Julian Brandt went close to breaking the deadlock but the attacking midfielder kept probing and was instrumental in Leverkusen’s opener.

Winning a corner, Havertz received it short and delivered a pinpoint cross for Volland who headed in at the back post. Jonathan Tah then produced a fine challenge with the ball finding Havertz, an instinctive pass releasing Alario who found Volland for Leverkusen’s second goal.

Havertz has all the skills, attributes, understanding, accuracy and vision normally associated with players much older and vastly more experienced. He really is special and it will be fascinating to follow what should be a long and magnificent career.

Leverkusen vs Stuttgart : Stuttgart unlucky early on but second best throughout 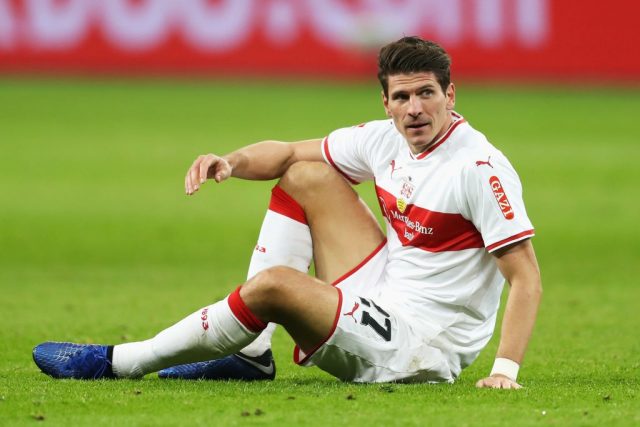 Mario Gomez picks himself up off the ground during Leverkusen vs Stuttgart. (Photo by Maja Hitij/Bongarts/Getty Images)

Markus Weinzierl started with Andreas Beck and Pablo Maffeo on the right edge for the second straight game and could have been celebrating a penalty in the opening minutes. Maffeo looked to have been caught by a trailing leg from Charles Aránguiz on the edge of the area but no foul was awarded and VAR didn’t get involved.

However, it was clear that Stuttgart’s intention was to keep things tight and nullify the threat of Leverkusen’s wingers particularly Karim Bellarabi. Nicolas Gonzalez, so often one of Stuttgart’s most dangerous weapons this season, was reduced to tracking back to help Emiliano Insúa and couldn’t get involved in attack.

The visitors had half chances to score with Mario Gomez coming closest to a goal, but he was so isolated with little threat out coming from out wide or through the middle. It’s not going to be pretty watching the Swabians for the remainder of the season.

This is a poorly assembled team that needs major surgery in January. The player they need is Daniel Didavi but his injury problems are well documented and it’s unlikely he will ever be able to string enough games together to be an effective solution. 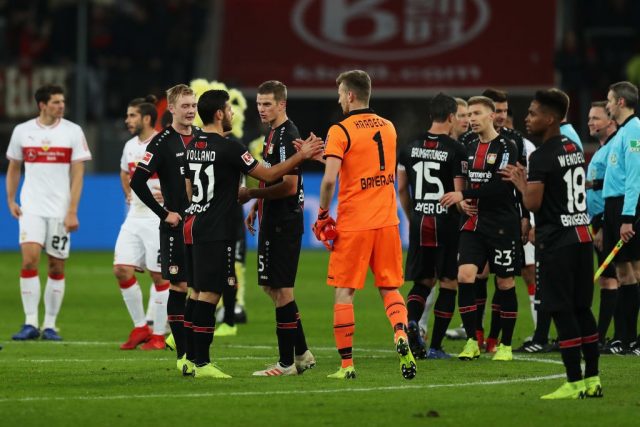 The Leverkusen players celebrate after victory against Stuttgart but the three points came via a far from convincing win. (Photo by Maja Hitij/Bongarts/Getty Images – Leverkusen vs Stuttgart)

It’s no secret that Bayer Leverkusen have under-performed this season. A 2-0 home win against rock bottom Stuttgart was mandatory and does little to ease the suspicion that a top six spot is beyond Heiko Herrlich’s side.

There is no doubt getting Charles Aránguiz and Julian Baumgartlinger back from injury is a big boost which makes them harder to break down and stronger in transition. It almost seems that Leverkusen should allow the opposition to attack such is their strength on the fast break.

The facts remain however. Every time Leverkusen have played a team in the top six in the Bundesliga this season they have got smashed. Defeats against Borussia Mönchengladbach (2-0), Bayern Munich (3-1), Borussia Dortmunf (4-2), Hoffenheim (4-1) and Leipzig (3-0) speak for themselves.

A five-nil win at Borussia Mönchengladbach in the DFB-Pokal showed what Leverkusen are capable of, the problem is that we see it so infrequently that is gets forgotten rather rapidly. 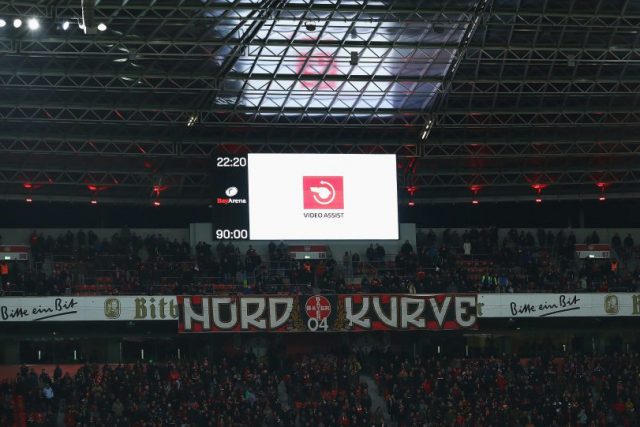 The Video Assistant Referee is signalled as ‘in use’ during Leverkusen vs Stuttgart. (Photo by Maja Hitij/Bongarts/Getty Images)

I’ve previously mentioned the issues with VAR, namely the confusion inside the stadium with spectators having no idea why decisions have been made.

This evening we saw a questionable decision not to award Stuttgart an early penalty, but another decision highlighted more problems with the VAR system.

Insua clearly handled the ball outside the area with referee Robert Schröder awarding a penalty. Despite replays showing the error without any doubt, the amount of time taken to reverse the decision was worryingly long and surely unnecessary, despite Schröder staying in the penalty box throughout.

Both sets of supporters then took turns in chanting the often used ‘Scheiße DFB’ and it’s about time the authorities took notice and fixed some of the issues with VAR.