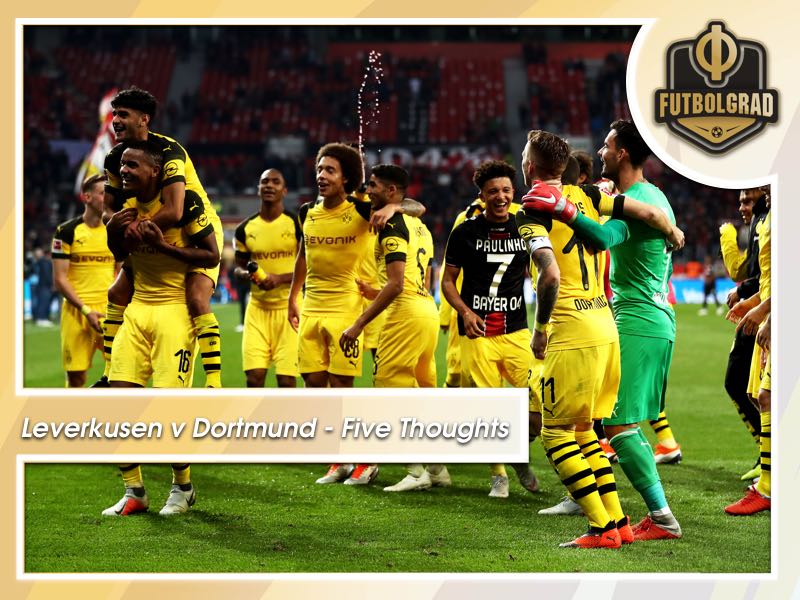 LEVERKUSEN — Borussia Dortmund produced a stunning comeback to defeat Bayer Leverkusen 4-2 after trailing 2-0 at half-time. Leverkusen v Dortmund produced some scintillating attacking play put the hosts to the sword in the second half, Heiko Herrlich’s side falling apart in dramatic fashion.

Hosts dominate the first half

Bayer Leverkusen started with intent and displayed confidence befitting a team that had won three straight matches. An effective high press kept them on the front foot, and they capitalised as Lucas Alario’s cross fell to Mitchell Weiser who produced a great strike that flew into the bottom corner.

The Werkself were closing Dortmund down out wide, Kevin Volland and Julian Brandt helping their full-backs in defence with the visitors looking slow, lethargic and out of ideas. A Marco Reus free kick tested Lukás Hrádecky who made a good save, Dortmund’s best chance of the half.

Leverkusen extended their lead shortly before the break as they punished Dortmund for failing to clear a corner. The ball fell to Jonathan Tah who took his time and fired home to make it 2-0, Leverkusen going into half-time firmly in control of the match.

Tide turns into a tsunami

Everything Leverkusen were doing well in the first half seemed to disappear after the break, the high press and organisation fading away which allowed Dortmund to grow in confidence. Mahmoud Dahoud replaced Thomas Delaney and was keen to get involved and push the visitors forward.

Reus combined with Jacob Bruun Larsen with Reus shooting over the bar as the game became an open affair. Volland had a great chance to put Leverkusen 3-0 up but his shot hit the post, Lucien Favre reacting by bringing on Paco Alcácer for Maximilian Philipp. 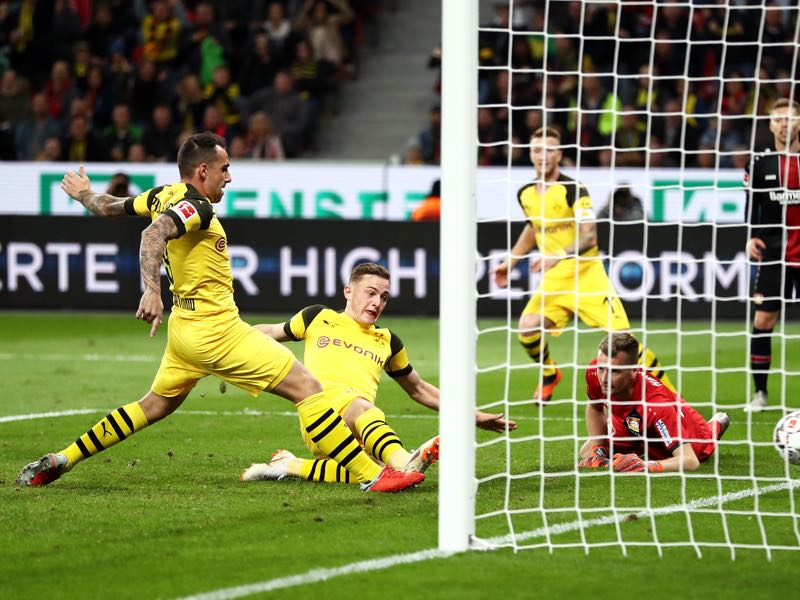 Leverkusen v Dortmund – Jacob Bruun Larsen of Borussia Dortmund scores his sides opening goal to make the score 2-1 during the Bundesliga match between Bayer 04 Leverkusen and Borussia Dortmund at BayArena on September 29, 2018 in Leverkusen, Germany. (Photo by Lars Baron/Bongarts/Getty Images)

It was a turning point in the match with Larsen having a shot saved before Dortmund got a goal back. Achraf Hakimi’s cross found Reus at the back post, his shot was saved but Larsen pounced and fired home from close range.

Jadon Sancho replaced Christian Pulisic and took just one minute to get involved, running down the right wing and combining with Reus who smashed it into the back of the net. Alcácer saw his shot deflected wide but Dortmund didn’t take long to take the lead, some lovely build up play resulting in a Hakimi cross to Alcácer who produced a deft flick to make it 3-2.

Tah missed a chance to equalise with a close range header as things went from bad to worse in added time. Another Dortmund counter attack saw Hradecky caught up field, Sancho finding Alcácer who passed the ball into an open net to complete the rout.

Capitulation might be too strong a word to describe Bayer Leverkusen’s failure to capitalise on a solid first half. Nothing should be taken away from Dortmund, who produced a memorable fightback after looking second best for the opening 45 minutes.

Final thoughts from the BayArena as Borussia Dortmund come from 2-0 behind to triumph 4-2. Talking points up shortly at @FutbolgradLive pic.twitter.com/hkYe4HhYZd

However, the organisation, work rate and shape that defined Leverkusen’s first-half went missing after the break. Julian Brandt was frequently caught up field and provided no help for Wendell who became increasingly isolated and targeted.

Jadon Sancho was brought on specifically to take advantage of the situation and produced an assist for Reus within 60 seconds. Herrlich tried to correct the situation by moving Volland and then substitute Leon Bailey to the left wing, but the damage was done as Leverkusen were unable to regain any form of control.

Favre has a vast array of attacking weapons at his disposal which means that Dortmund always have the ability to turn things around off the bench. 12 of their 22 competitive goals this season have been scored after the 70thminute with substitutes often delivering the goods.

It was no different here as Sancho produced two assists and Alcácer scored two goals. It’s a nightmare for the fatigued players in the opposition ranks who simply chase shadows and can’t keep up with Dortmund’s pace and movement.

The title race is on?

Borussia Dortmund’s victory moves Die Schwarzgelben to the summit of the Bundesliga table, overtaking Bayern Munich which will no doubt start talk of a potential title race. It’s still early days and we can’t forget what happened last season, but there is no doubt Favre’s side have the ability to beat anyone on their day.

The Bavarians will inevitably bounce back, but Dortmund are currently showing that the Favre project might be ahead of schedule. Let’s hope they can keep it going, they are the best equipped to mount a challenge and as we all know, anything is possible.