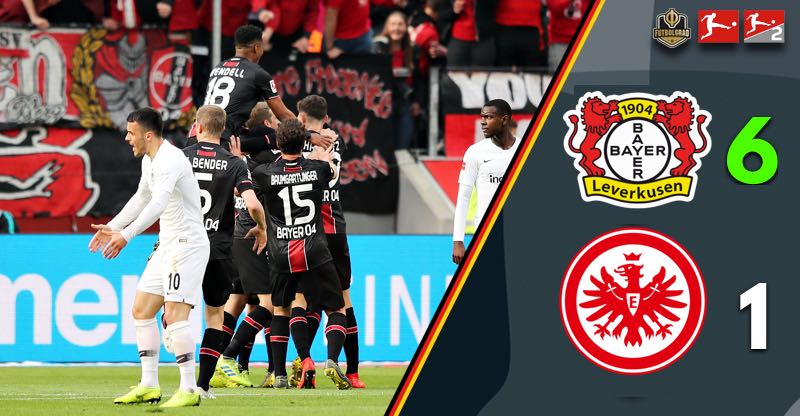 Leverkusen v Eintracht Frankfurt – Bayer Leverkusen scored six first-half goals as they defeated Eintracht Frankfurt 6-1 to move into fifth position, one behind Frankfurt on goal difference. Kai Havertz and Julian Brandt put the hosts 2-0 up after 13 minutes and despite a Filip Kostic deflected effort reducing the deficit. It was one-way traffic for the rest of the match.

It took just two minutes Bayer Leverkusen to take the lead, Julian Brandt releasing Charles Aranguiz who crossed to Kai Havertz. The 19-year-old superstar was allowed too much space to take a touch and fire past Kevin Trapp from the edge of the box.

Leverkusen were playing some lovely football, passing and moving into space which had Frankfurt chasing the ball. It was soon 2-0 as Kevin Volland’s cross found Lars Bender who laid it off to Charles Aránguiz, the Chilean’s miscued shot finding Julian Brandt who had an easy job to steer the ball home from close range.

Eintracht’s defence was looking lost at sea, and Ante Rebic was an isolated figure up front. The visitors managed to get a goal back as a long-range strike from Filip Kostic took a wicked deflection off Jonathan Tah with left Lukas Hradecky helpless.

It was only a brief reprieve as the hosts soon got back on the front foot. Julian Brandt and Havertz combined with Brandt crossing to Volland who saw his shot cleared off the line by Makoto Hasebe.

Wendell then went close with a shot from a distance before more exquisite combination play from Brandt, and Havertz resulted in another goal. Volland’s shot was tipped wide by Trapp, Lars Bender on the spot to cross for Lucas Alario who headed in from close range to make it 3-1.

Bayer Leverkusen smelled blood in the water, were attacking with vigour and in the 28thminute it was 4-1. Brandt played in Charles Aranguiz who barged past Hasebe and fired into the roof of the net.

Five minutes later it was 5-1. Volland got the better of David Abraham and crossed to an unmarked Lucas Alario who couldn’t miss from a yard out.

Frankfurt’s individual and collective defending resembled a horror show, a nightmare from which they couldn’t wake up, and two minutes later Leverkusen made it 6-1. Brandt’s free-kick was headed into his own net by Martin Hinteregger with Adi Hütter finally forced into action.

Mijat Gacinovic and Luka Jovic replaced Evan Ndicka and Jetro Willems, but the tide refused to turn, a Lars Bender cross finding Brandt who shot over the bar. The first half ended with two frustrated Frankfurt players earning cautions as Hinteregger, and David Abraham went into the book.

It was a tremendous half of free-flowing football as Leverkusen’s six goals in a half matched Borussia Mönchengladbach who were the last to achieve the feat against Borussia Dortmund in 1978.

The second half was always going to struggle to live up to the first, and so it proved. The Werkself had multiple opportunities to extend their lead but failed to make them count.

Alario’s clever back heel released Brandt who in turn freed Volland, his cross finding Havertz who forced a save from Trapp. Havertz shot over the bar, Brandt had an effort saved, but the seventh goal wouldn’t come.

Substitute Paulinho shot wide, and Volland fired over, but it couldn’t detract from a pristine performance from Leverkusen. Their first-half effort was more than enough to secure all three points which takes them to 54 points, level with Frankfurt with just two matches to play.

Havertz and Brandt played some scintillating football, but Charles Aranguiz gets my man of the match award. The box-to-box midfielder has been in fine form since returning from injury this season and is exceptional at using space.

Aranguiz was involved assisted Leverkusen’s first two goals and scored the fourth in arguably his and his team’s best match of the season. 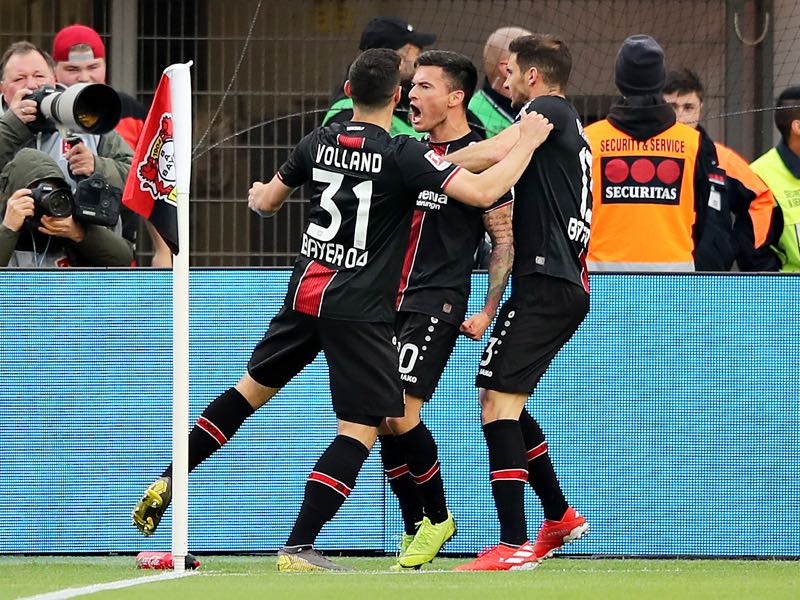 Eintracht Frankfurt’s UEFA Europa League campaign has been brilliant, but it could derail their top four aspirations. The Eagles have looked tired at times, and Sebastian Haller’s injury has come at the wrong time of the season.

Bayer Leverkusen fully deserved all three points after a scintillating first half, and they made the visitors pay. Bosz’s side have won four straight and are in a great position to capitalise on Frankfurt’s failures in the past few weeks and jump into the fourth spot.

FT Bayer Leverkusen 6-1 Eintracht Frankfurt. Football doesn't get much better than the first half here unless you support Frankfurt. Brilliant! Some words up shortly @FutbolgradLive pic.twitter.com/bRJv2tcRes