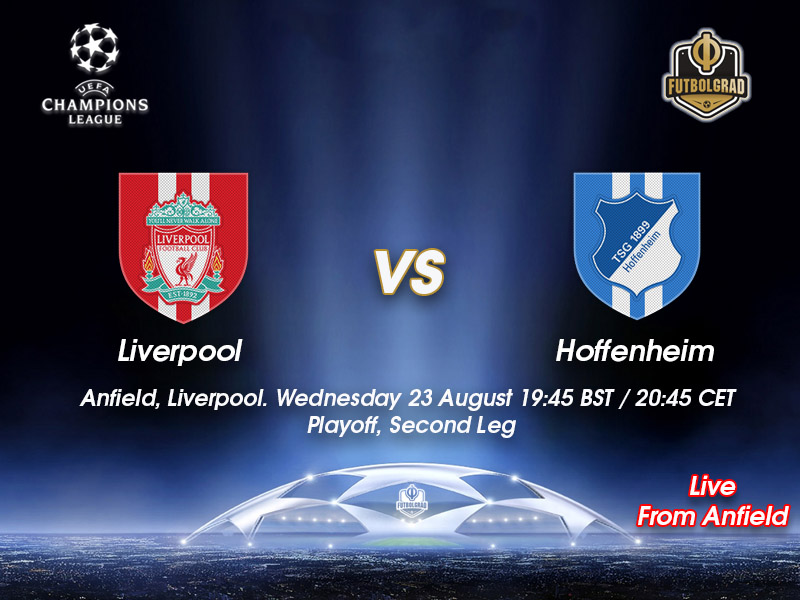 Welcome to Liverpool v Hoffenheim minute by minute report from Anfield. The Futbolgrad Network‘s Chris Williams is live on location in what promises to be a highly entertaining match between last season’s fourth placed team in the English Premier League and the German Bundesliga.

Man of the Match – Sadio Mané

A constant thorn in the Hoffenheim side the Liverpool attacker was imperious.! Our man to watch in the preview turned out to be one of the main differences tonight. However, in total Liverpool were simply too good for their German visitors.

Liverpool progress into the Champions League Group Stage whilst TSG Hoffenheim drop into the Europa League. The hosts too hot to handle.

Hoffenheim with a corner, one final chance? It’s cleared by Liverpool easily.

Yellow card for Hübner – he must have said something the referee wasn’t keen on.

Five minutes left – Liverpool attack down the right again, Firmino crosses the ball on the floor but Baumann collects. The ball is launched forwards and Mignolet collects. It’s end to end I’ll give you that.

Even at 6:3 on aggregate neither side look to be slowing down. Liverpool are still searching for a fifth and TSG a third. What a crazy game!

It’s been a breathtaking fixture, Liverpool have been excellent and have so far not let Hoffenheim get a foothold in the match for any length of time. Nagelsmann looked very confident in yesterday’s press conference. Too confident maybe?

Nagelsmann – We can cope with Liverpool’s fast attack, we have shown this ability in the Bundesliga last season #UCL #LFCTSG

Hoffenheim win possession, but their Liverpool hosts are giving a textbook performance in Gegenpressing – they win the ball back immediately. Klopp is very happy and punches the air!

Two goal Emre Can comes off as Liverpool bring on their second substitute – James Milner. The German midfielder had an excellent night, he’ll be happy as will the watching national team coach Joachim Löw

Hoffenheim with a sniff at goal — however, Lovren thwarts the danger at the last moment.

Emre Can sprints down the wing and bends in a dangerous cross, but Baumann is equal to it. Liverpool with no sign of taking their foot off the gas.

Liverpool make their first substitution of the night. Gomez comes on for the exceptionally impressive Alexander-Arnold.

Henderson gegenpresses the visitors and slides the ball to Firmino who slots home Liverpool’s fourth of the night.. Game over? Maybe just maybe.

Mignolet has a shakey moment, he drops the ball from a cross and drops the rebound from his drop. The Liverpool goalkeeper just about escapes — Did any of the sellout Anfield crowd see it? Oh, yes, the all did.!

Hoffenheim made a substitution during all the action! The wasteful Gnabry leaves the field, replaced by Adam Szalai

Mané finds himself clear of the TSG defence again but Baumann saves well, the referee does award a corner this time

Matip with a sloppy clearance and TSG are in behind the LFC backline, the chance is wasted.

Panic at the Hoffenheim back line. Vogt and Hübner get in a mess and just about clear their lines.

Liverpool corner — Moreno whips the ball in, Can heads the chance over the bar. Again it is the home side who have settled quickest.

Hoffenheim loft the ball into the Liverpool box, but who is back there defending? Sadio Mané – That typifies his display this evening.

Liverpool carry on the attack. Alexander-Arnold curls the ball into the box, it flashes across the six-yard box but evades the Liverpool attackers.

What awaits us? Surely we can’t have a second 45 minutes as intense as the first! Will LFC extend their lead or will TSG provide the comeback to end all comebacks?

Kick Off – Second Half (Liverpool)

Liverpool get the second half underway.

Liverpool simply too hot to handle. With some sumptuous play they blew Hoffenheim away early on. TSG will still believe they can mount a comeback, especially with Uth and Gnabry creating good chances.

Henderson receives a yellow card for a stamp on Demirbay

Uth goes close again, he’s been the main danger since he came on. Mignolet saves well.

Wagner and Hübner are openly arguing – Nagelsmann needs to calm his players down during the break.

Emre Can goes close, very close. The German almost scored his third, the curling shot just bends out of play – just past the right side post.

Gnabry again with a good opportunity, but he pulls the shot wide. On another night the winger could have had a hat-trick.

Mané is cynically brought down by Kaderabek who receives a yellow. Hoffenheim beginning to show some hot heads.

Some wonderful interplay by Liverpool ends with Firmino stabbing the ball towards the goal, Baumann saves an almost certain fourth for Liverpool

Referee Orsato brandishes his first caution of the night, it goes to TSG’s Geiger

Uth seems to have brought an almost instant balance to the Hoffenheim play, they look as lot more competent with him on. TSG now starting to win more of the midfield battles.

Nagelsmann’s substitution pays dividends almost instantly. Uth drives the ball past Mignolet…… Surely not… They can’t can they..?

Hoffenheim finally break into the Liverpool box. Gnabry slides the ball past a stranded Mignolet, but the ball drifts wide. It was a massive chance, gone begging.

An early tactical substitution from Nagelsmann.. Uth comes on for Nordtveit

Hoffenheim have been simply blown away by the occasion and the sublime play by Liverpool. The harshest of European lessons now looks likely. This could be a cricket score.

Liverpool with some unbelievable play, they cut Hoffenheim wide open. Firmino dinks the balls across the box and Can side passes the ball into the net. Incredible, absolutely incredible.

Gnabry goes through, he’s brought down in the Liverpool box, but it’s fairly in the eyes of the referee, he waves away the protest for a penalty.

Salah with the easiest goal he’ll score this season, taps the ball into an empty net from a rebound off the Hoffenheim post.

Kramaric tries to take the attack on himself, he dances past 2 Liverpool defenders but there is no support for the attacker.

Liverpool with another dangerous free kick opportunity – left hand side of the box. Moreno whips it in but Winjaldum can only head into the hands of Baumann.

The Anfield crowd can smell blood – The noise is incredible Liverpool are spraying the ball around like a training match.

Mané back heels the ball to Can who steers the ball into the net, an emphatic start by Liverpool

Wow what a start, it’s breathtaking from Liverpool, TSG look a little frozen. Will the big occasion get to them?

Alexander- Arnold is hacked down mid-flight on the right hand side of the pitch, the free kick is whipped in and TSG scramble it clear.

TSG now have found some of the ball, Gnabry finds himself unmarked but he’s offside, first real show of intent from Hoffenheim.

Mané breaks free he’s one on one but Baumann saves well, the rebound falls to Can but he can’t get a shot off.

Alexander-Arnold takes the free kick, it cannons off the wall and falls to Salah, the forward can only head over.

The teams are on the pitch to warm up. 30 minutes to go! #LFCTSG #LFC #UCL pic.twitter.com/QYnrBPunTK

Just over 45 minutes until kick off. The TSG fans are already in and making themselves heard.

.@achtzehn99 fans are in early and in good voice. Just over 45 mins until kick off.! @ChampionsLeague #LFCTSG pic.twitter.com/bxOLcqECsb

We’ve made it! Live from Anfield for one of the biggest games so far this season. Hoffenheim are chasing a 1:2 scoreline from the first leg. Can they become the first German side to win at Anfield and complete a remarkable turnaround? Or will five times Champions League winners, Liverpool, march on to the group stages?