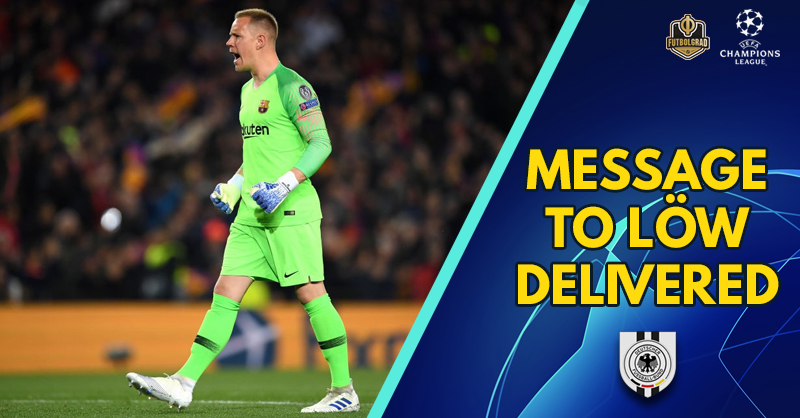 Marc-André ter Stegen sent the biggest message yet on Wednesday night to German national manager Joachim Löw that he is ready for the coveted number one slot – now.

The Barcelona goalkeeper underpinned a wonderful team performance that saw Lionel Messi grab all the headlines – however, when Liverpool threatened to overrun the hosts in their own backyard, it was the 27-year-old who provided the catalyst for Messi’s seven-minute masterclass.

Before the match, ter Stegen spoke about the need for Barcelona to control the game; something they failed to do for the most part.

Jurgen Klopp’s Liverpool created a number of golden opportunities to grab an all-important away goal, but the Monchengladbach native was there to frustrate the travelling Reds at every turn. 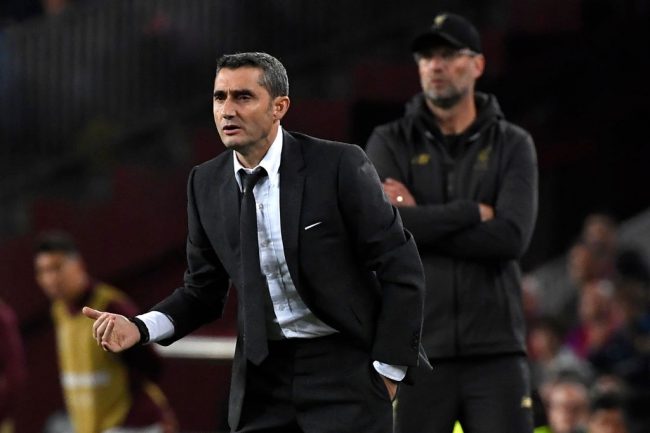 Ernesto Valverde spoke on the importance of Marc-André ter Stegen but wouldn’t be drawn on the choices of Joachim Löw. (Photo: LLUIS GENE/AFP/Getty Images)

Ernesto Valverde spoke on the importance of ter Stegen to the Futbolgrad Network after the final whistle:

“We are really happy with Marc, he is a world-class goalkeeper. He has got a very high level, he proves it every day.

He has helped us on a couple of occasions in the second half”.

The occasions Valverde referred to were crucial. Barcelona had a slim advantage, thanks to a Luis Suarez first-half strike. As Liverpool stepped into a familiar looking groove, both James Milner and Mohamed Salah should have flipped the semi-final on its head.

It was the ability and agility of ter Stegen that denied them, ultimately allowing Messi to capture world headlines.

Something Manuel Neuer – Germany’s current number one – was unable to do against this Liverpool side eight weeks earlier.

The Bayern keeper made a number of errors – most notably allowing Sadio Mane to loft his shot into an empty net, setting up a memorable night for Jurgen Klopp in the Allianz Arena.

Valverde was unprepared to get into the thought pattern of Löw – choosing Neuer over ter Stegen at every given opportunity.

“I don’t think it is for me to say what happens in the German national team, but if he [ter Stegen] doesn’t play he is a bit more rested – and that is good for us” the Spaniard added diplomatically.

The result saw ter Stegen end the fixture with seven Champions League knockout clean sheets at the Camp Nou. During the same period, the German has conceded just five goals.

His record against English sides in the competition is just as impressive. Liverpool were the fourth side from the Premier League that the Barcelona ‘keeper has shutout.

Manchester City, Manchester United and Chelsea all failed to find the net along with Wednesday night’s visitors – only Arsenal managed to breach his goal-line, back in 2016. 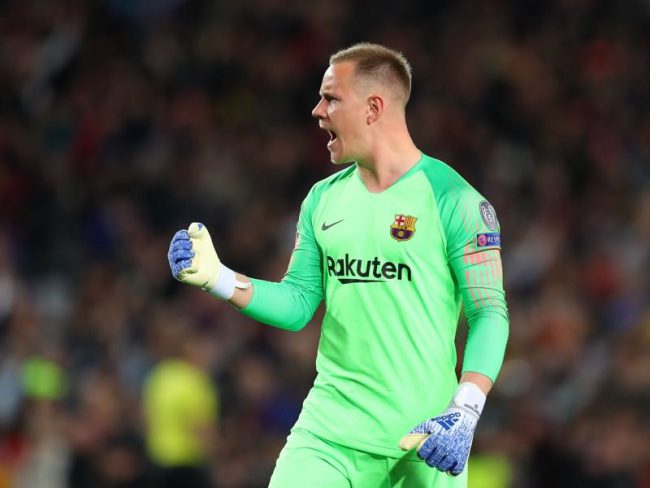 The German took to social media after the game to express his thoughts on a thrilling first leg:

“An amazing night at the Camp Nou! An intense match in which we all worked hard for the result.

Simply amazing support by all of you: our fans, to get us there.

The second leg will be intense and tough, but we will give everything to make it to the final. Our mission continues next week!”

An amazing night at Camp Nou! An intense match in which we all worked hard for the result. Simply amazing support by all of you: our fans, to get us there. The 2nd leg will be intense and tough, but we will give everything to make it to the Final. Our mission continues next week! pic.twitter.com/AMAOx8CVHo

What Löw does next will be watched with great interest, ter Stegen has staked his claim for the number one slot on the biggest of stages – outshining the player he currently plays second fiddle to in almost laboratory-like conditions.