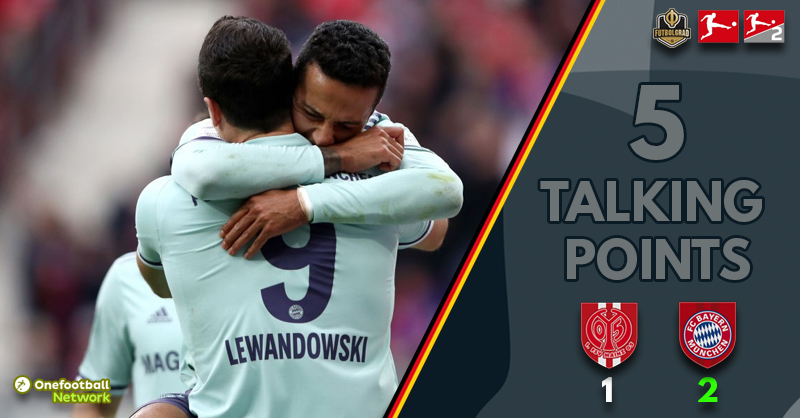 Opel Arena – Mainz v Bayern München ended 1-2 in a match that was unnecessarily tight in the final stages. Leon Goretzka’s opener was cancelled out by Jean-Paul Boëtius, but Thiago Alcántara’s winning goal was enough for the Bavarians to reduce the gap behind Borussia Dortmund to two points.

It’s no secret that Bayern München are a superior team to Mainz. The Bavarians are expected to beat Mainz in every match and more often than not they secure victory. Today was no exception, with Bayern’s right edge of Joshua Kimmich and Thomas Müller causing havoc and a large reason for their success.

The nervy finale to the match could have been avoided had Niklas Süle taken his 1 on 1 chance and a long range Javi Martínez strike not hit the post. However, Thiago and Robert Lewandowski showed once again that they are exceptional footballers and were influential throughout.

FC Bayern haven’t been playing at their highest level for some weeks, and their performance was another reminder of how much they can improve. Relying on individual talent and class will earn them victories more often than not, but Niko Kovac’s side need to play better as a team to compete against the best in Europe.

Knowing what Joshua Kimmich is going to do and stopping him are two completely different things. Bayern’s right back spends more time pushing into the opponents half than defending, and when combined with Müller occupying Aaron Martin as he did today, the result is constant overload.

Kimmich was heavily involved and went close to opening the scoring with a fierce shot that rebounded off the underside of the crossbar. He turned provider not long after, with a cross that found Leon Goretzka who produced a fine volley to put Bayern into the lead. 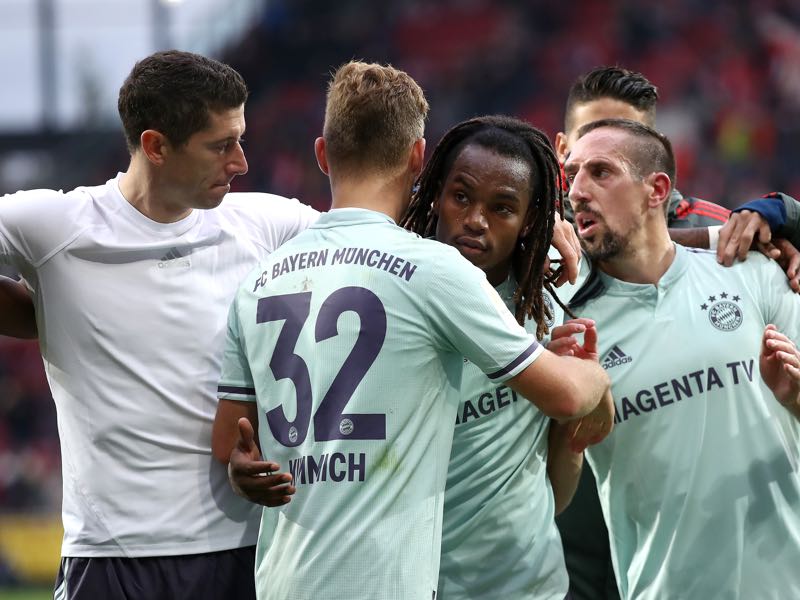 Martin was getting little assistance from Jean-Paul Boëtius and Danny Latza in the first half with Kimmich, Müller and Goretzka having a field day. It’s a double-edged sword, however. Kimmich is so influential in the attack that it is becoming normal for him to play as an extra winger but it leaves his team open against quick counter attacks.

Jean-Paul Boëtius had a tough start to the match as he struggled to keep up with Joshua Kimmich’s movement and pace. Little was going right in the first half but shortly after the break, the 24-year-old equalised with his first goal for Mainz.

Boëtius ghosted into the box and converted Daniel Brosinski’s cross to make it 1-1, revealing after the match that the pair had planned the move at half-time. The left-winger has every chance of becoming a permanent fixture in the side after completing his third consecutive 90-minute match.

Asked about the challenge of stopping Kimmich, he revealed that a half-time tactical switch helped to nullify the threat, saying: “We had our tactics but sometimes the game goes so fast. He is a really offensive back and on the counter-attack your space is open. He came through a couple of times but in the break, we changed some things, in the second half isn’t wasn’t so easy for him to run over me.”

Mainz have high hopes for the former Feyenoord winger who appears to be finding his feet for his new club. Asked how he is feeling after breaking into the first team, he replied: “Hopefully I can continue and show Mainz what I am capable of and be more important for the team.”

Mainz v Bayern München – Where to for Mainz?

The 05ers haven’t won in six Bundesliga games and Boëtius’ strike was just their fifth goal in nine matches. Manager Sandro Schwarz has been attempting to make things happen up front with little success, just one shot on target against Bayern and 0.59 expected goals.

This season Schwarz has tried almost every winger and attacking midfielder in the squad including Gerrit Holtmann, Alexandru Maxim, Robin Quaison, Karim Onisiwo, Jonathan Burkardt, Levin Öztunali, Jean-Paul Boëtius and the departed Pablo de Blasis. The reality is that production from these positions has been negligible at best. 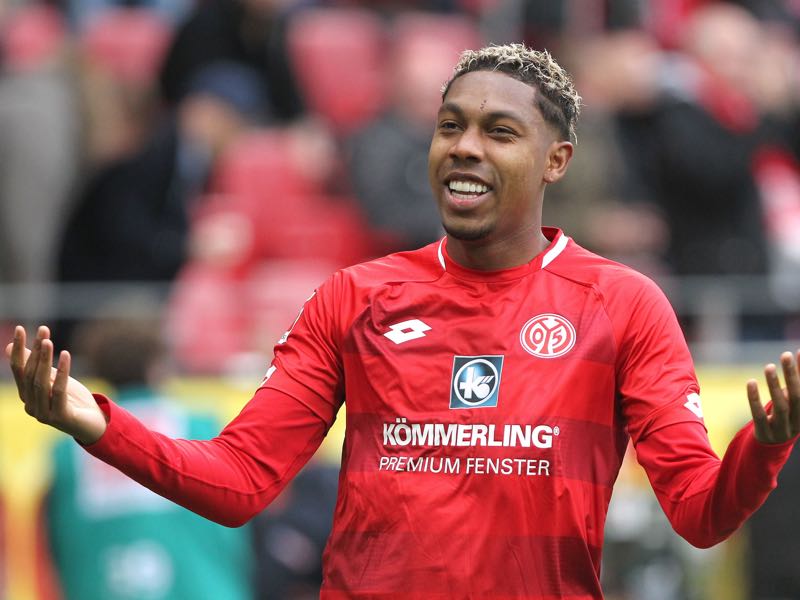 Boëtius’ debut goal is a positive step forward, but Schwarz has to find combinations that can create and score more goals. Jean-Philippe Mateta is trying hard up front but he is starved for chances.

Mainz improved after switching to a 4-2-3-1 midway through the second half and that may be something to persist with. However, they can’t continue to give away cheap possession with such regularity, Daniel Brosinski commenting after the match: “We needed to keep our mistakes to a minimum when playing against opponents with so much quality.”

Thiago thought he had put the visitors into the lead after referee Harm Osmers awarded the goal. Mainz players complained about a foul in the build-up and after consulting VAR and the pitch side monitor the goal was overturned.

Following the decision, supporters of both clubs chanted “Scheiß DFB” which shouldn’t require much translation. The simple fact is, the way VAR is handled is a joke and completely disrespectful to the people at the match.

There is no explanation and no replays inside the stadium. Compare that with the commentary and the multiple replays afforded to the thousands of television viewers the comparison becomes clear. It’s a disgrace and the DFB have to change the policy so the people inside the stadium know exactly what’s going on.