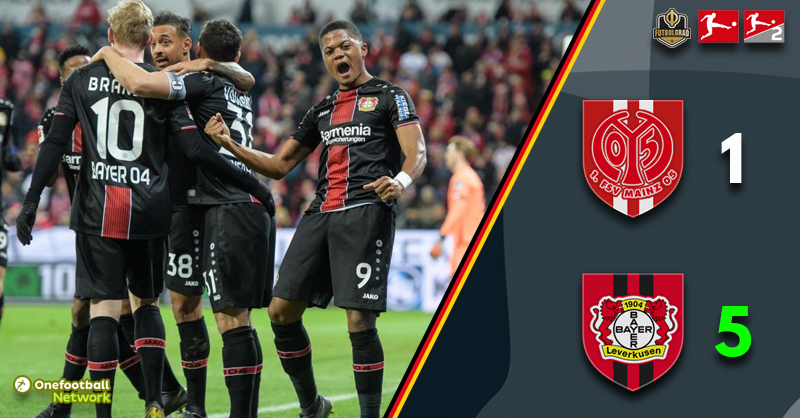 Mainz v Leverkusen was all about the Karneval celebrations in the capital of Rhineland-Palatinate with Mainz even playing in a special Karvenal shirt tonight. Mainz wanted to create a party atmosphere at home against Bayer Leverkusen, but by halftime, they were already convincingly beaten by an all-out attacking Bayer side.

That Karneval celebration almost got off to a quick start. Mainz were making good use of Leverkusen’s high defensive line and broke through in great numbers in the 1′ minute. Robin Quaison played the ball to the right where Aaron had plenty of space and stuck the ball through to Jean-Philippe Mateta, the French striker could not beat goalkeeper Lukas Hradecky. Going the other way Leverkusen opened the scoring.

In the 4′ minute, a long ball found Kevin Volland and the striker made an excellent switch to Karim Bellarabi, whose shot beat Florian Müller, with the ball rolling towards the goal line Wendell made sure the tap the ball across the line. The goal was all Bellarabi, however.

Leverkusen’s lead would not last long. Robin Quaison escaped his defender in the 9′ minute to score after a Mainz corner. It was a promising start, and the two sides kept up the tempo. Leverkusen was only briefly shocked and with Volland 14′ minute, Julian Brandt 16′ minute and Leon Bailey 17′ minute, produced chances to go ahead once again.

Finally, in the 20′ minute, Kai Havertz found the target. A pass from the left found the attacking midfielder with ample space at the edge of the box and the 19-year-old hammered the ball home with a low drive.

And Mainz? Leverkusen’s high press made it difficult for the Karnevalsverein to get back into the match. In the 30′ minute, Volland hit the underside of the bar with Bellarabi failing to send home the rebound.

But it did not matter much because just a few seconds later Julian Brandt broke into the box and scored Leverkusen’s third with a drive to the far corner. It was at times breathless attacking football by the Werkself, which created further chances and also caused some head shakes given that this side lost midweek in the Pokal to second division side Heidenheim.

Just before halftime Mainz finally had their second chance of the game. In the 43′ minute, Quaison worked himself into some space at the edge of the box and hammered the ball on goal, but while he did beat Hradecky, the ball ultimately hit the ball the crossbar. Going straight the other way Bellarabi managed to break into the box and made it 4-1 with a low drive that once again beat Müller at the far post.

Leverkusen’s barrage continued in the second half, and within four minutes Bailey almost had Bayer’s fifth but could not cross a high ball and missed the target. But with Leverkusen up by three the last consequence was missing in their attack, which did not mean that Bayer were done with scoring, it just took some time for the goal to materialise.

Once again Brandt was the scorer as Leverkusen found it easy to pass through Mainz’s defence. In the end, Brandt was left wide open in front of Müller and easily scored in the 65′ minute to make it 5-1.

The goal pretty much put both sides on autopilot. Mainz simply lacked the quality to create something dangerous and Leverkusen and while they sat deep, looking for the occasional counter-attack, die Werkself had taken the foot off the pedal.

It was, therefore, no surprise the game fizzled out with over the last 20 minutes with little to no goal area scenes. The biggest highlight during the later stages of the game were the Mainz fans in the fan block singing and supporting their club on the Karneval weekend despite the result.

Julian Brandt was the man of the match. The winger scored twice and was involved in two more goals becoming the first Bayer player since Stefan Kießling in 2015 to be directly involved in four or more goals. Brandt also completed 84.9% of his passes and completed two of his three dribble attempts successfully in what as a great game by the winger.

Mainz v Leverkusen – Julian Brandt of Leverkusen scores the 1-3 lead against Florian Mueller of Mainz during the Bundesliga match between 1. FSV Mainz 05 and Bayer 04 Leverkusen at the Opel Arena on February 08, 2019 in Mainz, Germany. (Photo by Jörg Schüler/Getty Images)

The hardcore Mainz fans were incredible. On a cold night in which their team was quickly demolished and many of the spectators on the main stands elected to leave early the hardcore supporters sung through the entire match with some fantastic Karneval renditions.