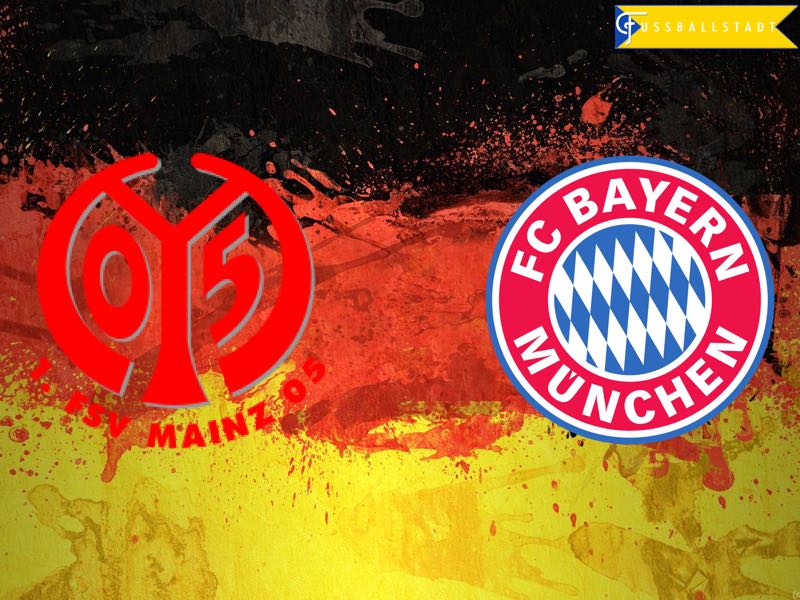 Bayern München overcame a slow start against Mainz to secure three points, and go even on points with RB Leipzig on top of the table.

Rocket man Jhon Córdoba struck for Mainz within the first four minutes of the game on a great counter attack. Following the goal Mainz remained on the forefoot, but it was Bayern, who would strike next when Philipp Lahm deposed Yunus Malli of the ball, and sprung Robert Lewandowski on a counter attack, the Polish striker made no mistake to equalize the score for Bayern. Bayern remained on the attack after equalizing, and in the end it was Arjen Robben, who would finish up a wonderful attacking move with a diving header to overturn the early deficit. Mainz reacted by sitting deep, and hoping to hit Bayern on the counterattack, but neither side could find another goal before halftime.

The second half started were the first half ended with Bayern on the attack, and Mainz sitting deep waiting for opportunities to hit Bayern on the counter. Halfway through the second interval Mainz gave up their rigid defensive formation when Martin Schmidt brought on Levin Öztunali for Alexander Hack, and Danny Latza for Fabian Frei, and the changes started a period in which Mainz pressed for the equalizer, but the goal would not come for Mainz, and instead it was Robert Lewandowski who would put the finishing touches to the game by executing a wonderful free kick from 20 yards out.

Arjen Robben has been in the headlines this week, because of the on-going contract talks between him, and the club. Robben wants to sign a new multi-year contract, whereas Bayern are reluctant to commit long-term. Against Mainz, however, Robben demonstrated that he is still a valuable part of the Bayern squad, as his runs threatened Mainz’s backline on a regular basis. Robben also scored a tantalizing diving header from close range to score the game-winning goal for Bayern.

Mainz, like 1. FC Köln, 1899 Hoffenheim, Borussia Dortmund, and FC Rostov started the match using the 3-5-2 formation, and again Bayern somewhat seemed to struggle with their game. The Bavarians had a difficult time to find solution against a side who would have five in the back when sitting deep, and snap quickly forward with the wing-backs turning into wingers when going forward. Córdoba’s opening goal was exemplary for Bayern’s weakness in the backline this season, which seems to struggle when it comes to their transition game from attack to defence. Mainz could have perhaps gotten a better result had it not been for numerous lapses in their defensive play.