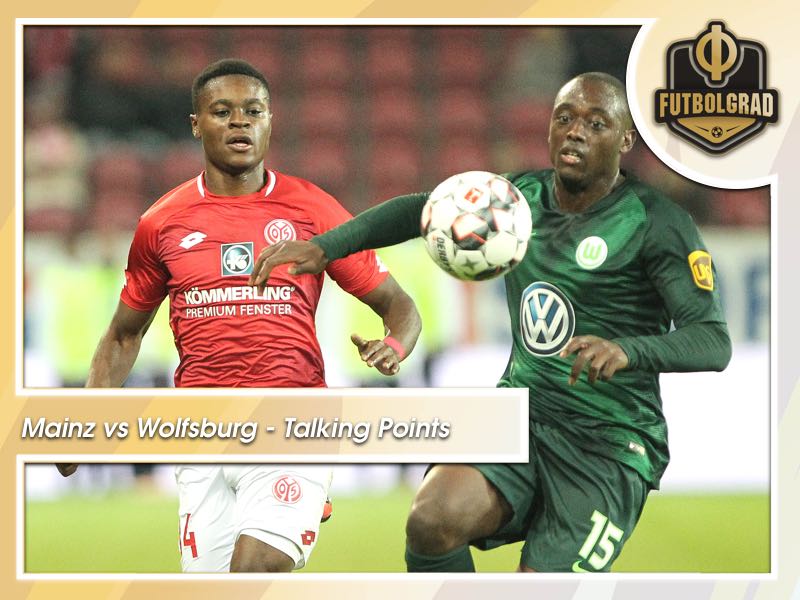 Mainz – Mainz vs Wolfsburg ended in a goalless draw at the Opel Arena in Mainz. The visitors had the better chances, but the result suits both clubs as they move to eight points after five matches.

Josip Brekalo had three good chances in the first half but was denied by Florian Müller and the post. Ridle Baku could have won it with the last kick of the game but his shot smashed the underside of the bar.

Here are four talking points from Mainz vs Wolfsburg:

Josip Brekalo got the start ahead of Renato Steffen and wasted no time making his presence felt. The 20-year-old winger forced a save from Florian Müller early on and then shot over the bar after beating Stefan Bell.

Brekalo beat Müller not long after he but couldn’t beat the woodwork. His best chance was yet to come, driving into the box with a goal looking certain, but Müller saved it with an outstretched leg to keep Mainz in the game.

Brekalo had four attempts in the first half and none in the second, but on another day could have easily won the game for Wolfsburg.

Jean-Philippe Gbamin was heavily involved early in the game, making tackles, clearing corners, beating players and driving forward at every opportunity. It’s what we have come to expect from the powerhouse midfielder.

He was guilty of some sloppy passing in his own half which led to good opportunities for Wolfsburg, fortunately none were taken but it’s an area of his game that needs to improve. Gbamin thought he had scored from long range on the stroke of half-time, only for the referee to rule it out with Bell standing in an offside position. 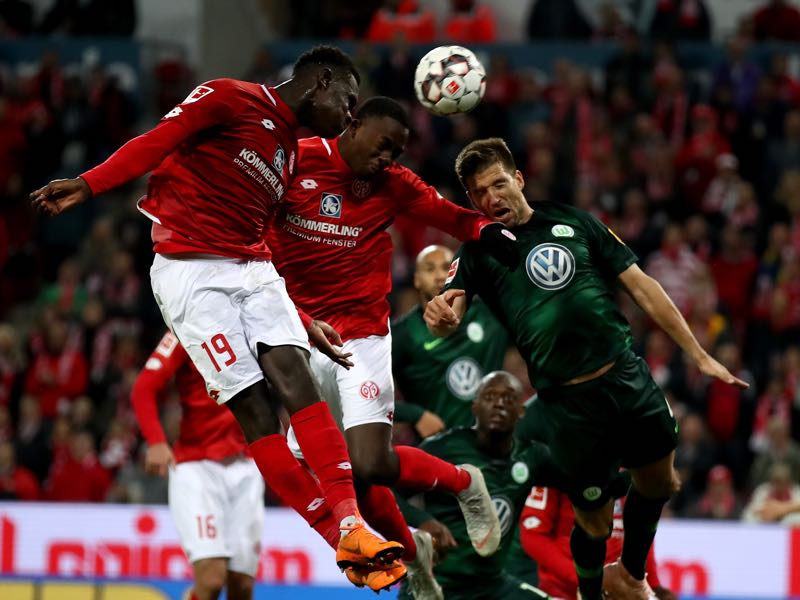 Mainz vs Wolfsburg – Moussa Niakhate #19, Jean Philippe Mateta of Mainz and Ignacio Camacho of Wolfsburg head for the ball during the Bundesliga match between 1. FSV Mainz 05 and VfL Wolfsburg at Opel Arena on September 26, 2018 in Mainz, Germany. (Photo by Alex Grimm/Bongarts/Getty Images)

Overall it was another strong performance from Gbamin who is reportedly being pursued by Premier League clubs. Signed from Lens for just €5 million in July 2016, the 23-year-old is going to be another significant money maker when he eventually moves on.

Florian Müller played five matches at the end of last season and has started every match of the current campaign. This was his second clean sheet and there is little doubt he is Sandro Schwarz’s first choice between the sticks.

Müller displayed his shot stopping ability against Brekalo in the first half and denied good chances from Ignacio Camacho and Daniel Ginczek in the second half. He has confidence on the ball and can distribute with both feet.

Another local junior at Mainz, Müller has taken his chance and moved ahead of René Adler and Robin Zentner in the pecking order. Speaking to the Futbolgrad Network after the match, Müller said he was pleased with the result, feels good, confident and fit and looking forward to the challenge at Schalke.

Mainz vs Wolfsburg – Baku so close

Ridle Baku has become a permanent fixture for Mainz after his incredible Bundesliga debut against Leipzig late last season. The 20-year-old had a wonderful chance to be the hero again when the ball fell to him in the dying seconds.

Final thoughts from the Opel Arena as Mainz and Wolfsburg move to 8 points in the Bundesliga. Talking points up in the morning at @FutbolgradLive pic.twitter.com/ajuACd9ydv

He unleashed a vicious shot that beat Koen Casteels but crashed off the underside of the bar. It was incredibly close to being a spectacular winner, but after the match Baku was still smiling and optimistic.

He told the Futbolgrad network that eight points after five games are good for Mainz’s ambitions. When asked how he feels about his own game, he said: “I have to work and perform in every game, for me it’s a process and every Bundesliga game I try to give my best to develop.”

Baku faces competition in central midfield with Gbamin, Pierre Kunde and Danny Latza all solid options. The youngster still has a lot to learn and improve, but the signs are positive and the crowd favourite is loving every minute of it.