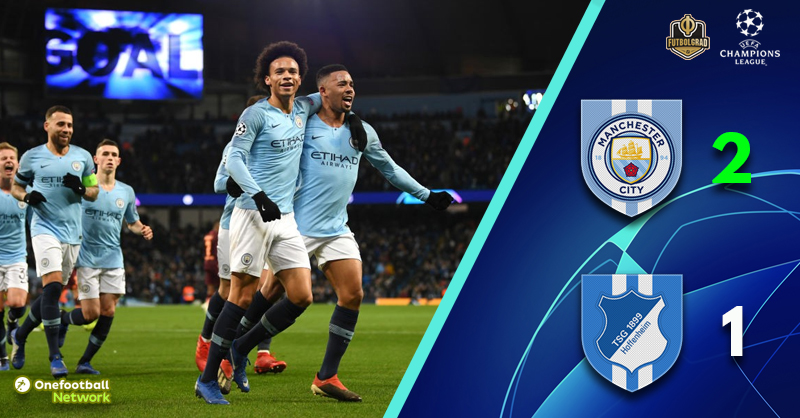 Manchester City vs Hoffenheim would provide the answer to one question. With the hosts already qualified as Group F winners, Hoffenheim needed a victory (and Lyon to beat Shakhtar) in order to make the Europa League come the spring. Could die Kraichgauer complete their mission impossible?

Hoffenheim rolled into the North West of England with one thing on their minds, beat Manchester City and hope Lyon could defeat Shakhtar Donetsk. Not the easiest of tasks, only Lyon and Chelsea had managed that feat so far this season.

Pep Guardiola, with little on offer, chose to heavily rotate his starting eleven, the much talked about Phil Foden was given his Champions League debut. While for Hoffenheim, Joelinton started in attack and looked hungry for goals from the off.

The travelling German support in the far corner of the stadium was loud, propelling the visitors forwards as they controlled the opening minutes of the fixture.

As the clock ticked towards the quarter hour mark, Hoffenheim had their first real chance. Kramarić twisted and turned inside the box and unleashed a fierce shot. Ederson had to be at his best and he was, denying the Croatian with a superb diving save.

From the resulting corner City panicked and Laporte sent Benjamin Hübner tumbling. The referee pointed to the spot and the defender was lucky not to receive a red card – there was no intention to play the ball.

Andrej Kramarić held his nerve from 11 meters and Hoffenheim had the lead their play deserved. It was the 27-year-old’s fifth goal of the season in the Champions League – only Lionel Messi and Robert Lewandowski could claim a higher return.

The goal fired City into life and it wasn’t long before they created their own golden opportunity. Oliver Baumann saved well from John Stones at point blank range, before Nicolás Otamendi then went close – his flick on from İlkay Gündoğan’s free kick crashed against the bar.

Piling on the pressure, the Manchester side eventually found their equaliser and it came via an ex-Schalke player. Up stepped Leroy Sané to take a free kick just outside the Hoffenheim box – from the moment the ball left his foot there was only one outcome. It was a wonderful goal and it came on the stroke of half time.

The late first half goal had buoyed the hosts, they came out for the second 45 minutes full of intent. Attacking at will it became a matter of when, not if, they would find a second.

It was no surprise when City took the lead on 61 minutes, Sané once again with another expertly dispatched finish, after combining with fellow forward, Raheem Sterling – the hosts were now beginning to purr hitting top gear.

So began half an hour of sustained pressure, Guardiola’s men showing why they are one of the favourites to win this competition – however, they couldn’t find the third goal their dominance deserved.

Manchester City vs Hoffenheim – Man of the Match

With two wonderfully well taken goals there could only be one real candidate for the player of the match. The 22-year-old was the scurge of his fellow countrymen all evening.

Devastating from a set piece and clinical inside the box, he showed just why his absence from the World Cup in the summer was the hottest of topics.

Hoffenheim fell out of Europe after some excellent displays in the UEFA Champions League. Unfortunately it was their inability to keep the goals out of their own net that eventually became their downfall.

The Bundesliga side have not been involved in a nil-nil draw since 20 May 2017. In their 22 games this season, in all competitions, there have been 85 goals scored.

It will be an area they will need to address should they qualify for another shot at a European competition next season.