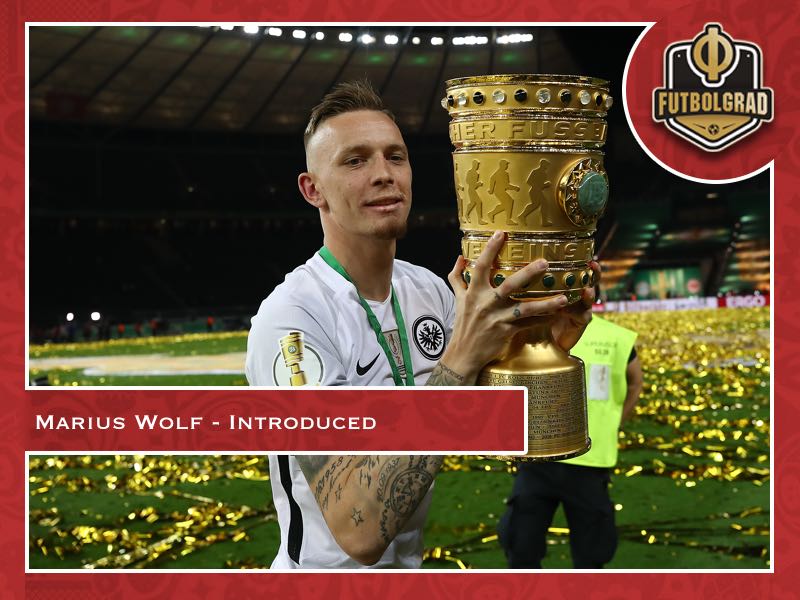 A 23-year-old winger, who can play every position on the right flank and was even used on the left-wing at times this season fits well into Dortmund’s transfer policy. Marius Wolf is a young and versatile player, who was a major step of Eintracht Frankfurt’s DFB Pokal run this season and played 60 minutes in Frankfurt’s cup victory against Bayern.

The DFB Pokal victory capped off a resurrection of a career that seemed to have come to an abrupt halt just 18 months ago. Signed from 1860 München by Hannover 96 in January 2016 Wolf was one of the up-and-coming attacking players in Bundesliga 2.

Marius Wolf was considered a raw diamond at 1860 München. The club had started the 2015/16 season under head coach Torsten Fröhling, who was elevated to the head coaching position in February 2015.

Five years into the era Hasan Ismaik the head coaching position at 1860 München had become a revolving door. Fröhling came in February 2015 replacing Markus von Ahlen, who in turn had replaced Ricardo Moniz in September 2014. Fröhling, in fact, was promoted from 1860 München’s U-23 side, which at the time was playing successfully in the Regionalliga Bayern.

Although a chaotic club 1860 had always benefited from one of the most prolific youth academies in the country and Fröhling heavily relied on several players from the U-23 squad to the first team. Among them was Marius Wolf.

Labelled as an old school street footballer, Marius Wolf was already given plenty of playing time under von Ahlen and Fröhling continued to guide the player, who he coached in the reserve side. In fact, Wolf was considered one of the most talented players in the squad. But although he had a bag full of tricks Wolf also still lacked tactical understanding and at times athleticism.

Hence, although he quickly made his mark on Bundesliga 2, scoring two goals and two assists in 23 games for 1860 during the 2014/15 season, there was always a sense that Wolf could do a bit more with his talent. But with Fröhling he had a strong advocate at this side and Wolf worked hard during the summer of 2015 to improve his tactical play and his athleticism. 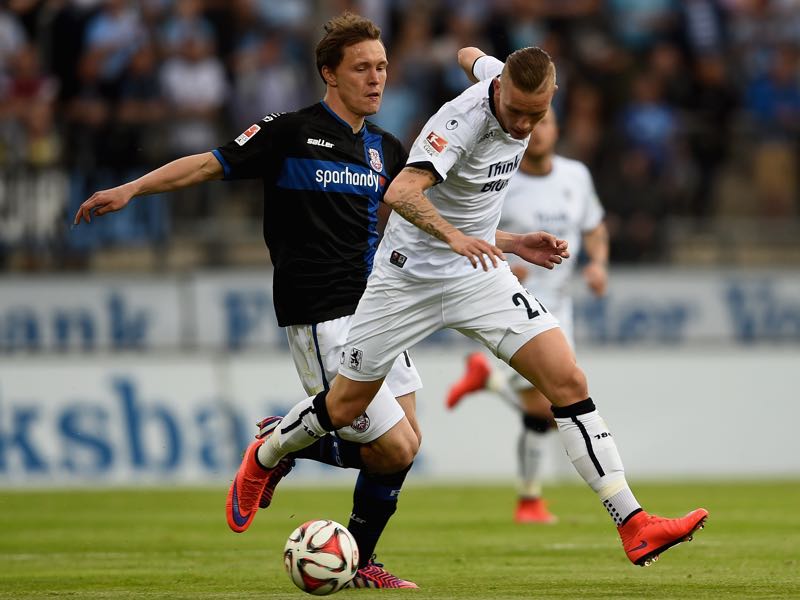 Fröhling would use a combination of a hard hand and fatherly love to develop Marius Wolf. Fröhling’s pre-predecessor Moniz once called Marius Wolf “lazy bastard but a fantastic footballer”. Fröhling on the other hand tried to use a hard hand on the talent, who tried to force a move away from 1860 in the summer of 2015.

The club, however, remained steadfast at first and Marius Wolf would play 16 games in which he scored three goals and two assists in the first half of the 2015/16 Bundesliga 2 season. During that period Wolf was primarily used on the left-flank first by Fröhling, and after another 1860 coaching change, by Benno Möhlmann.

Hannover 96 and the dead end to a promising career

With Marius Wolf, however, wanting to leave the club and 1860 unable to renew his contract die Löwen were finally forced to sell their talent in January 2016 to Hannover 96. It was a move that in retrospect turned out to be a disaster for the street-footballer.

Marius Wolf never fitted Hannover 96 and Die Roten, in turn, did not have the patience to integrate Wolf. Struggling for survival in the Bundesliga the club went through three head coaches – Michael Frontzeck, Thomas Schaaf and Daniel Stendel.

In the maelstrom of relegation none of the coaches had the time to integrate a player of Wolf’s unorthodox abilities. Hence, the attacking midfielder only played three Bundesliga matches and after Hannover was relegated was send to the reserve side to collect playing time in the Regionalliga Nord (nine games, one goal, one assist) at the start of the 2016/17 season. 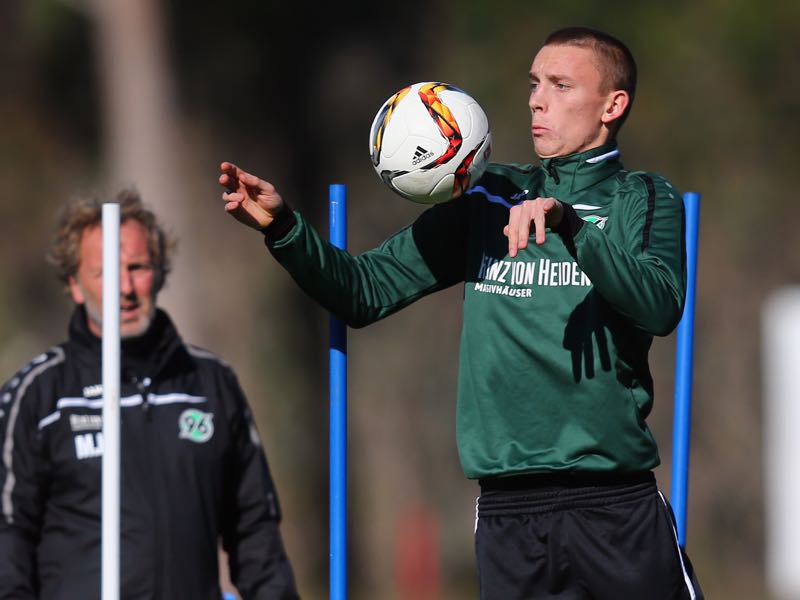 In other words, Wolf’s career was at a dead end. Until Eintracht Frankfurt sporting director Fredi Bobic signed the winger on loan deal for €500,000 in January 2017. In retrospect, the deal was a steal for Frankfurt – the sort of transfer that the current Frankfurt side is built on and has given Bobic an aura of a master squad builder.

Niko Kovac got Marius Wolf back on track

Guided by head coach Niko Kovac Marius Wolf took some time during his first months in Frankfurt playing just three Bundesliga games in the spring of 2017. But then this season he became a massive success.

Frankfurt, in many ways, has become the stomping ground for players looking for a second chance. Furthermore, under Kovac Frankfurt, both played in a disciplined framework but also relied heavily on the genius of streetfootballers like Marco Fabian during the 2016/17 season and then Ante Rebić, Luka Jović, Kevin-Prince Boateng and Marius Wolf during the 2017/18 season.

Signed on a permanent basis by Frankfurt last summer Marius Wolf scored five goals and nine assists in 28 Bundesliga games. The numbers were surprising, because Kovac switched Marius Wolf from the left to the right where the attacking midfielder was more effective – despite the fact that the right-footed forward was robbed of his ability to cut in from the left and finish of attacking moves with his right foot.

In truth, however, Marius Wolf is perhaps the most interesting attacking footballer in German football since the emergence of Marco Reus. Like Reus Wolf has been overlooked earlier in his career and only was able to show his full potential once he was given in the hands of Niko Kovac, who was able to get the best out of a raw attacking diamond. 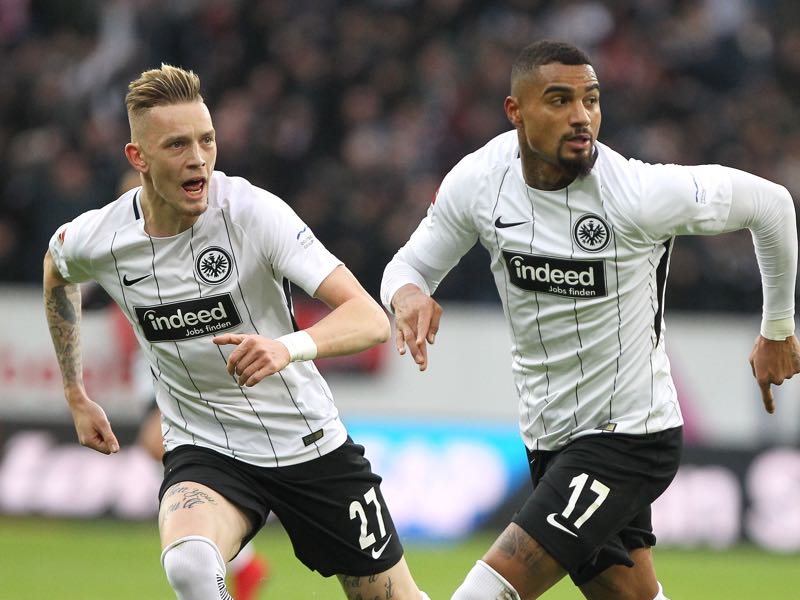 Kevin-Prince Boateng (r.) believes that it will only be a question of time until Marius Wolf (r.) will be called up to the national team Marius Wolf was given little to no chance at Hannover 96 (Photo by Alex Grimm/Bongarts/Getty Images)

Now heading to Borussia Dortmund Marius Wolf will be looking to make the next step under Lucien Favre. The Swiss head coach was once in charge of Marco Reus’ emergence while the two worked together at Borussia Mönchengladbach. Dortmund now hope that Favre can pull a similar trick with the 187cm tall attacking midfielder at Borussia Dortmund.

For Frankfurt, in the meantime, Wolf’s departure was seen both negatively and positively. On the one hand, die Adler will lose a top player but a transfer plus of €4.5 million will help Bobic to perhaps unearth the next gem.

Further south the transfer was greeted with some jubilations as die Löwenwill receive a small percentage of the deal due to FIFA compensation rules. It will be money much needed as die Löwen look to continue their rebuilding process in Liga 3 after completing promotion from the Regionalliga on Sunday.

For Wolf, in the meantime, moving to Borussia Dortmund will be the next step in the career latter, which according to former teammate Kevin-Prince Boateng will have no limits. “I will quit my career if Marius Wolf doesn’t become a national team player,” Boateng told kicker earlier this year. One thing is for certain a move to Dortmund and the possibility of regular Champions League minutes means that Boateng has a good chance of not having to worry about the end of his career any time soone.