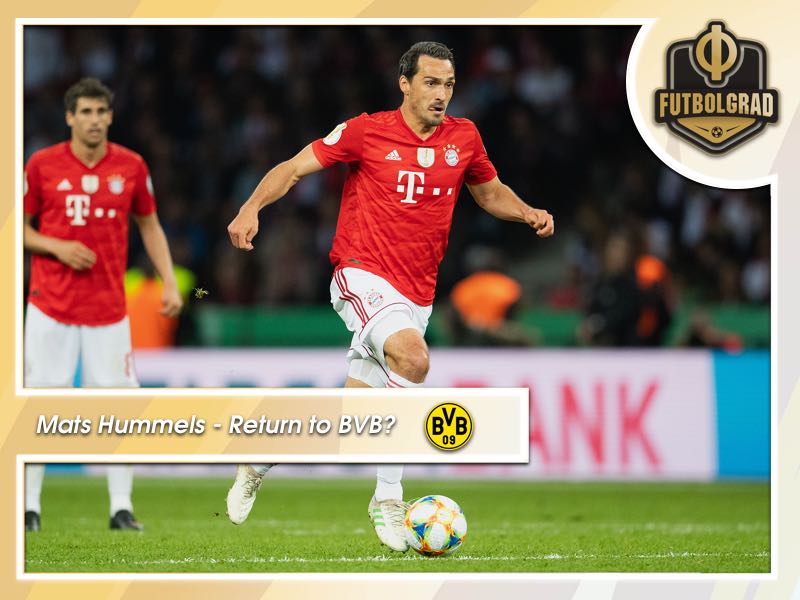 It is only a sensation on the surface; Mats Hummels is on the verge of returning from Borussia Dortmund. Germany’s Bild am Sonntag reported today that Bayern and Dortmund have agreed on a transfer fee in the region of €20 million and that Hummels, in principle, is happy to return to his former club.

The only question mark on Sunday was whether the Bayern defender would be willing to reduce his salary at Bayern, which is in the region of €12 million, to less than €10 million a year. It appears that Mats Hummels is willing to take the reduced salary to leave Bayern.

His motivation is simple. With Benjamin Pavard — for €35 million from VfB Stuttgart — and Lucas Hernández — for €80 million from Atlético Madrid — Bayern have signed two new defenders for the new season. Mats Hummels wants to avoid Jérôme Boateng’s fate of last season — his teammate saw his playing time significantly reduced after his failed transfer to Paris Saint-Germain and now seems somewhat ostracised at the club.

Furthermore, Hummels, just like Boateng, has been very critical of the Bayern bench boss. “We play in a way that makes it difficult to play against teams that press high,” Mats Hummels said after Bayern’s defeat to Liverpool in the Champions League.

“A few adjustments would be helpful,” the 30-year-old said. “I have to somewhat defend the coach, he demands things, but we can’t meet his expectations on the pitch,” he concluded.

Unlike Boateng, however, Mats Hummels has an easy escape option. When Hummels left his former club Borussia Dortmund the transfer back to his hometown, Munich was accompanied by lots of negative noise by the Black and Yellows fan groups. But while the fans were negative towards Hummels’ transfer to their biggest rivals, CEO Hans-Joachim Watzke was more understanding and even left the door open for a potential return of the club’s former captain.

“It was a fair deal,” Watzke said 2017 in the television show Doppelpass. “He wanted to go home. That was decisive,” he added.

Furthermore, Watzke also honoured the defender as the world’s best defender. “When it comes to the combination of charisma, distribution and defence then there is no better,” Watzke said. In general, the CEO always left the door open even if Watzke stated in the spring that a return appears to be unlikely. 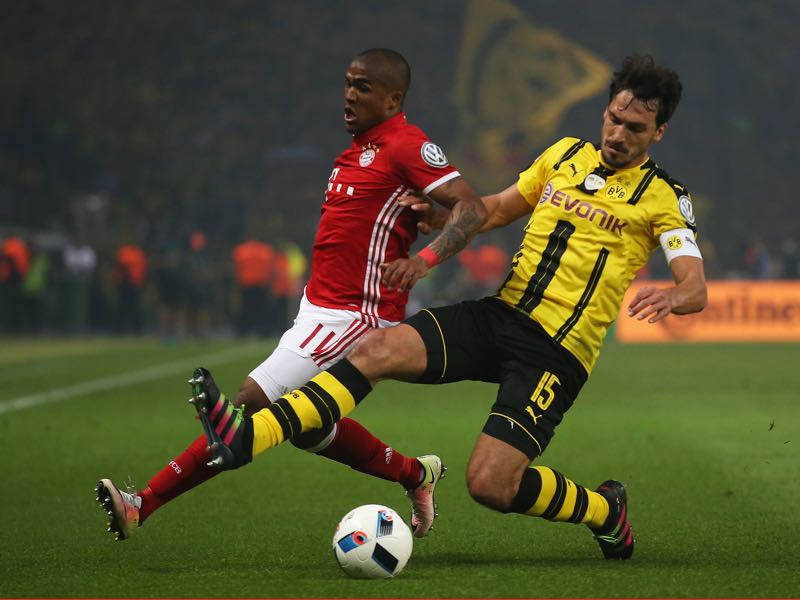 Mats Hummels of Dortmund is challenged by Douglas Costa of Bayern during the DFB Cup Final between Bayern Muenchen and Borussia Dortmund at Olympiastadion on May 21, 2016 in Berlin, Germany. (Photo by Lars Baron/Bongarts/Getty Images)

You should, however, never say never in football. Because as it stands the probability of Hummels returning to Dortmund in the coming days are extremely likely.

In fact, it is the sort of transfer Borussia Dortmund need to challenge Bayern München for the title. The Black and Yellows have already made three key signings this summer adding Thorgan Hazard, Julian Brandt and Nico Schulz. While all three add speed and depth, only Schulz is a defender but playing for Julian Nagelsmann at Hoffenheim acted as an attacking wide-back rather than left-back.

Dortmund’s defence, in fact, will have to shoulder a large part of the blame for BVB missing out on the title last season. Overall, Dortmund conceded 44 goals in 34 games, 12 more than eventual champions Bayern. Furthermore, defenders Manuel Akanji and Abdou Diallo, in particular, struggled with fitness all season.

Meanwhile, new signing Leonardo Belardi needs to demonstrate first that he is capable of becoming a Bundesliga star. The 20-year-old is a promise for a brighter future but in the short-term is more likely to take up Ömer Toprak’s squad position rather than replacing either Akanji or Diallo, who could also be used out wide in the starting XI.

Hence, for Dortmund signing an experienced defender like Mats Hummels makes sense. The 30-year-old already knows the environment, and after some work with the fans could be integrated quite easily.

Mats Hummels – By the numbers

Furthermore, going by the numbers, Hummels would be a magnificent addition to the Dortmund lineup. When it comes to successful defensive actions per 90 minutes last season, the 30-year-old ranks second in Dortmund’s squad with 7.86 only to Dan-Axel Zagadou (8.15). A number that has to be taken with a grain of salt given that Hummels played all key games for Bayern and that the number does not take into account individual mistakes that led to goals — an area Zagadou struggled in last season.

According to Wyscout of all Dortmund players in the squad, only Zagadou (38.28%) ranks higher than Mats Hummels when it comes to defensive duels won. Hummels won 33.84% of his defensive duels more than a regular starter and midfielder Thomas Delaney (33.46%) and by far more than defenders Diallo (27.09%) and Akanji (25.87%).

Meanwhile, in terms of aerial duels, Hummels ranks third among current Dortmund players. Only Toprak (72.97%) and Zagadou (64.08%) won more aerial duels last season than Hummels (62.95%). Once again this is a category where Hummels did better than Dortmund’s first choice starters Diallo and Akanji.

When comparing the three defenders, in fact, Diallo appears to be the odd one out of the three. Akanji, identified to be a potential Hummels 2.0 is in many regards similar to the 30-year-old former German national team defender. In fact, Hummels and Akanji could form a brilliant partnership in which Akanji could benefit from Hummels’ experience.

Diallo, in the meantime, could be used out wide, or also, fit in as a third centre-back should Dortmund head coach Lucien Favre opt to go with three in the back. That option, in particular, becomes a fascinating proposition following the addition of Schulz.

But what about Bayern München? The record champions, and Niko Kovac, in fact, may have to ask themselves the uncomfortable question on whether they are not making a mistake when it comes to letting both Hummels and potentially Boateng go this summer.

As part of the Lucas Hernández scout report, we took a closer look at his and Pavard’s numbers and how they compared to Hummels and Boateng. Back in March, we found that both defenders were more dominant in many key aspects of their defensive game than Bayern’s new signings.

Those numbers will not have changed much. After all, Pavard struggled with Stuttgart and was relegated at the end of the season. Meanwhile, Hernández missed the entire second half of the season with a significant injury.

Hence, where Bayern seem to gamble on a better future, Dortmund are investing in a trusted defender. In the end, however, the results on the pitch will be decisive as football, as it is often pointed out in our Gegenpressing Podcast, is not played on paper.