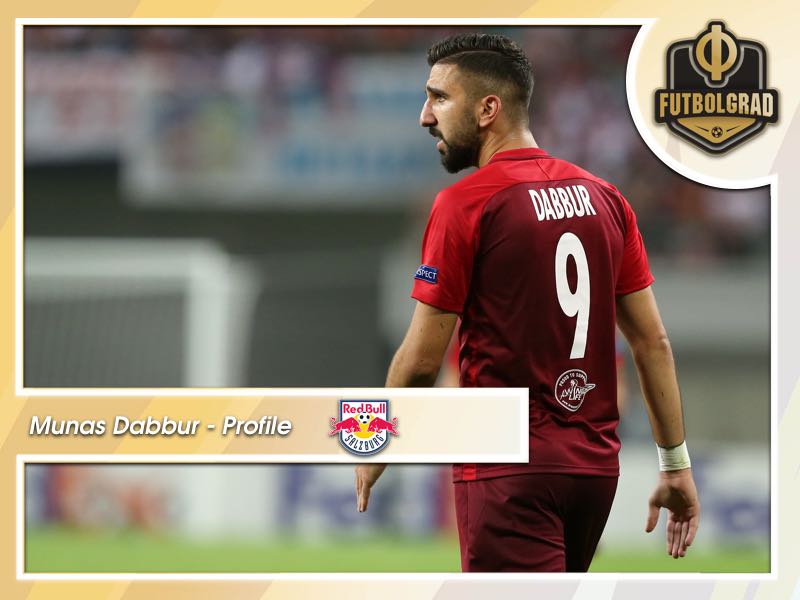 Munas Dabbur – The Boy From Nazareth Is Coming Of Age

Munas Dabbur is the latest Red Bull Salzburg prospect that has caught international attention. Already linked with the likes of Liverpool and various other clubs around the continent the Israeli forward has become an interesting commodity ever since Salzburg reached the semifinals of the Europa League last season.

That Europa League performance, in particular, was an important moment in the history of RB Salzburg or FC Salzburg as they are known in European competitions – although the club that was formerly known as Austria Salzburg was the first club to be taken over Red Bull in 2005. Since RB Leipzig’s promotion to the Bundesliga, however, the project in Germany has become somewhat of a priority for Red Bull.

As a result, many of the best players based in Salzburg in recent years were transferred. The likes of Naby Keïta, Dayot Upamecano, Konrad Laimer and Marcel Sabitzer all played for RB Salzburg before being moved to the sister club in Germany. This winter Amadou Haidara was the latest player to make the trek north and even Munas Dabbur at times has been linked with a move to Leipzig as a potential replacement for Timo Werner.

Losing players to Leipzig and elsewhere in many ways is the ethos of RB Salzburg. When Red Bull first took over the club Salzburg, located picturesquely in the Alps just across the Bavarian border became the home of many German Bundesliga stars looking for a last paycheck. But under current RB Leipzig sporting director/interims head coach Ralf Rangnick there was a significant philosophy change that transformed Salzburg into a development club for the best talent from all over the world.

Part feeder club, part independent entity trying to make money Salzburg have been able to walk a fine line of developing players and remaining competitive. This season is a good example. Salzburg have dominated both the Austrian Bundesliga this season but also have won six out of six in the Europa League including two games against their “parent club” RB Leipzig.

Munas Dabbur with his six goals and one assist in six Europa League games was a big reason for Salzburg’s march through the Europa League group stage. But before we get into too many statistical details, we want to take a look at the player.

After all, Dabbur is not a typical player. It is not often that Israeli players manage to make a name for themselves in the shark tank that is European football. Even less common is the impact of Israeli players that have Dabbur’s background.

Born in Nazareth Munas Dabbur is an Israeli citizen and Israeli national team player but he is not Jewish. In fact, as Uri Levy and Yossi Medina from Babagol have explained to the Futbolgrad Network, the striker is an Arab-Israeli, a Palestinian playing for Israel. In some ways, it reflects some of the common misconceptions about Israel in general.

The national team, in particular, has always been one that was made up of players of many different backgrounds. One example is Bibras Natkho. The former CSKA Moscow midfielder, and now a star for Olympiacos, has played 49 games for Israel but is a so-called Circassian-Israeli a Muslim tribe, who have their origin in the Caucasus.

Dabbur’s background is equally interesting. “Basically Munas is from Nazareth a city, which is very famous for its Christian heritage. Yet he is a Muslim a very devoted Muslim, and there is a large Muslim community in that city,” Levy explains.

“I saw him while he played in Maccabi Ahi Nazareth u-19 team. He wasn’t the superstar of the team, actually, he was a bit problematic. He had good technique but was lack of mental strength, so he made too many fouls and used to talk a lot with referees,” Yossi Medina tells the Futbolgrad Network. “Since childhood, he was always considered the next big thing, which made him seem a bit arrogant,” Levy added.

Of course, perception can be misleading as Levy explains. “His father died when he was young. His mother is everything for him as is his grandfather, which makes him very in touch with his family. Very protective towards his family and identity as an Israeli-Arab as an Israeli-Palestinian as a Palestinian, who lives in Israel but you know he truly represents Israel from a very young age. He played throughout the young teams of the national team and now is the biggest star in the Israeli national team,” Levy explains.

But it was not always that simple for Munas Dabbur. His arrogance on the pitch and many fouls meant that he often clashed with referees as Medina can attest from his own experience. “Good for him, Maccabi Tel Aviv recognised his potential. Their youth team is more organised and focus more on making their players to real athletes. He became stronger physically, his technique improved and he was concentrated on what he needs to do – scoring goals,” Medina told the Futbolgrad Network.

“And that’s why he succeeded back then in Maccabi Tel Aviv. He had a strong manager like Jordi Cruyff, and his coaches were Oscar Garcia and Paulo Sousa. He always knew that he can’t do something wrong because someone else will take his place and he might miss his chance,” Medina concluded. 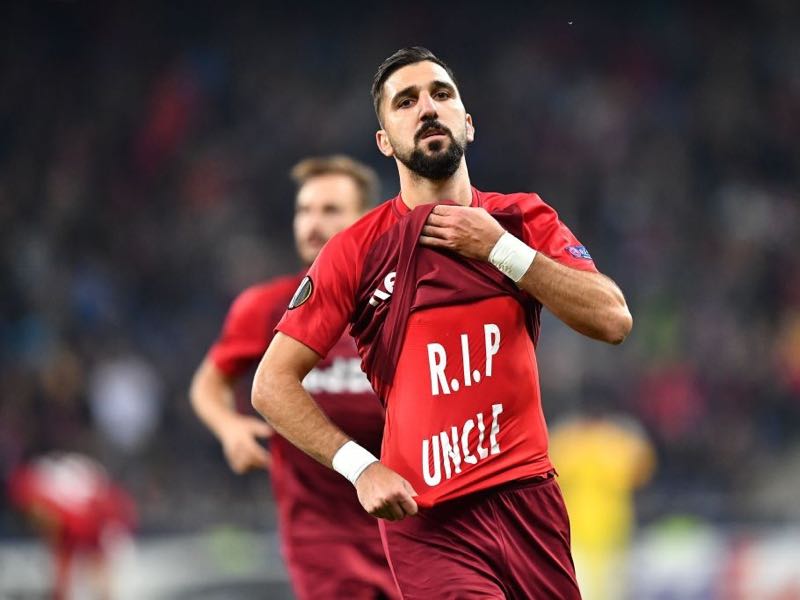 Munas Dabbur of FC Salzburg shows a message on his shirt as he celebrates scoring the 1-1 goal during the UEFA Europe League Group B football match Salzburg v Celtic in Salzburg, Austria on October 4, 2018. (Photo by JOE KLAMAR / AFP)

Strong managers, in particular, seems to be an ongoing theme in Dabbur’s career. The now 26-year-old forward played for Maccabi Tel Aviv between 2011 and 2014 before making the jump to the Grasshoppers in Zürich. The Swiss league is among the best in Europe when it comes to identifying young talented players in non-traditional football markets. In his first season in Switzerland, Munas Dabbur scored 13 goals and eight assists in 32 Swiss Super League games. He added another 19 goals and 13 assists in the 2015/16 season enough to convince the Red Bull scouts that he was good enough for their system.

But once at RB Salzburg things were not that simple. With Jonatan Soriano, Takumi Minamino and Hwang Hee-chan Salzburg had reliable scorers up front. Then there was head coach Óscar García, who had coached Munas Dabbur at Maccabi but did not seem to be able to integrate Dabbur at Salzburg.

Thankfully for everyone involved García was gone at the end of the season replaced by Marco Rose. The German has since turned Red Bull Salzburg into one of the most attractive teams to watch in Europe, and Munas Dabbur was a major part of that change.

What sort of player is Munas Dabbur?

It would be simple to narrow down Munas Dabbur to the goals he has scored for RB Salzburg. Since rejoining the club in the summer of 2017 Munas Dabbur has managed to score 49 goals and 17 assists in 85 games. But it is one thing to score goals against the likes of Mattersburg, Wolfsberger AC, SCR Altach or FC Admira Wacker Mödling and another to consistently score on the highest European level.

Munas Dabbur has managed both. Last season he managed to score 22 goals and five assists in 32 Austrian Bundesliga games and added another five goals and three assists in Salzburg’s run to the semi-final of the Europa League. Among the teams, he scored against in Europe were Olympique Marseille Real Sociedad and Lazio.

It is a similar story this year. The 26-year-old forward has managed to score nine goals and four assists in the Austrian Bundesliga and also managed six goals in six Europa League group stage matches. Furthermore, Munas Dabbur was not to blame for Salzburg to once again miss out on the group stage of the UEFA Champions League as the Israeli scored four goals in four qualification matches – including two in Salzburg’s fateful 2-2 draw to Crvena zvezda in the second leg of the playoffs.

Missing out on Champions League football was ultimately the biggest disappointment of the season and could ultimately be one of the motivators for Munas Dabbur to leave the club this season. Not that it showed in the Europa League, however, as Dabbur scored against RB Leipzig on matchday 1, then scored twice against Celtic on matchday 2 and Rosenborg on matchday 3 before scoring his final goal of the group stage campaign against Celtic on matchday 6. On average Munas Dabbur has managed to score every 85 minutes in the Europa League this season against top class opponents. 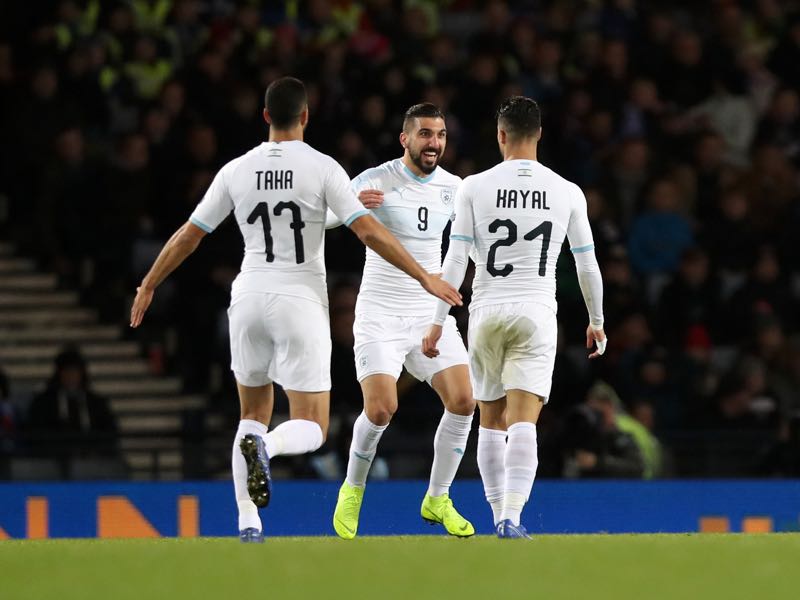 Beram Kayal of Israel celebrates with team mates Loai Taha and Munas Dabbur after scoring his team’s first goal during the UEFA Nations League C group one match between Scotland and Israel at Hampden Park on November 20, 2018 in Glasgow, United Kingdom. (Photo by Ian MacNicol/Getty Images)

That, in turn, suggests that he would be more than capable of making the jump to a bigger European league. But what also stands out is Dabbur’s ability to operate from deep in space that does not limit him to merely a goalscorer.

The Israeli’s two major hunting grounds is the penalty box – a natural space for any striker – but also the space between the halfway line and the penalty box. Here Dabbur likes to pick up the ball just of the centre to the left and make his way into the box as part of Salzburg’s fast-paced attacking football that sees Red Bull players swarm forward whenever they win the ball in numbers.

Munas Dabbur has the ability to both go into dribblings, of which he won 63.2% of his on average 5.36 dribbles this season, but also make recoveries in the opposite half (3.06 on average per 90 minutes). On average Munas Dabbur has managed to complete 51.9% of his 70.98 actions per game this season.

In the Europa League, the 26-year-old leads all players in scoring with six goals and one assist ahead of teammate Fredrik Gulbrandsen. Regarding goalscoring, Munas Dabbur has scored one more goal then Eintracht Frankfurt’s goalscoring sensation Luka Jović. Perhaps not surprising given that Munas Dabbur leads the competition with shots on goals with 24 – a stat that suggests that the striker gets in the right spaces but perhaps needs to work on his efficiency to score even more, especially as he manages to get 50% of his shot on target, which is the fourth best rate in the competition.

Overall, Munas Dabbur is a fascinating prospect with an even more fascinating background. Given his goalscoring prowess, it will only be a matter of time until he ends up in one of Europe’s top leagues – either by the route of a transfer or simple delegation to Salzburg’s sister club in Leipzig.