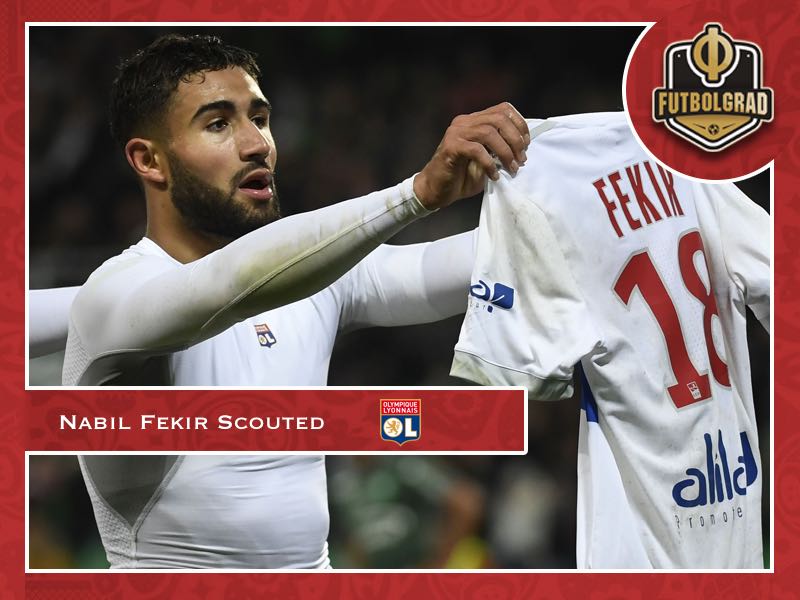 Of Algerian descent, Fekir has recently been linked with moves to Liverpool and Chelsea. Speaking to SFR Sport, Liverpool’s Sadio Mané said:“Nabil is a very exciting player. He could do beautiful things here, and he will enjoy his time with us. We always need players like him, and if he joins us, it will be fire.”

The statement was recorded following reports from France that Lyon and Liverpool had agreed on a €70 million deal for the French attacking midfielder. Those reports were then quickly denied by both Lyon and Liverpool.

According to the Liverpool Echo, however, Liverpool are adamant that’s not the case, and Lyon president Jean-Michel Aulas says there has been no approach for Fekir. Speaking after Lyon’s 3-0 victory over Troyes on Sunday, Aulas said: “No. If we had negotiated and signed (a deal), I would be the first to know.

Fekir, in the meantime, has been coy about his future. “I heard these rumours,” he said. “For now, I am in Lyon. There are still two games left, and we are preparing for them in the best way possible.”

Liverpool are of course not the only club interested in the 24-year-old. Reports on May 7, suggested that Chelsea are now in the driver’s seat to sign the attacking player. The closing of the silly season, however, means that those rumours come and go and that Chelsea and Liverpool could be joined by the likes of Bayern München.

Where he will end up is therefore still very much up in the air. But what we do know is that Fekir has a gentlemen’s agreement with Olympique Lyon’s president Jean-Michel Aulas, which will allow him to leave the club should a club be willing to spend between €60 million to €70 million for the 24-year-old, who is under contract until 2020.

Given the current market, it would be a great deal for an attacking midfielder, who has been exciting in the French Ligue 1. In 28 Ligue 1 games, he has scored 17 goals and six assists. Fekir has scored every 131 minutes this season, and other vital statistics include 85% pass completion as well as 3.1 dribbles a game.

Starting his career as a winger, Fekir has somewhat re-invented himself in the last couple seasons. As his pass completion rate shows, he has moved to the centre of the pitch where he acts at times like a playmaker but also as a shadow striker.

It was, however, not until this season that Fekir’s numbers started to take a significant uptake. Last year Fekir scored just nine goals and four assists in 32 games. What changed was that Lyon signed Mariano Díaz from Real Madrid. The 24-year-old Dominican striker has formed a fantastic partnership with Fekir.

The Mariano and Fekir partnership is key

Mariano creates the space and room in which Fekir finds the area to break into when playing behind the very front line. As a result, Fekir could be described as a striker, but in reality, he is more of a false number-nine someone, who operates in concert with a striker.

It would, therefore, be wrong to describe Fekir as a classical winger and clubs looking to play him in that position might want to look elsewhere. Furthermore, Fekir operates best in a flexible attacking system with a physically strong partner on his side.

Nabil Fekir has been in sensational form this season. (PHILIPPE DESMAZES/AFP/Getty Images)

That sort of tactical flexibility would, of course, predestine him for the likes of Liverpool where manager Jürgen Klopp has been playing without a clear number nine the entire season. But at the same time, the Reds have a similar player in Roberto Firmino.

At the same time, numbers do not lie. Fekir has been sensational this season and at 24 still has room to grow his game and to adjust to a different competition. Whether that will be a big club in England or elsewhere is the only thing that remains to be seen at this point.