The 23-year-old Benfica Lisbon right back Nélson Semedo has recently been named as one of the possible replacements for Bayern München’s Philipp Lahm. The 33-year-old German has announced that he will retire from professional football at the end of the season.

Bayern have already been linked to Bayer Leverkusen’s right-back Benjamin Henrichs earlier this week. But, as expected, a club of Bayern’s magnitude will be looking at several potential players to replace Lahm in the summer.

Despite facing Dortmund’s key player, Semedo managed to break forward on several occasions during the opening moments of the match. Nélson Semedo was, in fact, able to explore the space created behind Reus—this was a result of Dortmund playing with a back three.

After a strong start, however, Nélson Semedo then became more involved in the defensive game. What was apparent right away was that he combined strength well with speed. At times he was even able to outpace Marco Reus.

At the same time, Nélson Semedo struggled when Marco Reus tracked from the wing to the centre. On those occasions, Dortmund turned their 3-4-3 formation to a 3-5-2 with Reus almost playing like a second striker, and with Ousmane Dembélé moving behind Pierre-Emerick Aubameyang. This meant that Nélson Semedo was almost left hanging on the wing.

In the second half of the first interval, Borussia Dortmund began to take control of the match and, as a result, Nélson Semedo became somewhat marginalized to his defensive duty.

Thomas Tuchel then reacted and brought on André Schürrle for Aubameyang. With Schürrle on, Nélson Semedo faced a new struggle with both Reus and Schürrle, interchanging positions out wide. But Nélson Semedo kept it basic, and was a major part of keeping the two players off the score sheet, and was therefore an important part of Benfica traveling to Dortmund with a 1-0 advantage.

Fast and athletic, Nélson Semedo can support the forward line with his quick runs down the right side. The right back is very good at breaking forward by using his pace, against teams who give Benfica room. He is also fantastic on breakaways. At times, he was able to shut down Marco Reus on the wing by using his speed to outrun Marco Reus. He is excellent in supporting the right midfielder immediately placed ahead of him. He is solid in his defensive abilities.

He seems isolated against teams that dominate Benfica. Against Dortmund, for example, he failed to break forward after die Schwarzgelben took control of the match. Nélson Semedo also struggled to put a stamp on the match. One of Philipp Lahm’s biggest strengths is the fact that the right back can take control of a match. Nélson Semedo still lacks that ability. Furthermore, his mistimed challenges meant that Dortmund’s right midfielder Marcel Schmelzer was given space to support Dortmund’s forward line.

There is no doubt that Semedo has an excellent future ahead of him. The 23-year-old right back will most certainly leave Benfica in the immediate future to join a club from a major European league.

But whether Nélson Semedo has what it takes to join one of Europe’s elite clubs right away remains to be seen. Bayern München have recently seen with the likes of Renato Sanches that the transition from Portugal’s Liga NOS to the Bundesliga can be a gigantic step for young up and coming players. At the same time, Nélson Semedo has an exit clause of €60 million, and is expected to cost at least €40 million in the summer. 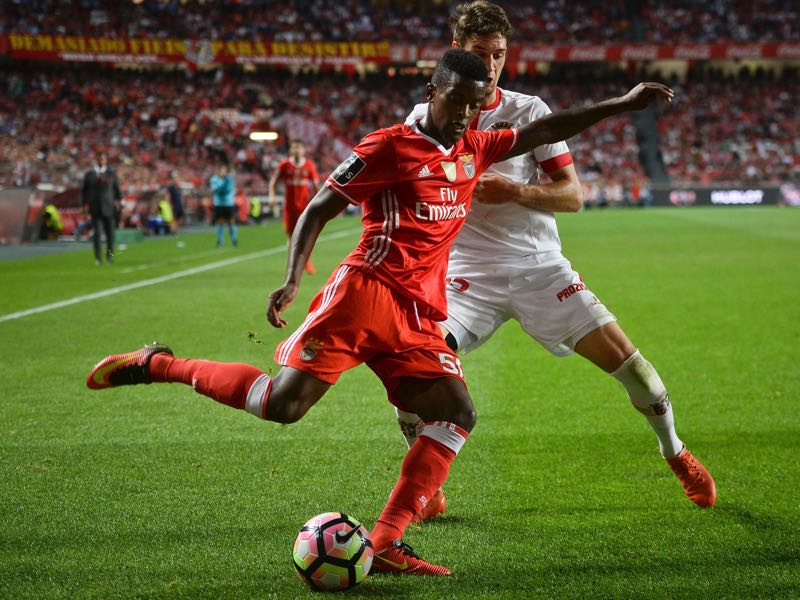 Nélson Semedo has plenty of upside, but €40 million might be a bit overvalued. (PATRICIA DE MELO MOREIRA/AFP/Getty Images)

Very few clubs, Bayern certainly among them, can afford that kind of money for a young Portuguese player. The Germans are certainly expected to make a major splash in the summer transfer window. But given the fact that Bayern are also interested in Benjamin Henrichs, who is not only younger, but also a German national team player, and has also shown that he can perform on the Bundesliga level. Furthermore, Henrichs would only cost a fraction of the potential €40 million that Nélson Semedo will command.

It is, therefore, more likely that Bayern will pursue a player from their domestic league, rather than spend big money on a player who has not shown yet that he can perform at the highest level on a weekly basis. That does not mean, however, that Nélson Semedo will remain in Portugal, as big clubs in England, and Italy could swoop in for him.