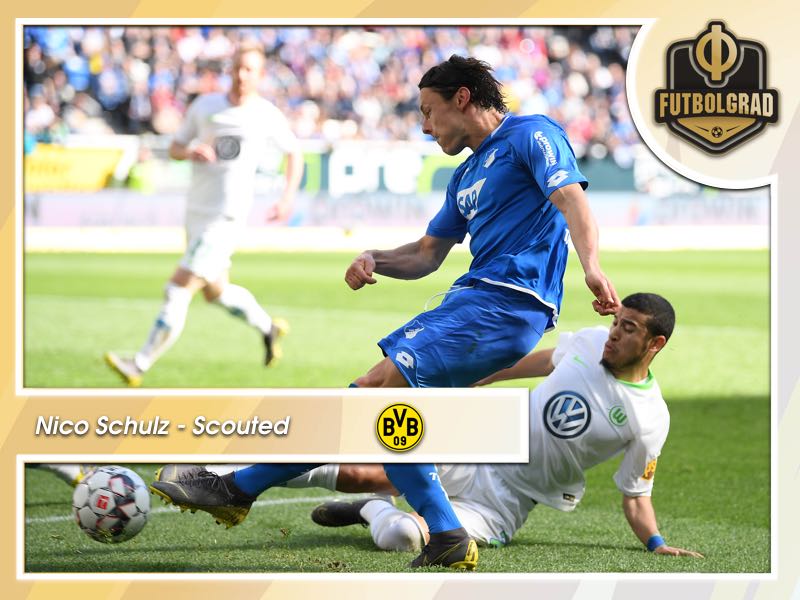 Borussia Dortmund have officially announced their first high calibre signing of the season. In a transfer worth in the region of €25 million national team left-back, Nico Schulz will join Borussia Dortmund from Hoffenheim this summer.

“Nico Schulz is a defender who made a significant step forward in his development,” Borussia Dortmund sporting director Michael Zorc said.

It has been a transfer that has been an open secret for some time in Germany, and it is a deal that comes with some consequence. After all, the left-back position has been a problem for Borussia Dortmund most of the season with Marcel Schmelzer struggling with injuries and lack of form for most of the season.

As a result, head coach Lucien Favre had been forced to employ centre-backs Abdou Diallo, Manuel Akanji and even Dan-Axel Zagadou on the left side of the back four. Neither player, however, was truly able to provide a long-term international class solution. Furthermore, Raphaël Guerreiro can play the position, but Favre seems to prefer him further up the field.

Hence, signing Nico Schulz from Hoffenheim is a logical step by the decision makers in Dortmund. The left-back has been an emerging talent in Germany ever since he burst on the scene for Hertha Berlin in 2012. Then in 2015, he joined Borussia Mönchengladbach, but a complicated injury meant that the left-back never fulfilled his full potential in Gladbach.

In the summer of 2017, Schulz joined Gladbach’s league competitor Hoffenheim in a move that would truly kick start his career. Under Hoffenheim head coach Julian Nagelsmann Nico Schulz developed into one of Germany’s best left-backs/wing-backs and in 71 games for the Kraichgauer scored four goals and 13 assists.

Playing in Nagelsmann adaptable 3-5-2/3-3-2-2 system Schulz successfully walked the fine line between having to play as a left-back and a full-back. In fact, playing that system in Hoffenheim meant that Schulz soon became a key component in Bundestrainer Joachim Löw’s rebuild following a disastrous 2018 World Cup campaign. 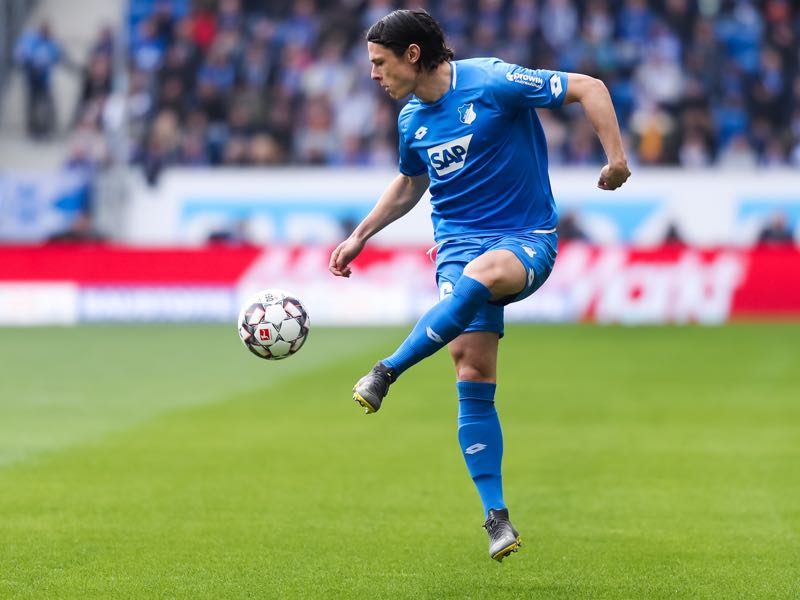 Nico Schulz of Hoffenheim controls the ball during the Bundesliga match between TSG 1899 Hoffenheim and Hertha BSC at PreZero-Arena on April 14, 2019 in Sinsheim, Germany. (Photo by Simon Hofmann/Bongarts/Getty Images)

The 26-year-old made his national team debut in September and scored the game-winner in Germany’s 2-1 victory over Peru. Five more appearances followed as Löw slowly transformed the national team away from 4-2-3-1 possession football towards a more counter-pressing style with a 3-5-2 formation.

It has been a difficult transition that ended in Germany’s UEFA Nations League relegation. But in March Nico Schulz was the hero when Germany beat the Netherlands to open up the Euro 2020 qualification campaign. Up 2-0 after the first half, Oranje equalised in the second, but just before the end of the game, Marco Reus would assist his future teammate in securing a vital victory for Die Mannschaft.

That game, in particular, put Nico Schulz on the radar. Versatile, fast, solid in defence and schooled by Julian Nagelsmann, Nico Schulz is a rare commodity in German football.

“Just like the national team, we will benefit from his physical attributes, his tempo and his dynamic play,” Zorc said. “A player with his greed and fighting spirit is good for any team,” Zorc added.

“Borussia Dortmund are a top club that fit my style of play,” Nico Schulz said. “I think my style of play can help the team. We can achieve great things together,” he added.

Nico Schulz  by the numbers

But what exactly is Schulz’s style? Looking at his advanced stats, he is a less defensive player than Dortmund’s current full-backs. Lukasz Piszczek leads Dortmund in successful defensive actions this season (9.11 per 90 minutes). He is followed by Marcel Schmelzer (8.57), Abdou Diallo (7.01), Marius Wolf (5.7) and Manuel Akanji (5.59). In that category, Nico Schulz ranks last among current Dortmund players with 5.13 successful defensive actions per 90 minutes this season.

Those numbers, however, come with a caveat. Schulz’s position in Hoffenheim’s 3-5-2 formation is more offensive minded than what full-backs have to play in Lucien Favre’s 4-2-3-1 formation.

That is underlined by Schulz’s successful attacking actions throughout the 2018/19 season. The 26-year-old managed 6.5 successful attacking actions per 90 minutes for Hoffenheim this season. That would rank him third among current Dortmund players behind Christian Pulisic (10.35) and Jadon Sancho (9.08) — fourth if one includes potential new signing Thorgan Hazard (7.41).

Those numbers highlight that Nico Schulz is a balance payer. He is as much an attacking threat as a defensive player thanks to Nagelsmann’s tactical setup in Hoffenheim. That begs the question, however, will Schulz’s arrival lead to a tactical switch in Dortmund?

After all, Schulz’s attributes might be best accentuated in a 3-5-2 setup similar to how Hoffenheim, Eintracht Frankfurt and now also Germany play. With Hazard and Julian Brandt also on their way, such a tactical switch might be not out of the realm of possibility, especially as Favre, who was often limited by his squad tactically last year, now has more tactical flexibility thanks to the new arrivals.