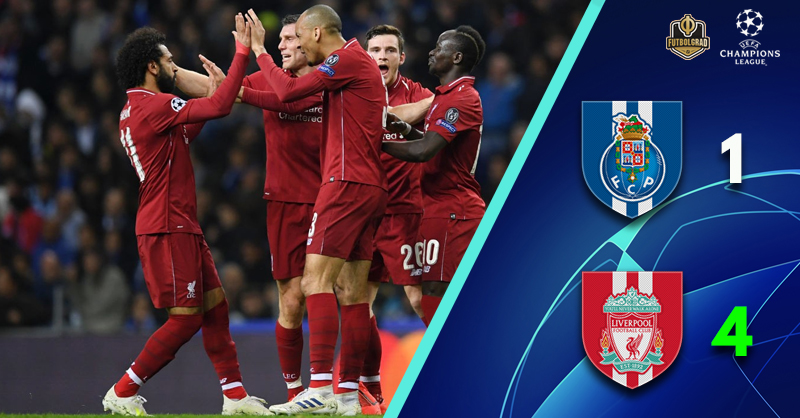 Liverpool show their class in Portugal once again

Jürgen Klopp spoke of the need for his Liverpool side to be at “100 per cent” for their Champions League quarter-final second leg at Porto – the Reds were put under tremendous pressure from the referee’s first whistle, but VAR had a deciding factor in the evening’s events before Liverpool eventually romped to victory.

Porto believed from the start that anything was possible if their players didn’t, the fans certainly did. The noise inside the Estádio do Dragão lifted the Portuguese underdogs an inch higher as they searched in earnest for an early goal.

They almost found one – Jesús Manuel Corona drove a shot that had Liverpool’s Alisson at full stretch, the game was barely 40 seconds old.

What followed was a relentless wave of attacking football from the hosts, Moussa Marega should have done a lot better with his header on 13 minutes. It was the attacker’s fourth clear cut opportunity of the tie so far – after failing to take the three chances afforded to him at Anfield last week the Malian will have been disappointed yet another went begging.

As the half-hour mark approached Liverpool had been under immense pressure, the hosts registering seven shots and pinning the Merseyside club into their own half. The Reds were looking for a break in play, to slow the tie down at any given opportunity.

Sadio Mane thought he’d broken the deadlock on 26 minutes, poking home a Mohamed Salah lofted cross – the assistant on the near side raised his flag – offside. But, as the Champions League has become accustomed to, there was a pause in proceedings for a VAR check.

It was a protracted break. Offside is absolute – you’re either on or off, there should be no need for a 92-second delay on a relatively easy call. However, the news was good for Klopp’s side when it eventually came – GOAL. The Reds had the lead, and it was very much against the run of play.

After their smash and grab, Liverpool then went about frustrating their hosts – not just on the pitch but also in the stands. Every break, throw-in and goal kick was met with a crescendo of whistles and jeers.  It wasn’t a perfect half for Klopp to look back on during the break but it had given Liverpool one foot into the semi-final.

Roberto Firmino – a surprising omission from the starting XI – came on during the break, replacing a rather ineffective Divock Origi. It looked like Klopp was happy soaking up the Porto pressure, but wanting a little more on the counter when chances presented themselves.

Porto’s rapid first half start wasn’t replicated as the second period got underway, opting for a more measured build up – Sérgio Conceição’s side looked for quality over quantity, but it was that final crucial aspect that deserted them.

This approach by the hosts played to Liverpool’s strengths and the Reds began to find more space to attack and with more time to build.

It was then, only natural, that with the game opening up both sides would find a chance of real quality that could lead to a goal. And so, we had two goals in as many minutes. First, Salah broke at speed and finished well. It looked to be game over, but Eder Militao rose to head home a well-delivered cross by Alex Telles.

Just as Porto sensed something special might happen, Jordan Henderson picked out Roberto Firmino – it was Liverpool’s third and the game was over as a competitive fixture on the 77th minute.

The Reds even had time for one more, James Milner’s corner nodded home with ease by Virgil van Dijk. Barcelona beckons for Liverpool, and there will be no fear from Klopp’s men.

Porto vs Liverpool – Man of the Match – Mohamed Salah

With an assist and a goal, the Egyptian showed just why he is feared across Europe. Salah’s goal in the 3-1 win at Southampton on 5 April was his first for almost eight weeks, but since then the forward has slipped back into old habits.

Picking out Mane with ease for the opener, he then left the Porto backline as bystanders – finishing well, similar to that seen on England’s south coast just over 10 days ago.

Liverpool rode a number of early scares to once again see out a Champions League knock out fixture, tonight’s game in the Estádio do Dragão will have served as a mini warmup for the Reds’ next challenge – an away date at the Camp Nou.

The final quality missing from Porto’s play will be on full display – as Manchester United found out this week to their cost, but Liverpool remain a danger, especially on the counter and the semi-final should be two very special fixtures.