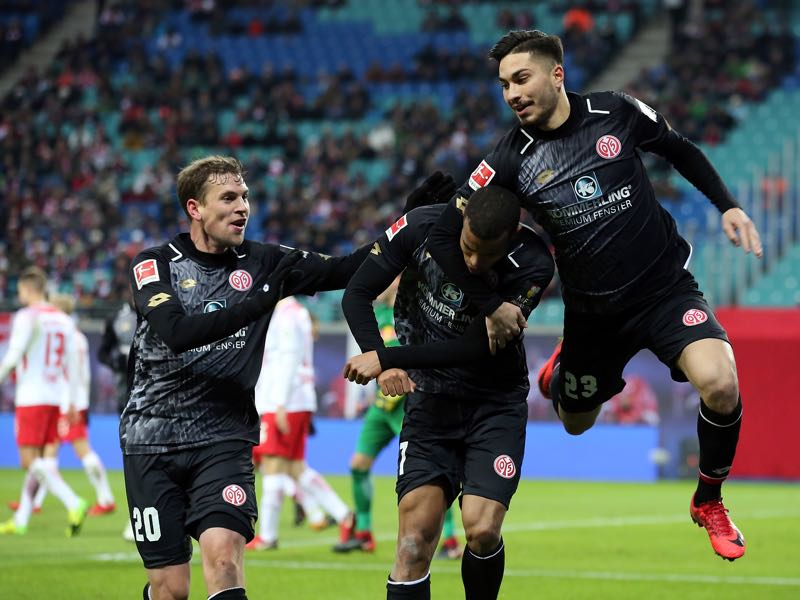 RB Leipzig v Mainz ends with a fair draw. RB Leipzig dominated the game at times but was too inconsequential in the final 15 minutes allowing Mainz to get back into the match.

Following RB Leipzig’s 2-1 defeat to Besiktas, Ralph Hasenhüttl opted to rotate his squad and included fan favourite Dominik Kaiser in the squad. Perhaps it was the rotated squad, but Leipzig looked to struggle a bit with their rhythm, and Peter Gulasci almost gave away an early goal when dangled the ball inside the box and lost the ball to Mainz forward Gerrit Holtmann, who was unable to convert the chance. Then in the 5′, Robin Quaison escaped defender Willi Orban and ran into the box where Gulasci stopped his shot from a tight angle. It took Leipzig to the 12′ minute to finally produce their first real attempt on goal. Konrad Laimer won the ball deep in Mainz’s half and sent Yussuf Poulsen on a run and the Danish striker, under pressure by a defender, managed to get a shot of that just about missed Robin Zentner’s goal. At this point Leipzig started to take control of the match slowly, and in the 19′ minute Timo Werner received a ball on the right wing, using his speed the forward broke into the box, but under pressure was forced to take a shot from a tight angle, which was then spilt by Zentner, but Kampl was out of position and was unable to capitalise.

Werner was then also the architect of the next chance in the 28′. Starting the play with a one-two outside the box the striker managed to get a shot off inside the Mainz penalty box, and Zentner had to do well to get down and stop the shot. Just one minute later Leipzig was in front. Laimer played the ball to Poulsen on edge to of the box the Dane then played the ball with his heel to Diego Demme spotted Kampl in the box, who made then managed to beat Zentner with a curled effort into the far corner of the goal. What followed next was another episode in the DFL’s ongoing VAR slapstick comedy. Holtmann fell after a duel with Ilsanker, and the game at first continued until referee Patrick Ittrich got a call from Köln where the VAR referees are located. After studying the pictures—replays shown to the press were not conclusive on whether or not it was a foul—Ittrich gave a free kick just outside the box. Curled on goal by Daniel Brosinski Gulasci came up with a fantastic stop, unfortunately for the Hungarian keeper, however, Quaison was ready for the rebound and equalised for Mainz. In the 44′ Leipzig almost responded with their very own free kick chance, but a curled effort by Dominik Kaiser’s curled shot from 19-yards skimmed the crossbar. Just before halftime referee Ittrich once again required the aid of VAR after Werner and Poulsen were brought down inside the box and after double checking the pictures stuck to his decision to give the penalty. Werner stepped up and made it 2-1 for Leipzig.

With the lead in their back, Leipzig started the second half with the first chance. Bernardo received the ball 25-yards away from the goal, but he managed to unleash a powerful shot, which was awkwardly handled by Zentner, who used both fists to clear the ball. Leipzig controlled the match and only occasionally was Mainz able to break free. One such moment came in the 59′ with Quaison and Donati combining well. The latter then got a shot off from just inside the box, but Gulasci did well diving low to catch the shot. Quaison was then also the protagonist of Mainz’s next chance in the 62′ when he managed to escape his defender and tanked his way through to the six-yard box, but his low drive to the centre of the box was stopped by Gulasci.

In the 73′ Ittrich was once again at the centre of things. This time the referee had heard enough from Mainz coach Sandro Schwarz, who continue to lament decisions made by the refereeing team and as a reward was sent to the stands. At this point, Leipzig were in control, but although die Roten Bullen, unlike Mainz, still had their coach on the sidelines it appeared that Leipzig were without direction at times. Too often would Leipzig players opt for an extra pass or trick rather than seeking the direct path to Mainz’s goal? It was Leipzig’s inconsequential play that kept the Karnevalsverein from Mainz in the match up to this point, and as it is often the case in football if you do not kill of the match opposition will make the most out of it. Hence, in the 86′ Mainz equalised through an Emil Berggreen header following a corner kick. The goal woke Leipzig up, who tried everything to get back up front in the match, but Werner had a penalty denied in the 88′, and Kampl’s long-range effort was well stopped by Zentner.

Highlighted as our player to watch in our preview Kevin Kampl was true to our word by being the man of the match. Playing in a far more offensive role than it was the case last season for Bayer Leverkusen Kampl played on the left-wing in Ralph Hasenhüttl’s 4-2-2-2 system. In his role as an attacking winger, Kampl orchestrated several attacking plays and also scored an excellent opening goal with a curled finished. 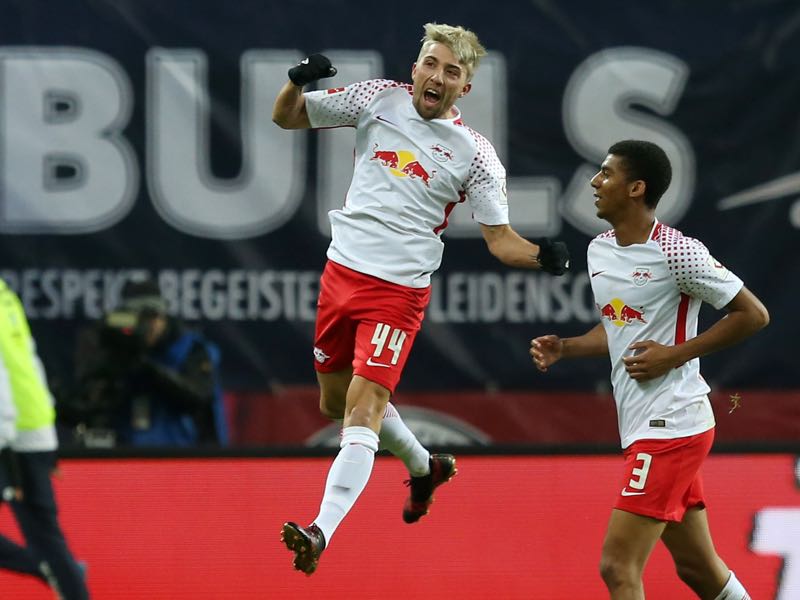 Kevin Kampl (l.) was the player of the game. (Photo by Matthias Kern/Bongarts/Getty Images)

VAR was once again the main talking point. Brought in ahead of this season as an aid for referees it becomes more and more apparent that referees have become too reliant on the system. Rather than trusting their instinct, DFB referees opt to often to hand the decision over to the VAR operation room in Köln. Furthermore, it is not always apparent what constitutes game-changing decisions, which is after all one of four criteria used to take VAR into account. The Mainz free kick that led to Mainz’s first goal, for example, does not necessarily fall under a game-changing decision as it was not a case of the referee missing a penalty decision. Strictly, speaking the VAR should have determined that Mainz’s player was not fouled inside the box and therefore that no penalty was supposed to be awarded, games, however, are not supposed to be whistled back for free kick situation. A clear misconception of the rule by the DFB team in Köln and a decision that cost Leipzig potentially two points tonight. VAR was also a talking point during the press conference and neither head coach could clearly explain when referees should use the system and when not. Hasenhüttl lamented that Ittrich did not use the rule the right way: “I don’t understand why he didn’t use it in extra time on the foul against Werner. Also instead of giving a free kick before the first Mainz goal the decision has to be technically a throw in for us as it was not a game changing decision.”

Sandro Schwarz: “It was an emotional game. We had a good chance at the very beginning. We were sitting deep and we managed well until Leipzig scored. We reacted well and equalised. But then just before the end, Leipzig were awarded a good penalty. We reacted well in the second half and although Leipzig pushed we were able to push against their attacking play and managed a point.” 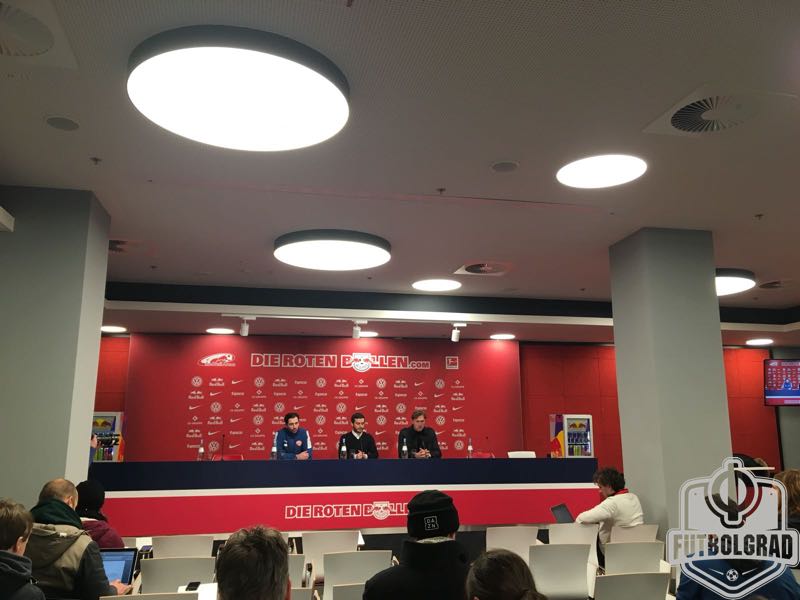 Ralph Hasenhüttl: “We had a difficult start, which wasn’t a surprise given the game on Wednesday. After 15 minutes we were the better team. The first goal was consequential the second goal was the result of a great play. During halftime, we had to substitute twice, because we had a couple players on the verge of a red card. We should have scored the third goal, but the players were getting tired and then what happened is almost typical for football. Standard situations have been an issue we will work on that. Then we should have been given another penalty, I don’t understand why the referee didn’t take a look at the situation.”