Listen back to all the action on our Gegenpressing Bundesliga Podcast.

The Futbolgrad Network is at the Red Bull Arena in Leipzig to bring you coverage from the Bundesliga match Leipzig vs Bayern. Follow the action on our Liveblog below:

Bayern have turned the match around. The game showed that you should never count out the Rekordmeister! Leipzig looked like the sure winner, and Timo Werner the player of the match, but in the end Bayern were able to turn the game around winning the match in unbelievable fashion. Dortmund’s 1-1 draw in Augsburg means that Leipzig will finish the season in second place.

Willkommen Europa.. @ChampionsLeague for @RBLeipzig_EN next season. What an amazing season for the promoted club. Europe will fear them pic.twitter.com/Es8v0ODche

Unbelievable Arjen Robben wins it for Bayern München! The Dutchman receives the ball in his own half, and storms past several Leipzig defenders to beat Gulasci with a lop inside the six yard box.

Bayern want to win the match now, and press for the winning goal.

Robert Lewandowski is brought down outside the box. The replay, however, shows Lewandowski embellished the play. David Alaba, however, has no issues with the play, and converts the free kick.

Bayern are pressing now. The Bavarians really want the equalizer can Leipzig hang on?

Robben wins Bayern a freekick with his classic flying Dutchman routine. The resulting free kick is played short, and Robben gets into a good goalscoring position and hits the crossbar, but Lewandowski is able to head the rebound in. The Polish striker now has 30 goals for the second season in a row.

Timo Werner is being replaced by Rani Khedira. Werner has been the player of the match and receives a standing ovation.

RB Leipzig vs Bayern – Timo Werner was easily the player of the match. (ROBERT MICHAEL/AFP/Getty Images)

Bayern with a spell of dominance here. The Bavarians, however, cannot find a way through.

Thomas Müller makes it 4-3. The goal is, however, waved off for offside, but Vidal, and not Müller was offside.

Thiago is shown a second yellow card, but remains on the pitch…? Looks like Stieler may have overlooked Thiago’s first booking.

Great atmosphere here at the Red Bull Arena with the fans singing songs about the club reaching the Champions League.

Timo Werner with a great goal to increase Leipzig’s lead. The striker breaks through on the left side, and then nutmegs Tom Starke to make it 4-2. 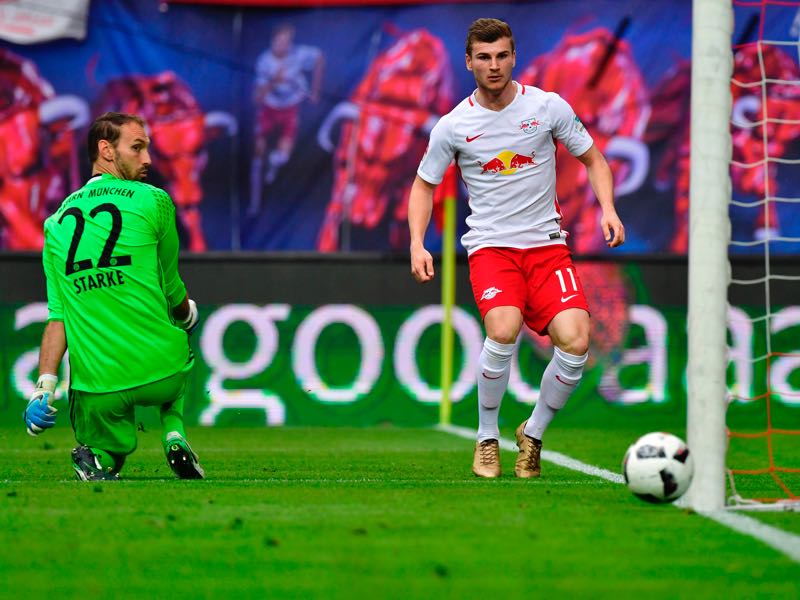 RB Leipzig vs Bayern München – The moment that should have sealed the deal…. (JOHN MACDOUGALL/AFP/Getty Images)

Game is becoming real nasty now. Arturo Vidal takes out Demme in midfield, and Thiago then picks up a fight with Keïta. Referee Stieler shows both Bayern players a yellow card.

Thiago finishes a great combination in the penalty box with a close-range header. Can Bayern come back?

Xabi Alonso on the edge of a red card here. The Bayern midfielder fouls Forsberg in midfield and receives a stern talking by referee Stieler, whose hand signal is clear “one more foul, and you are off.”

Leipzig are really clever here. Die Roten Bullen give Bayern plenty of space to control the ball, but at the same time are always dangerous moving forward.

Some scores from the other matches. Hoffenheim are dismantling Bremen the score there 0-5 for Hoffenheim, who are now on track to pass Dortmund in the race for third place.

Robert Lewandowski almost with Bayern’s second goal. The Polish striker breaks through on the right side, but his shot is just wide of the target.

The smoke from Bayern’s silly fan protest has now drifted across the entire stadium making it difficult to see.

Timo Werner finds Forsberg in the box, who then drops the ball off to Yussuf Poulson, and his shot is deflected past Starke to make it 3-1 for Leipzig.

Bayern fans release a smoke bomb at the start of the second half. It appears it is part of an anti-RB Leipzig fan protest.

One minute is added. Seems very little given how long Ribery was treated.

Long break in play here. Frank Ribery seems to have picked up an injury, and is being replaced by Douglas Costa.

Frank Ribery, in particular, is having a tough time. The Frenchman is consistently on the receiving end of rough play by the likes of Stefan Ilsanker, Naby Keïta, and Diego Demme.

Speaking of Werner by the way. The young star continues to shine and is a real option for Joachim Löw. Read more down HERE! 👇

Leipzig are now back on top, and they are trying to build their lead. Starke has to do well to stop a close range Poulson header.

Penalty for Leipzig! Xabi Alonso fouls Emil Forsberg in the box. The Spaniard is lucky that the referee Tobias Stieler does not send him off for what looked like a professional foul. Timo Werner steps up and converts the penalty for his 20th goal of the season.

Emil Forsberg with a curled effort from outside the box that just misses the target.

Bayern have a chance, but Peter Gulacsi stops his low drive from inside the six-yard box. The score remains RB Leipzig vs Bayern 1-1.

Bernardo almost surprises Tom Starke with a wonderful bicycle kick from outside the six-yard box. The Bayern keeper has to do well to keep out the shot.

Game has settled a bit now. Leipzig continues their tactic of hanging back hoping for a quick counter attack.

Robert Lewandowski steps up, and easily converts the penalty. He is now at 29 goals this season. Read more about the goalscoring race right HERE 👉

Lahm crosses the ball into the box and Bernardo handles the ball. Tough call. Loud whistles in the stadium now.

Robben is Bayern’s man of the match thus far. The Dutchman is able to create space on his right side time, and time again, but his colleagues have offered little assistance.

Bayern establish themselves at Leipzig’s box, but can’t find a way through. Leipzig then quickly collect the ball and move forward in numbers. Werner breaks through on the left side again, but his shot hits the far post. Could be 2-0 for Leipzig at this point.

Leipzig have slowed down a bit. Bayern, on the other hand, are now attempting to control the match, but have problems to deal with Leipzig’s pressing machine.

Leipzig are on fire. Again it is Werner, who has plenty of space on the left side, his cross, however, does not find a player in the centre. Yussuf Poulson then collects the ball outside the box, but his finish misses the target.

Leipzig keep coming! Again it is Werner, who finds space on the left side, but this time Sabitzer misses the target.

RB Leipzig counter right after Bayern’s chance, and Timo Werner finds Marcel Sabitzer in the box, who is able to head the ball past Tom Starke into the net.

Bayern start the match. The fans are singing Europapokal. Bayern, however, have the first real chance of the game right after kickoff after Arjen Robben finds Frank Ribery in the box.

Good atmosphere here in Leipzig. RasenBallsport are hosting Bayern München for the first time in history. Both clubs have a week of rest behind them. Both clubs have given their players time off during the week to celebrate their respective club’s achievements. It will, therefore, be interesting to see how serious the clubs will take the game.

Here are the lineups for RB Leipzig vs Bayern: