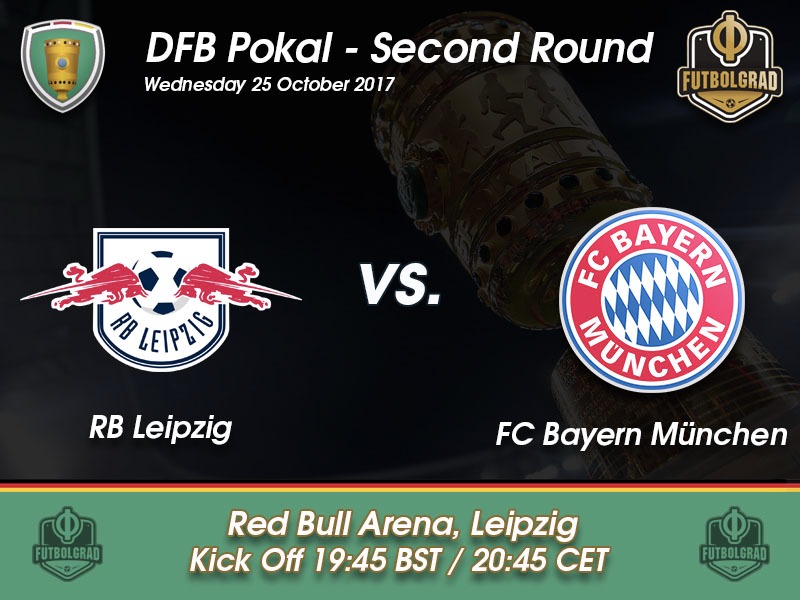 Drawn together in the second round of the DFB Pokal RB Leipzig vs Bayern München could have been easily one of the potential final matchups for this competition. In fact, this second round matchup will see the Bundesliga’s second place team Bayern meet the Bundesliga’s third-placed team in Leipzig. That in itself would be enough drama, but the two sides are going to meet next Saturday again.

Furthermore, for both sides, the two games will determine how the rest of the season will go. Having to come to terms with playing in the weekend midweek rhythm Leipzig have recovered from what was a somewhat shaky start to both the Bundesliga and the Champions League. Die Roten Bullen recorded a famous win against Borussia Dortmund two weeks ago and then beat Porto 3-2 in what was their first ever victory in the Champions League. They then defeated newly promoted VfB Stuttgart 1-0 in what was not an easy match given the emotional return of Timo Werner, who is a product of the Stuttgart academy.

Now on Wednesday, they are facing the club that very much serves as the benchmark of the Red Bull project in Leipzig. Although the officials are somewhat cautious about the project, the amount of money indicates that Red Bull are serious in building a super club in Leipzig. It was for that reason that sporting director Ralf Rangnick refused to sell any of the top stars this summer and why the club once again targeted several European top talents to strengthen the squad.

Hence, with nine games played in the Bundesliga, it is no surprise that Leipzig are once again among the top teams in Germany. At the same time, however, Leipzig have failed twice to beat Bayern last season—a heavy 3-0 defeat was followed up with a wild game in Leipzig on matchday 33, which ended with a 4-5 victory for Bayern. Externally Leipzig told the media that they did not expect to take on Bayern yet, internally, however, beating Bayern is the big goal and the club feel that they can now achieve it.

As for Bayern the games against Leipzig and the duel against Dortmund in two weeks will be the big test for Jupp Heynckes. The new head coach has come in and steadied the ship with victories over Freiburg, Celtic and Hamburg. But none of the three wins could be considered a major surprise or a benchmark for the rest of the season. Hence, the two games against Leipzig, as well as the games against Dortmund and Paris Saint-Germain, will set the tone for the remainder of the season for the Rekordmeister.

Hence, with everything on the line for both sides, this will be an open game not unlike the game that took place between the two teams in May. Both sides are relatively even at the moment, which could see this game go into extra-time where Bayern’s experience may just edge it.

RB Leipzig vs Bayern München – Players to Watch Out For

Ahead of the doubleheader between Leipzig and Bayern München Naby Keïta has been primarily in the spotlight. The 22-year-old Guinean had a sensational first Bundesliga season with RB Leipzig and as a result became the transfer target of several European top clubs including Bayern München and Liverpool. With RB Leipzig unwilling to sell the playmaker last summer Liverpool managed to secure Keïta for next summer paying a premium on top of the exit clause, which meant the English Premier League club was able to outbid the Bavarian giants, who were already offered Keïta while he was still playing for Red Bull Salzburg in Austria. Ultimately Bayern did not want to take the risk of paying a premium for a player, who could get hurt while still playing at Leipzig and stepped away from the transfer opening the door for Liverpool to sign Keïta next summer. Keïta therefore not only wants to show Bayern what they may have missed out on, but he also wants to prove that he does not go absent in big games like it was the case against Bayern last season and in the Champions League and Dortmund this season.

Naby Keïta will under the spotlight when RB Leipzig host Bayern this Wednesday. (ROBERT MICHAEL/AFP/Getty Images)

The injury to Thomas Müller will open the door for James Rodríguez to show the Bayern officials that they were not wrong in granting Carlo Ancelotti’s wish to sign the Colombian playmaker. Brought in as an alternative to Arjen Robben and Frank Ribéry James quickly showed that he was not a winger in the same token and that he is more comfortable to play behind a natural striker. That position, however, had been taken by Thomas Müller and with Bayern firing Carlo Ancelotti and bringing in Jupp Heynckes, who is a big supporter of Müller, James’ star at Bayern seemed to fall before James could even fully arrive at the club. Now with Müller out James will be asked to play behind Lewandowski and with Bayern having several big games in quick succession James can show the world that he is still a big star.