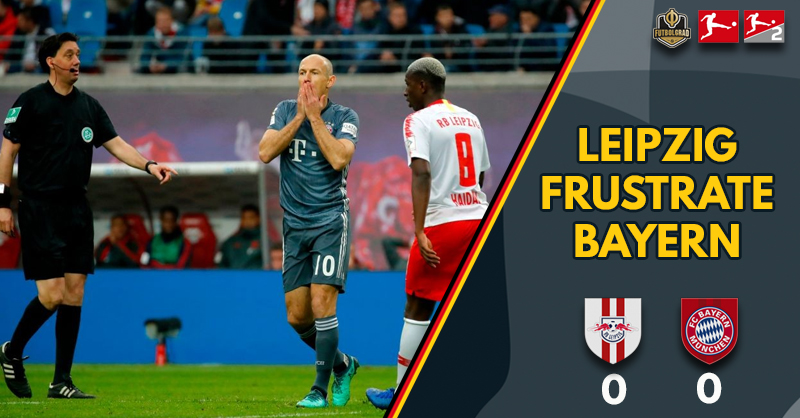 RB Leipzig vs Bayern München gave the visitors an opportunity to clinch their seventh straight Bundesliga title, but it was a nervous display by the champions – and now the race for the Meisterschale will go down to the last day.

RB Leipzig vs Bayern München: Failure to take the advantage 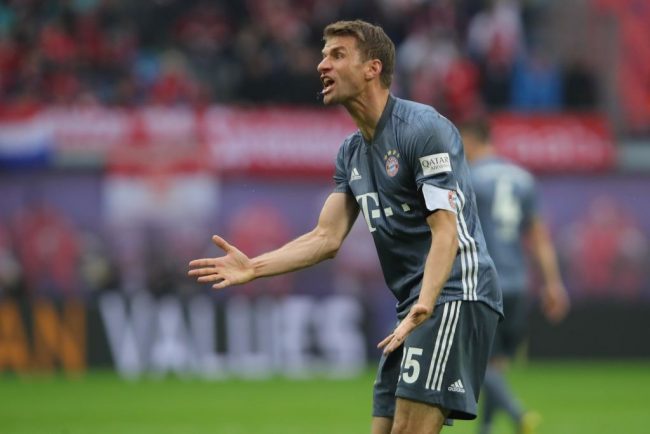 Although they sat four points clear at the start of Matchday 33, Bayern München started this fixture looking like they were afraid of the 90 minutes that awaited them.

Leipzig pressed their opponents from the first whistle, and as seen on many occasions previously this season – Bayern looked vulnerable.

As early as the second minute, Marcel Sabitzer left Niklas Süle a bystander, the Leipzig midfielder slipped a pass for Timo Werner to race after. Fortunately for Bayern, Sven Ulreich read the danger and just about beat the ex-Stuttgart attacker to the ball. It was though, an early warning sign that Niko Kovac’s men needed to be alert.

The first half came and went – Bayern had only managed to test Peter Gulacsi twice, and the Hungarian remained strong for both. The day looked to be a frustrating one for the champions-elect and by fulltime there were a few exasperated faces in the Bavarian camp.

Robert Lewandowski was unable to provide the spark up front for the visitors, while Thomas Müller was effectively policed by a well drilled back four.

Leipzig head coach Ralf Rangnick opted to switch from a back three, as seen for the previous four fixtures to a four, and it was a tactical move that denied Bayern their normal freedom in the wide areas. 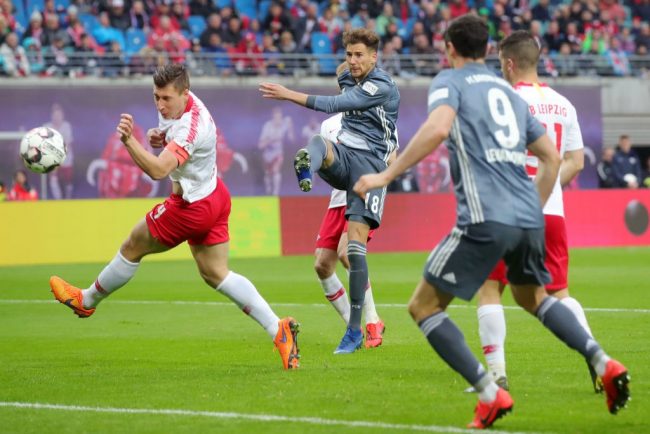 It was the finest of margins; ultimately it was Lewandowski’s toe that was adjudged to be more advanced than Willi Orban’s shoulder. While it led to frustrations from Bayern supporters – especially online – it was the correct call to chalk off Leon Goretzka’s well-taken volley.

VAR was brought in to make sure game-changing decisions were correctly given, despite the closeness of the call it remains the right one.

Phrases such as is this a ‘clear and obvious’ error do not relate to offside calls. Offside in an absolute – you are either offside or not, same as the ball is either all the way over the line or not. There is no subjectivity, and therefore no clear and obvious ‘clause’.

As the law stands, you are offside if:

‘any part of the head, body (that can legally play the ball) or feet are nearer to the opponents’ goal line than both the ball and the second-last opponent’.

Replays showed that the Polish striker was indeed closer to Leipzig’s goal than both the ball and Orban – by millimetres.

Had VAR been unavailable then the discussion would be that Bayern had won the title with an offside goal – whatever your personal thoughts on whether such a close call is in the spirit of the game, as the law stands the decision was correct in law.

Is it correct that the offside law should be delved into in such minute detail? Does Lewandowski actually gain any advantage by having his toe more advanced than the defender’s shoulder?

These are both good questions and ones that the IFAB should address, but as it stands – the officials can only go by the current wording of the law, therefore ‘no goal’ for offside was the right outcome.

RB Leipzig vs Bayern München: Niko Kovac on the title 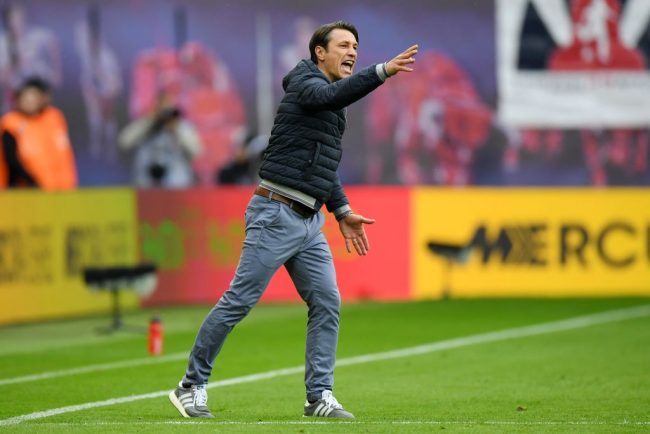 In a season where the Bayern coach has seen nothing but constant gossip surrounding his suitability for the role – he does still reamain favourite to be the trainer to have both hands on the Meisterschale next week.

Despite Dortmund pulling the gap down to two points, the Bavarians will play at home against an Eintracht Frankfurt side that has seemingly started to run out of steam after their incredible season.

The Croatian remains positive, speaking after the final whistle to Sky Sport DE, Kovac firmly believes that Bayern will retain their crown:

“I saw the Dortmund result after the game, the Bundesliga is so exciting – we’ll do it next week.

Compliments to my team. We were the dominating side, we created a lot of chances but failed to score. The offside decision was very, very close. It’s annoying that we didn’t secure the title today, but we’ll do it again at home next week” 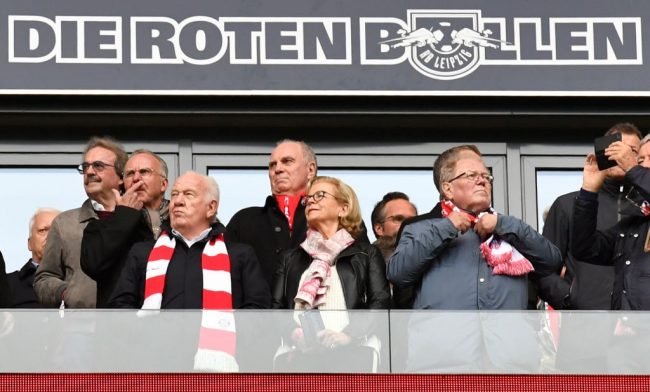 As mentioned, the chatter around the Bayern head coach being in charge next season just will not go away. Karl-Heinz Rummenigge and Uli Hoeneß have given mixed messages surrounding his future in the past.

Today at least they remained positive – especially with a view to next week and the upcoming Pokal Finale.

“The duration of his contract is well known. At the end of the day, we have to make sure that our success is continuous. You have to deliver a continuity of good performances and we will get that” Rummenigge said at fulltime.

Hoeneß wished to concentrate on the fixture against Frankfurt:

“I’m quite relaxed. If the team plays like today, we will not have a problem next week. I will sleep well because I know that if they fight and hang in there like today, we’ll be German champions on Saturday” he told reporters at the stadium. 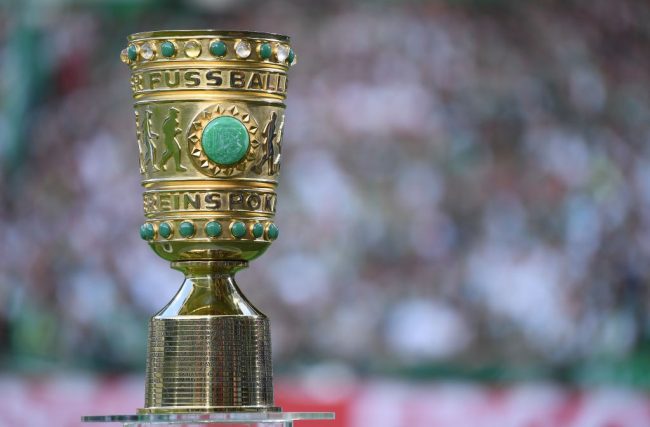 The DFB Pokal trophy – up for grabs as RB Leipzig face Bayern München on 25 May 2019 in Berlin’s Olympiastadion. (Photo: Stuart Franklin/Bongarts/Getty Images)

Of course, the Bundesliga title aside – this fixture was an insight into what lies in store on the 25 May in Berlin. The takeaway notes from the Saxony fixture show that both teams are exceptionally well balanced.

While Bayern may have drawn a blank today they did create chances, that on another day could well have resulted in goals for last season’s finalists.

Leipzig, who go into Berlin as Finale debutants, they gave an indication that their high press – coupled with Raganick’s tactical tweaks – are more than well equipped to cause Bayern plenty of problems.

Had the hosts shown a little more quality in the final third then today’s draw could have easily been a win, but they will know for certain that the same applies to their opponents.