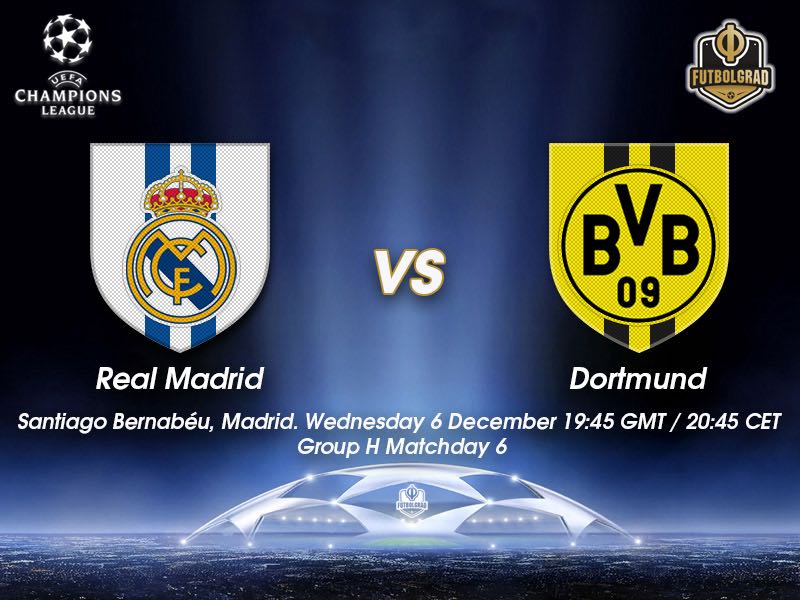 Real Madrid vs Borussia Dortmund will take place at the Bernabéu Stadium in Madrid. (Photo by Gonzalo Arroyo Moreno/Getty Images)

For the seventh time in history, Borussia Dortmund will travel to Madrid to face Real’s Galacticos and never before were Dortmund, a bigger outsider. The Yellow and Blacks are looking back to an implosion of epic proportions since mid-October when they were five points ahead of rivals Bayern München.

Now on matchday 14 of the Bundesliga Borussia Dortmund are sixth in the Bundesliga standings ten points behind Bayern München. The Yellow and Blacks have not won a game in the Bundesliga since September 30. In the Champions League Dortmund lost to Real Madrid, twice to Tottenham and managed just two draws against the Cypriot side APOEL.

Dortmund’s season thus far was culminated in the performance in the Revierderby against Schalke 04. Taking an early 4-0 lead Dortmund looked poised to leave the crisis behind them, but a catastrophic second half display that allowed Schalke to earn a 4-4 draw means that head coach Peter Bosz is now under immense pressure. There was even some expectations that Bosz could be fired following the 1-1 draw on the weekend, but sporting director Michael Zorc told the media on Saturday “we want to achieve the turnaround with Bosz.”

At the same time, it would be hard to imagine that Bosz will be allowed to stay at the club should Dortmund fail to qualify for the Europa League on Wednesday and not win against Werder Bremen on the weekend. With this in mind, the game against Real Madrid will be crucial not just for the club, but also the BVB bench boss.

Real Madrid in the meantime can no longer reach first place in the group after losing the head-to-head to Tottenham. Furthermore, Real are just fourth in La Liga at the moment, and like Borussia Dortmund need a win on Wednesday to shoe out talks of a crisis at the Bernabéu. Real Madrid have been undefeated in 16 games at home, and it is difficult to imagine that Dortmund in its current form can gain a positive result in Spain.

Real Madrid vs Borussia Dortmund – Players to look out for:

Cristiano Ronaldo remains Real Madrid’s biggest star. The 32-year-old Portuguese striker, however, has shown signs of age this season. Although he managed eight goals in five Champions League games this year his La Liga form has been poor, especially by his standards, scoring just two goals in ten games this season. Scoring just two goals and two assists in ten games Cristiano Ronaldo in many ways has been identified as the main reason for Real’s poor showings in the league. Cristiano Ronaldo in the meantime has blamed the departure of key players Alvaro Morata and James Rodríguez for his lack of productivity. There is, however, no doubt that Cristiano appears to be disgruntled about life in Spain at times. The tax affair and lack of appreciation by Real Madrid fans have created an atmosphere in which it is now unfeasible to envision a scenario where Cristiano Ronaldo could leave the club.

Pierre-Emerick Aubameyang was the tragic hero in the Revierderby. Aubameyang scored one goal and two assists against Schalke, but he also missed a crucial chance to make it 5-0 and was then sent off in the 55th minute for a rash challenge. Aubameyang has always walked a fine line since playing for the Yellow and Blacks. A fantastic scorer with the sort of antics that endears him to Dortmund’s followers when times are good, but makes him a controversial figure during difficult times.

Pierre-Emerick Aubameyang is looking to rebound after being criticised for his conduct during the Schalke game. (Photo by Lars Baron/Bongarts/Getty Images)