With Borussia Mönchengladbach’s Yann Sommer being the number one goalkeeper for Switzerland, Borussia Dortmund’s Roman Bürki will likely have to take a seat on the bench when Switzerland face Latvia on Saturday. After an inconsistent first season with die Schwarzgelben, however, Bürki is currently collecting arguments that he, and not Sommer should be the number one for Switzerland.

Most recently, Bürki was the key player against FC Ingolstadt 04 preserving Dortmund’s narrow 1-0 lead with an outstanding save against Australian international forward, Matthew Leckie. The game against Ingolstadt was exemplary of Bürki’s development since signing for Borussia Dortmund from SC Freiburg in the summer of 2015.

Roman Bürki – All his statistics show an upwards trend

The Swiss keeper saves more shots and concedes fewer goals than in his first season with Borussia Dortmund. Last season, Bürki conceded 34 goals in 33 games, which is 1.03 goals per game. In 18 games this year, however, Bürki had to collect the ball just 16 times out of his own net, which means an average of just 0.89 goals per game conceded. 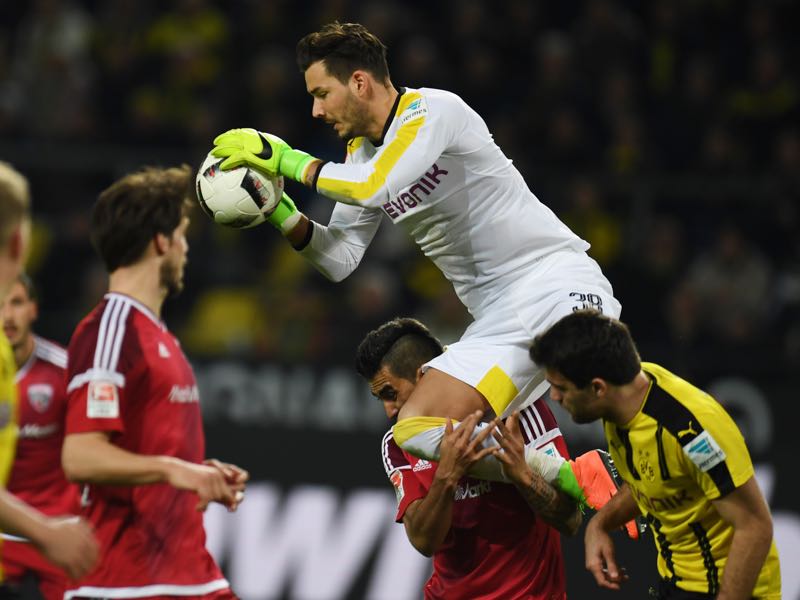 Roman Bürki has been omnipresent for Borussia Dortmund this season. (PATRIK STOLLARZ/AFP/Getty Images)

This does not mean, however, that Roman Bürki has been flawless. Dortmund’s most recent defeat against Hertha Berlin was put down to Bürki failing to stop Marvin Plattenhardt’s freekick which, despite being an absolute hammer, beat Bürki in the short corner.

Goals like the one scored by Plattenhardt have been the exception this season, however. In fact, Bürki’s consistency has meant that Dortmund head coach Thomas Tuchel is now giving the Swiss keeper the start in both the cup competitions—the Champions League and the DFB Pokal.

Bürki is now the number one in all competitions

Last season, Tuchel opted to field long-serving Dortmund keeper Roman Weidenfeller in the cup games. Weidenfeller, who was part of Germany’s World Cup winning side in Brazil three years ago, has now been demoted to the number two position, something that speaks volumes regarding Bürki’s development in Dortmund.

This is especially true when one considers that Weidenfeller, who was excellent against Real Madrid (2-2) when he had to to step in for the injured Bürki, still has the potential to be a number one goalkeeper. But Bürki has certain attributes that Weidenfeller, who is an old school goalkeeper, lacks. Bürki, unlike the 36-year-old Weidenfeller, has the ability to take part in the game, and has worked hard on his opening pass which, in turn, has improved Dortmund’s transition game from the back.

This particular attribute should also help Bürki to challenge Sommer for the role in the Swiss goal. Sommer’s biggest advantage has been his ability to be a playing goalkeeper, not unlike sweeper keeper Manuel Neuer. With his improved ability, combined with his physical presence (Bürki is four centimetres taller than Sommer) the BVB goalkeeper might be the better alternative for the Swiss goal.

In fact, playing with Weidenfeller has given Roman Bürki another edge. Weidenfeller, who played his youth career at 1.FC Kaiserslautern were he was formed by the hard school of legendary former goalkeeper and goalkeeping coach, Gerald Ehrmann, has always been very strong in breaking up one-on-one situations. Bürki now seems to have taken a leaf out of that particular approach by showing real perseverance when it comes to stopping opposite attackers on breakaways.

For Borussia Dortmund, who were rumoured to have explored other options last summer, Bürki’s development means that they can now focus their resources on strengthening other areas of the squad—especially as Bürki has developed into one of the strongest keepers in the Bundesliga.