Openly admitted as an almost completed move by Hoffenheim head coach Julian Nagelsmann a week ago kicker, Sport Bild and company reported “exclusively” what everyone already knew for several weeks. Sandro Wagner is going to leave 1899 Hoffenheim and join Bayern München on January 1, 2017, in a deal worth €12 million.

It was not surprising that the main protagonist of the deal, Bayern President Uli Hoeneß, more or less confirmed the deal already on Saturday. Speaking to Sport Bild Hoeneß said: “It is no secret that we are looking for a backup for Robert Lewandowski. It of course also depends on how we will play against Dortmund on Wednesday. If we can stay in all three competitions beyond the winter, the pressure on our squad will be even bigger.”

Although technically no longer the sporting director of the club the Sandro Wagner transfer is in many ways a typical Hoeneß transfer. The deal almost brings back nostalgic memories in which Bayern did not focus on buying the best players from all over the world, but instead excellent and steady Bundesliga players from their closest competition (no we have not lived under a rock the Dortmund transfers constitute world class transfers and as such are ignored for this article).

Sandro Wagner – €12 Million is a Steal in this Market

Considering the current transfer market Sandro Wagner for €12 million is a steal—especially when one remembers that Liverpool paid €41 million for Andy Carroll. At the same time, Bayern will have to ask themselves if Sandro Wagner is the sort of world-class striker that will make the club competitive in the UEFA Champions League this season.

In an ideal scenario, Robert Lewandowski should be fit to play every single game of course. But what happens should the Polish forward go down with an injury? Would Wagner be good enough to take his place against the likes of Real Madrid, FC Barcelona, Paris Saint-Germain and Juventus Turin? Because those are the sort of clubs, Bayern will have to compete against when it comes to the Champions League title. The other question is, is Sandro Wagner the sort of forward that fits into Bayern’s system?

Let us look at the first question first. Sandro Wagner had two decent seasons in the Bundesliga scoring 14 goals in 32 games for Darmstadt in 2015-16 and then 11 goals in 31 games in 2016-17 for Hoffenheim. Before joining Darmstadt Wagner never scored more than five goals a season since he became a fulltime Bundesliga player for Werder Bremen in 2010—in 159 Bundesliga games Wagner scored 36 goals. Those are not fantastic numbers, and it is only thanks to the last two and a half seasons—he has scored four goals in 11 Bundesliga games this season—that he has become an option for a club like Bayern.

There is no doubt that Sandro Wagner is a bit of a late bloomer. At the same time scoring for Darmstadt and Hoffenheim is not the same than producing for Bayern. Some would argue that playing in Bayern’s system would make life easier for the striker. His five goals in seven games for the German national team indeed suggest that this is the case. Playing with better players means better service, and for a power forward like Wagner, who is especially deadly in the box, the right kind of service is fundamental to be successful.

Hence, to answer the first question. Yes, Wagner is a current national team player, who has shown in the last two seasons that he can score not just on the Bundesliga level, but also for the German national team. Getting the job done for Germany is especially essential, Germany like Bayern play a dominant style of football where the team holds the majority of possession and Wagner has thrived in that sort of environment.

The German national team also serves as an excellent measure to answer the second question. Does Wagner fit into Bayern’s system? The short answer is yes. Wagner has demonstrated when playing for the national team that he can adapt to playing in teams that hold the majority of the ball. Furthermore, national team coach Joachim Löw has used Sandro Wagner in several formations in recent months, and Wagner has done reasonably well in the 3-5-2 and the 4-2-3-1.

The Past Shows: Bayern Need More than one Striker

Of course, the question is how much Wagner will play. In the treble winning season, Jupp Heynckes primarily used Mario Mandžukić and Mario Gomez as a backup. At the same time, Heynckes rotated frequently adapting his system depending on the situation using both strikers in critical moments. Wagner will need playing time ahead of the World Cup to make the squad, and with Bayern planning to go deep in three competitions, Wagner should be getting plenty of playing time in the Bundesliga and the Champions League.

Perhaps the only danger would be for Bayern to be eliminated in the DFB Pokal against Borussia Dortmund on Wednesday and to go out early in the Champions League. It would be hard to imagine Heynckes rotating much up front should Bayern play only in the Bundesliga. Given the Bavarians recent form such an early exit in both competitions appears unlikely. 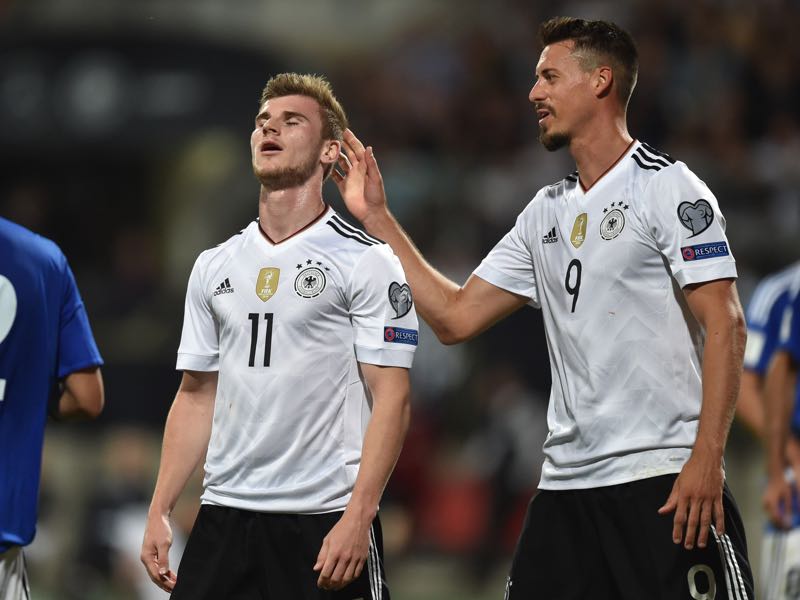 Sandro Wagner (r.) has done well playing together with the likes of Timo Werner (l.) for the German national team. (CHRISTOF STACHE/AFP/Getty Images)

With this in mind, Wagner should receive plenty of playing time until May. The striker might even become the critical piece in Bayern’s quest for another Champions League title. Last season the club was narrowly eliminated by Real Madrid in the Champions League. Lewandowski had to play the second leg with an injury and was not himself.

The lack of depth up-front was also quickly identified on the Futbolgrad Network following the exit against Real Madrid last season. Now with Wagner signed Bayern have fixed the problem by bringing in a German national team striker for €12 million. At first glance a bit of a cheap out, but on second glance a steal in a market in which most strikers command a much more significant transfer sum.