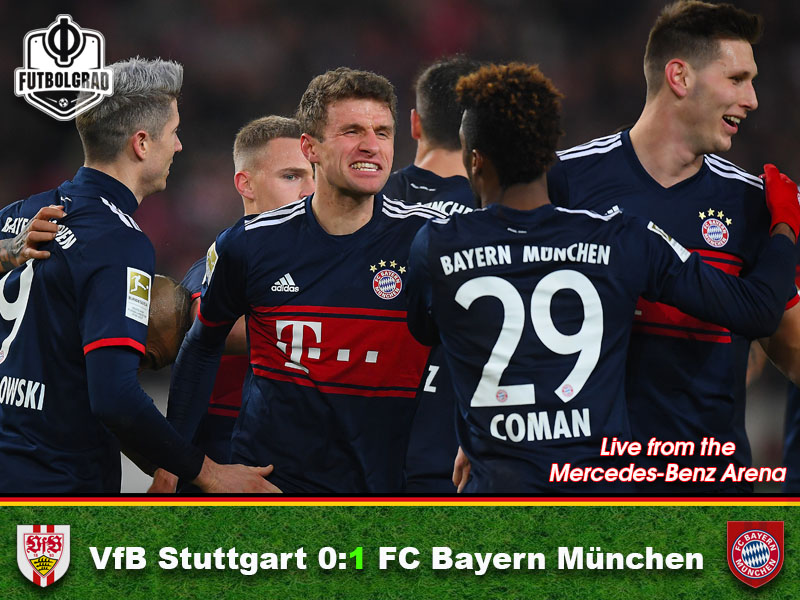 Known as the Südklassier, Stuttgart v Bayern München was a tightly contested affair with the Bavarians coming out on top thanks to Thomas Müller and Sven Ulreich.

VfB Stuttgart welcomed the Rekordmeister to Baden-Württemberg, the hosts in search of their first win in four Bundesliga games—Die Roten’s last victory coming against Borussia Dortmund on Matchday 12. On the final day of the Hinrunde, it was the hosts who will rue a missed opportunity to snatch a point from the league champions. Akolo fluffing his lines at the last second as Stuttgart brilliantly fought their way back into the fixture.

There was hardly time to draw breath before Lewandowski found space inside the Stuttgart box. For once the Polish goal machine was off target, placing his shot just the wrong side of Zieler’s post—perhaps the opportunity on 51 seconds came just a bit too soon. Only two minutes later and Bayern were again on the charge, this time Coman alert enough to play Lewandowski in, but Zieler read the situation well and the goalkeeper was out quickly to avert the danger. Rafina then hesitated in possession, allowing Andreas Beck to thread the ball into Akolo, Ulreich had anticipated the shot and was down quickly to deny the hosts a certain goal.

It was Stuttgart’s Özcan who threatened next, dropping his shoulder he skipped past the Bayern back line, only for only for Rafinha to recover and halt his run at the final moment — the Swabian’s began to look the more likely to score. Lackadaisical possession by VfB allowed Tolisso to break free with seven minutes left of the half, one on one with Zieler he was unable to find a way past the VfB ‘keeper. The midfielder should have done better; it was a clear opportunity to break the deadlock against the run of play just before the break.

The second half started as the first had ended—however, on the whole, it was a scrappy affair, both sides again lacking the absoulte piece of quality to make a difference in the final third.  Heynckes looked to his bench, on came Süle and Müller as Hummels and Tolisso made way. The Bundesliga champions had the higher percentage of possession but were unable to make it count, that was until Thomas Müller found himself free in the box. Stuttgart had defended well for 79 minutes, but a momentary lack of shape and Müller pounced—the World Cup winner afforded the space to turn and fire a shot past Zeiler from seven yards.

The goal deflated the hosts, and as the fixture went into the last five minutes, it was the visitors who looked more likely to add to their lead rather than give up ground. VfB then suddenly found an extra gear—a succession of corners threatened the Bayern goal, Ulreich turning the ball over the bar and into safety on two occasions inside the 90th minute. Bayern were under relentless attack as the board was held up signalling three additional minutes. Just as the game looked finished Santiago Ascacibar was brought down in the box by Süle, the referee said no initially, but it then went to VAR – penalty was the decision. With the final kick of the game, Akolo stepped up—Ulreich dived to his right to push the ball clear, at the very death Stuttgart had denied themselves a deserved point. 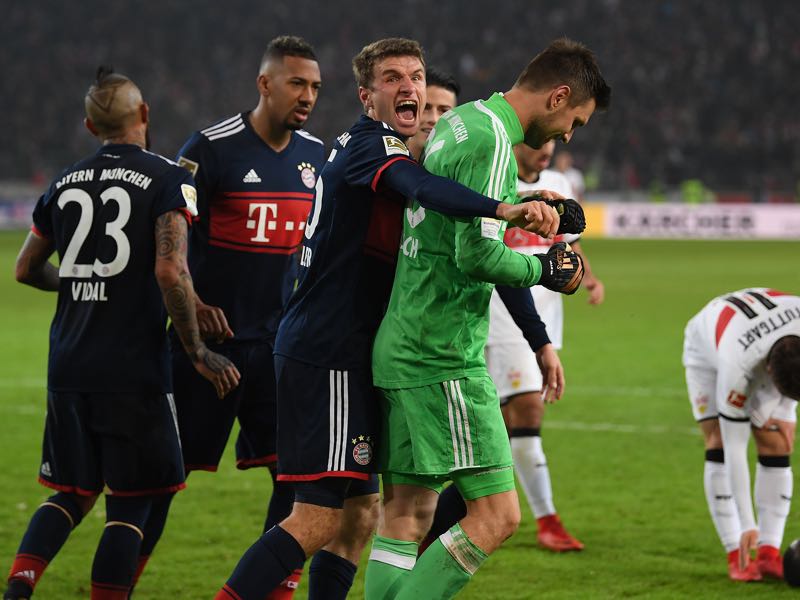 Thomas Müller (3rd from left) was the player of the match. (Photo by Matthias Hangst/Bongarts/Getty Images)

The Bundesliga statistics will forever show this result as a win for Bayern. However, in truth the champions will thank their lucky stars — Ulreich saving the last-minute penalty as VAR again showed its worth. Initially turned down, Süle’s challenge was quickly reviewed. With referee Patrick Ittrich consulting the pitch side monitor the correct decision was finally made.

Chris Williams is a freelance European football journalist. Covering the Bundesliga, Premier League and both of UEFA’s European club competitions. Published in both national and international publications, he also contributes to television and radio across the globe. A member of the UK’s Sports Journalist Association and the International Sports Press Association (AIPS) he lives and breathes football. Follow Chris Williams on Twitter @Chris78Williams