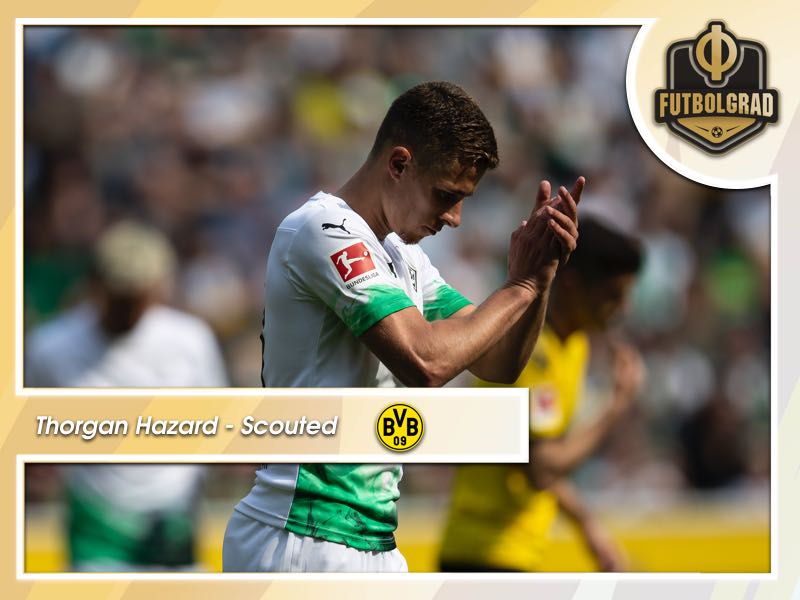 Boos and whistles accompanied Thorgan Hazard as he was brought off in what was supposedly his last game for Borussia Mönchengladbach on matchday 34. Gladbach fans did not take to kindly to the fact that the Belgian national team player had been adamant that he wanted to leave the club this summer.

The 26-year-old will take up the squad position that US international Christian Pulisic took up last season. The US national team player will leave Borussia Dortmund this summer and join the English Premier League side Chelsea in a deal worth €60 million.

For Dortmund, it is a bargain buy. They are bidding goodbye to a player, who at times struggled this year and in Thorgan Hazard have signed a player that was among the top performers at a club that finished fifth in the Bundesliga standings this season.

It is not the only key statistic that Thorgan Hazard stands out among his new teammates. In terms of goals per 90 minutes (0.38) only Paco Alcacer (1.01) and Marco Reus (0.57) have scored more often this season, and in terms of assists per 90 minutes, only Jadon Sancho (0.43) has been more successful this season than the 26-year-old Belgian (0.28)

Those numbers, however, come with a major caveat. Thorgan Hazard struggled in the second half of the season. The 26-year-old managed to score just one goal and five assists following the winter break. In fact, Gladbach’s result crisis that ultimately ended with the club deciding to replace head coach Dieter Hecking with RB Salzburg coach Marco Rose this summer came down to the Belgian’s production trying up in the Rückrunde.

“We were almost floating through the first half of the season,” Dieter Hecking said after Gladbach’s final game of the season against Borussia Dortmund. In the end, it was almost a miracle that the Foals came close to qualify for the Champions League and only their 2-0 defeat to Borussia Dortmund meant that they ultimately finished fifth in the standings.

In fact, in some ways, Gladbach’s season was almost a mirror of Dortmund’s season. A fantastic first half was somewhat undermined by a second half with plenty of inconsistent results. For Gladbach, that means that they now missed out on the Champions League and instead hope that the Thorgan Hazard money can provide the financial windfall to regenerate the squad.

For Dortmund, in the meantime, Hazard’s arrival is just one of three potential key signings that are geared towards providing more depth and tactical flexibility up front. “We believe our current squad has significant potential to make the next step,” the head of the licencing department Sebastian Kehl said.

Furthermore, aside from Pulisic, Dortmund are not expecting to lose any key players this summer. Thorgan Hazard, in fact, is not just a replacement for Pulisic but might also provide a bit of an upgrade, because whereas Pulisic was somewhat considered a Marco Reus light Hazard is a squad player that can add another element to the squad.

That is if Thorgan Hazard can play at the level that he showed at Gladbach during the first half of the season. But perhaps working together with his former head coach Lucien Favre will help.

Gladbach signed Thorgan Hazard on loan from Chelsea in 2014 and played 28 Bundesliga games under the current Dortmund head coach. It was, in fact, under Favre that Thorgan Hazard made the important step from a Chelsea development player to an important squad player at Borussia Mönchengladbach and eventually to a full-fledged Bundesliga star.

Now the two are re-unified at Borussia Dortmund, and it will be interesting to watch how Favre will use the winger. On paper, Thorgan Hazard can play several positions, including on the left-wing, false-nine and as a traditional number 10. Hence, Thorgan Hazard brings tactical variability to Dortmund’s attack and with that some extra-flexibility.

Although Favre primarily used the 4-2-3-1 formation at Dortmund this season, it is not necessarily his favourite formation. At Gladbach and later at OGC Nice Favre used various attacking formation including a 4-4-2 and 4-3-3 formation without a natural striker.

That formation could be one option with the arrival of Thorgan Hazard and the rumoured transfer of Julian Brandt. But that tactical flexibility will only work if Thorgan Hazard rediscovers the form that he displayed in the first half of the season.