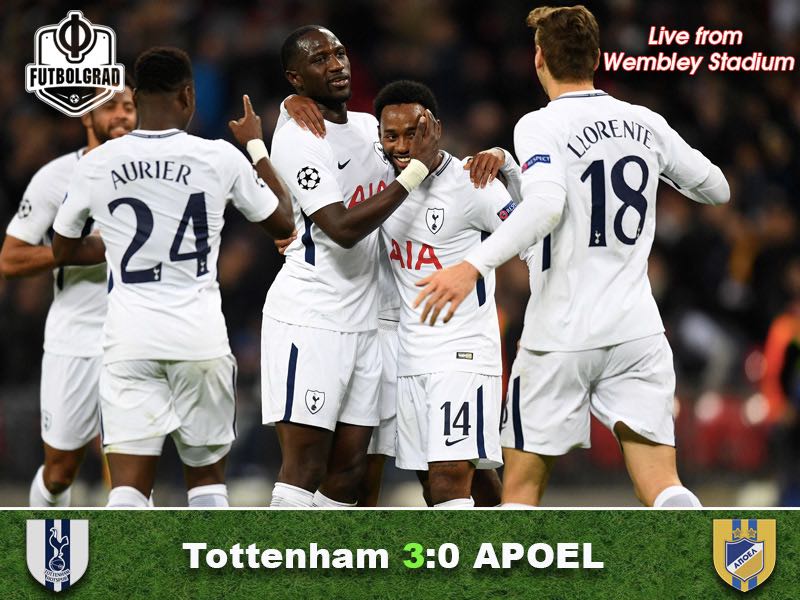 Tottenham v APOEL at Wembley produces no surprise as the English side easily defeat the Cypriot minnows.

With more at stake for the visiting team, it wasn’t surprising to see them on the front foot in the opening exchanges of the game. This, though, meant that there were already gaps opening up early on in the game and Spurs went close through Serge Aurier and Son Heung-min, the Korean drawing a save from Nauzet Perez in the APOEL goal.

Gaps in the APOEL defence continued to appear: soon after, in the 6th minute, Dele Alli burst into the box, getting around Praxitelis Vouros and drawing contact from him – not enough, though, for Slavko Vincic to deem it worthy of a penalty. When the ball fell at the feet of George-Kevin N’Koudou off the head of Fernando Llorente moments later, a goalmouth scramble ensued: Davinson Sanchez forcing a save out of Perez before N’Koudou pulled a headed clearance out of the APOEL defence.

With news of an early goal at the Bernabeu in favour of Zinedine Zidane’s Real Madrid, you might have expected APOEL to sit deeper and try and weather the early storm. This they did admirably until the 20th minute when Serge Aurier burst into space on the right before firing a low cross into Llorente. Pivoting, the Spaniard took a touch before stroking the ball past a helpless Perez.

The recently much-maligned Dele Alli proved to be the creative fulcrum for Spurs, often drifting out into a wide position on the left to occupy space opened out by Danny Rose and N’Koudou. No doubt his manager saw the fixture as an opportunity for a player who has looked listless of late to gain confidence and win back the affection of the home crowd. This he did, looking lively all night against an admittedly weaker opponent than he is used to facing.

After the goal came, the game settled into a somewhat more staid affair from the onslaught of the first quarter of an hour. In one of APOEL’s rare forays into the opposition half, Lorenzo Ebecilio looked to have been pulled down by Danny Rose just outside the Spurs box. Vigorous protest ensued from the yellow-shirted section of the crowd but, once again, the referee remained unmoved.

Just when the game looked like it might fizzle into the halftime interval, a moment of brilliance from Son Heung-min sparked the game back into the light. After a neat interchange between Son and Llorente at the edge of the box in the 37th minute, the South Korean found space, lifted up his head and curled a shot around Perez into the left-hand side of the goal.

Surprisingly, though, the direction of the momentum didn’t shift towards Spurs but to their opponents. In the two minutes after the goal, APOEL fashioned two chances – an open header that skewed off the head of Mikael Pote swiftly followed by a burst of pace from Stathis Aloneftis, whose shot was deflected wide by the youngster Juan Foyth.

The threat from Tottenham didn’t go away, though. With the halftime whistle fast approaching, Son Hueng-min worked his way into space outside the APOEL penalty area and, no doubt felling confident after his goal, fired a shot in a Nauzet Perez, who dived full length to his left to prevent the Spurs’ lead being increased further. When the referee finally did end the first half, Giorgos Donis’s men will have been pleased to get some respite from a home team who had barely needed to get out of first gear to find their way into a 2-0 lead.

The arrival of the second half occasioned much the same industry from APOEL that had made the first half so frenetic. This time, however, they didn’t find the Spurs counter-attack quite so boisterous. Finding himself in space on the corner of the box, Praxitelis Vouros fired the ball goalwards only to see it deflected wide off Danny Rose for a corner. Shortly after, APOEL forward Mickael Pote was clattered by Foyth in the box after losing control of the ball but to little avail.

Not liking the attention their defence were receiving, Spurs fought back – Georges-Kevin N’Koudou coming close but, as was becoming the order of the day, seeing his shot deflected wide off Vouros. And so it went on. In the 57th minute, after Fernando Llorente fluffed his lines, the ball fell at the feet of Aurier, the Frenchman powering in a shot which was parried by the APOEL goalkeeper. Moments later, Son fired wide from a freekick.

The game continued in this way throughout the opening period of the second half – ebbing and flowing backwards and forwards between the two sides. At times it felt more like a game of basketball than a game of football; each team trading attack for attack.

Given the temperature, Nauzet Perez will have been happy to have been kept busy as the game progressed. It was N’Koudou who tested him next, breaking down the left before firing low towards the far corner. Perez got down low to parry the ball before – relieved that no one was following the Frenchman into the box –  smothering it. 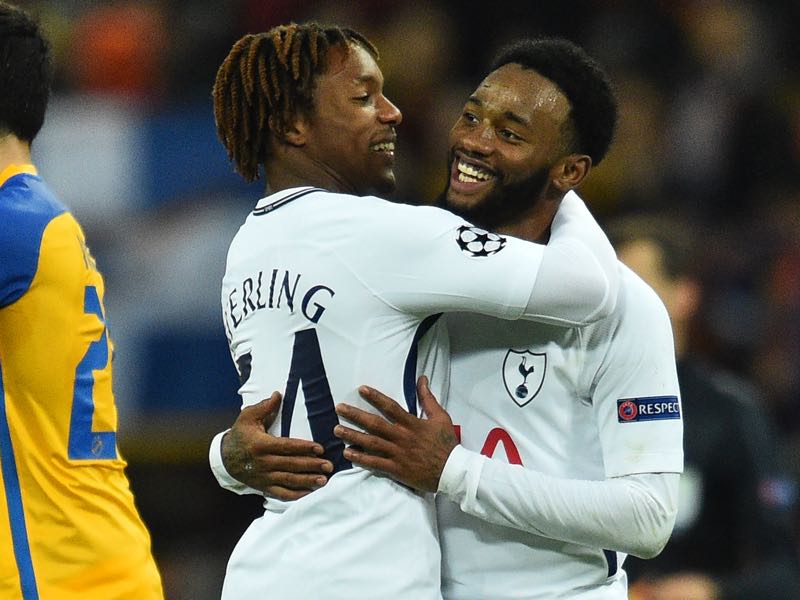 Tottenham had plenty to celebrate during the match. (GLYN KIRK/AFP/Getty Images)

As Son and Rose gave way to Mousa Dembele and Kyle Walker-Peters between the around the 70-minute mark, a tit-for-tat game became a more measured possession affair, with the Cypriot champions sitting deep and absorbing the pressure, forcing Spurs to be a little cannier in their approach.

With the ever industrious N’Koudou proving to be the most direct player on the pitch for Spurs with the departure of Son, he eventually got his reward in the 80th minute, squirreling his way into the box before firing into the goal not without the obliging help of a deflection off the leg of Nuno Morais.

As the game percolated to a conclusion, Spurs found themselves comfortably top of Group H and will look forward to the draw for the Round of 16 on Monday, December 11th. Despite their hiccough in the league, Mauricio Pochettino will be pleased with the way that his team have comported themselves in the group stages. There are, though, no easy draws in this year’s competition and Spurs could find themselves coming up against Bayern Munich, Juventus or Sevilla depending on how the balls come out of the pot.

Since arriving at the club in the summer from Swansea, the Spanish striker has become something of a bit-part player for Mauricio Pochettino’s side. Having not played a full 90 minutes for Spurs so far this season, the only other notable stretch of time he has played was in the 1-1 draw with Real Madrid at the Bernabeu where he played as a lone striker ahead of Harry Kane. Called upon from the start in this game, Llorente scored the opening goal and set up the second. He will have enjoyed the experience and his manager will be hoping that the confidence it brings will help him when coming off the bench in the Premier League. 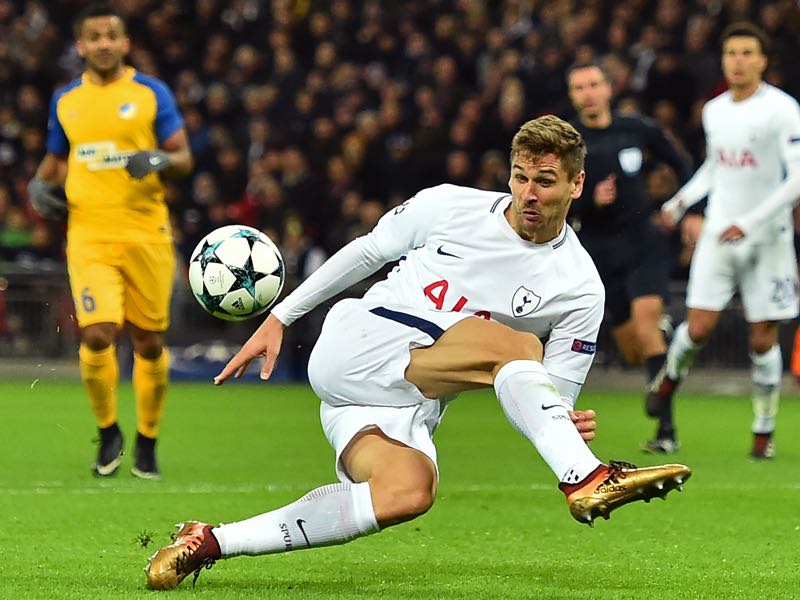 Tottenham v APOEL – Llorente was the player of the match. (GLYN KIRK/AFP/Getty Images)

After Spurs found themselves at the back end of a poor slump in the Premier League – without a win in four fixtures – it was questioned how Mauricio Pochettino would set up for this one. Would he look to rest key players or play them in a bid to invite some form of rejuvenation on their part? In the end, he chose a mixture of these two: playing the out of sorts Dele Alli and Danny Rose alongside the rarely-played George-Kevin N’Koudou and Fernando Llorente. In the end, it proved to be a good move for the Argentine as each of these players will have benefited from the experience. N’Koudou, in particular, will have felt that he made a good case to be included in his manager’s plans going forward.