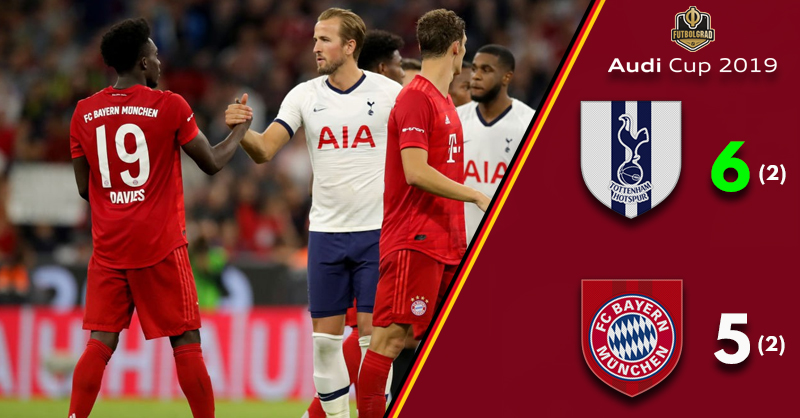 Tottenham Hotspur have won the 2019 Audi Cup. Last season’s Champions League runners-up defeated hosts Bayern 6-5 in a penalty shootout. While Tottenham started a team that is very close to their first team Bayern head coach Niko Kovac fielded a rather experimental side to start the match. Mauricio Pochettino started Dele Alli, Davinson Sanchez, Lucas Moura and goalkeeper Hugo Lloris. And it was Lucas Moura, who had the first chance of the game testing goalkeeper Manuel Neuer in the sixth minute. Then in the 13th minute, Georges-Kévin Nkoudou played in a brilliant ball from the left, Erik Lamela escaped Alphonso Davies in the centre and managed to beat keeper Neuer with a tap-in. One goal down and with an experimental lineup Bayern managed not just to keep the scoreline close but also challenging Spurs at times and Davies, in particular, despite his defensive lapsus managed several overlap runs.

Both teams then made several changes to start the second half. Bayern once again were the more dominant side, but Tottenham had the better chances. In the 58th minute Heung-Min Son went one-v-one against Sven Ulreich, but the keeper got enough on of the ball to redirect the shot past the goal. Just two minutes later, it would be 2-0. Harry Kane spotted Christian Eriksen, and the Dane scored from 18-yards out. But Bayern got quickly back into the match, and it was the two young stars that would make it happen. Davies now further up after David Alaba came up played a fantastic pass to Fiete Arp, who broke into the box and scored with a low drive. In the 70th minute, Kovac brought on Kingsley Coman, Robert Lewandowski and Thomas Müller. But Coman lasted just six minutes and had to be brought off after a foul by defender Juan Foyth. Nonetheless, the substitutions would have some impact when Thomas Müller played a cross pass to Davies and the Canadian beat Paulo Gazzaniga with a shot from 24-yards. The goal send the game into penalties where Gazzaniga, however, would have the last laugh as the keeper would stop Jérôme Boateng’s penalty to win the Audi Cup for Tottenham. 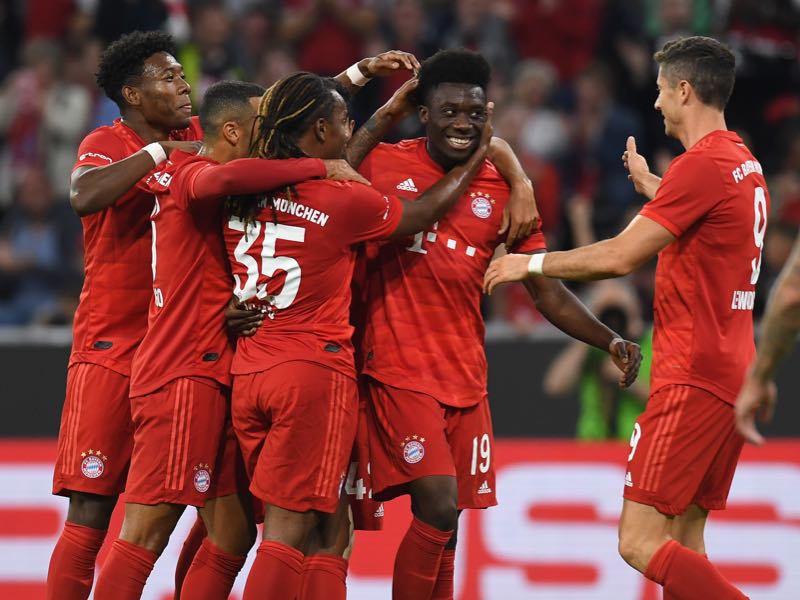 Alphonso Davies once again started play as a left-back in Niko Kovać’s 4-3-3 formation. Tactically Davies looked comfortable when going forward and his overlapping runs not only created chances but would also draw away an extra defender out wide. That, in turn, meant that winger Sarpeet Singh and striker Arp had more room upfront. At the same time, however, Davies also came a step too late when Lamela scored the opening goal. Then in the second half, he was moved further up the field and first assisted Fiete Arp’s goal and then scored a stunning goal himself. The game once again highlighted that Davies seems to be more comfortable further up the field.

Fiete Arp has been the biggest winner of Bayern’s preseason preparation. The Hamburg striker was a star at the International Champions Cup this summer and had some brilliant interplay with Davies tonight. The two, in fact, highlighted that they could very well be the future for that club. Davies little flick and Arp’s run-in made for a fantastic goal. Overall, Arp had several chances throughout the 70 minutes he was on the field and today made a good argument that he could be more than just a backup to number one striker Robert Lewandowski.

It was difficult picking a Tottenham star tonight. Although Spurs won the game their biggest strength was the collective and not individual performances. One player, who, however, had a fantastic night and perhaps send out a bit of reminder about his existence is Argentine forward Erik Lamela. Lamela scored a beautiful goal to give Tottenham the lead and was brilliant throughout the first 45 minutes.

The Audi Cup concludes Bayern preseason. The Bavarian giants will meet Borussia Dortmund in the DFL Supercup on Saturday and then play Energie Cottbus in the DFB Pokal one week later. But while the preseason is over some headaches remain for head coach Kovac. Bayern started the game without the injured Serge Gnabry and then lost Kingsley Coman in the second half. As a result, Canadian winger Davies is the only healthy winger in the squad—Thomas Müller is more of a playmaker or false-nine. Hence, many Bayern fans are hopeful that the club can sign Leroy Sané before the start of the season—meanwhile reports that the club have signed Leon Bailey could be a bit premature.