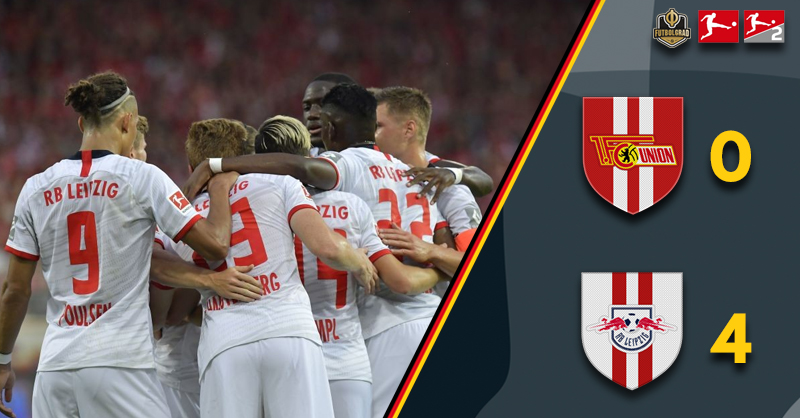 Leipzig give Union a lesson in finishing

RB Leipzig dispatched Union Berlin with relative ease on Sunday afternoon as it became a debut to forget for the Bundesliga’s newest team.

‘Welcome to the Bundesliga’ – it came at the exact wrong moment for the home fans, their atmosphere boycott lifted on the 15th minute – The Union fans showing their disdain for the Leipzig project by remaining silent for the first part of the game.

But just as the Eisern Union were about to explode into life, Marcel Halstenberg unleashed a wonderful shot that only had one outcome from the moment it left his foot.

One became two on the half-hour mark – but not before we’d seen VAR deployed for the new handball laws. Yussuf Poulsen adjudged to have handled in the build-up to Lukas Klostermann’s finish. As it was, the chalk-off didn’t matter, Marcel Sabitzer’s rain-sodden celebration was not in the Union plans with only a third of the match played.

The home side had their chances – Robert Andrich and Grischa Prömel both had opportunities to beat Péter Gulácsi, but their execution in front of goal wasn’t on the same level as their opponents.

Timo Werner showed the Bundesliga debutants just how to finish with three minutes of the half remaining. The Germany international broke through the Union backline and rocketed a shot past Rafal Gikiewicz – hit with power and venom, the strike replicated Leipzig’s approach to the half.

Whatever the future holds for Union’s first season in the top flight, Urs Fischer will have to ensure his side keep fighting – and 3-0 down at half-time that is exactly what the Iron Union did when they came out for the second half.

For all their hard work and fight, it was no match for Leipzig’s superior quality. Despite the hosts pushing for an immediate response, it was Werner who went closest – with just two minutes gone in the half.

When the chance came, Union couldn’t take it. With 54 minutes gone Suleiman Abdullahi found himself one-on-one with a retreating Gulácsi – the winger ran out of steam and ideas as the chance fizzled out.

The gulf in quality was evident, but it didn’t dampen the home crowd spirits – if Union could harness the power of the Stadion An der Alten Försterei they could be a real danger. What can’t be laid at the door of the Bundesliga’s newest club is a lack of desire, Fischer couldn’t have asked from anything more of his side as the hour mark passed.

But again, for all their drive and desire it was the opponents quality that undone Union. Sabitzer was controlling the play for Leipzig and his cross on 69 minutes was placed home by Christopher Nkunku. It was a harsh lesson for the side in red, but one they must learn quickly if they are to avoid the relegation places come May. 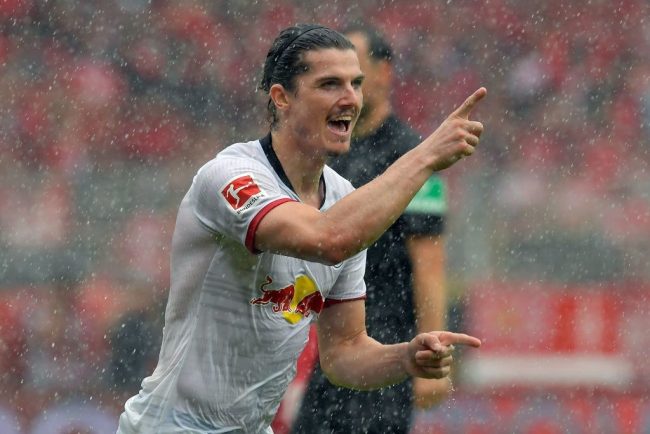 The winger come forward had a tremendous game. Not only did he get himself on the scoresheet, but the Austrian also grabbed a hat-trick of assists.  He could be key to the style of play Julian Nagelsmann is trying to enforce on Leipzig, and it’s started in the best possible way.

The Sweedish forward fed on scraps for the entire 70 minutes he was on the field. That didn’t stop him tirelessly making good runs or working hard both in and out of possession. The 28-year-old cut a frustrated figure when he was substituted but he’d given his all.

Possibly the best attacking left-back in the Bundesliga? It’s a big question, but one he consistently answers – today his drive and linkup play was matched by his finish.

Union Berlin’s debut in the Bundesliga didn’t go exactly to plan – they were hammered by Leipzig, the gulf in class evident across the entire pitch. Urs Fischer will have to pick his side up quickly from this, the big games come thick and fast, their next home opponents are Borussia Dortmund.

Loading...
Newer Post
Michaël Cuisance: Can he be a modern number 6 for Bayern?
Older Post
Eintracht Frankfurt strike early to take all three points against Hoffenheim