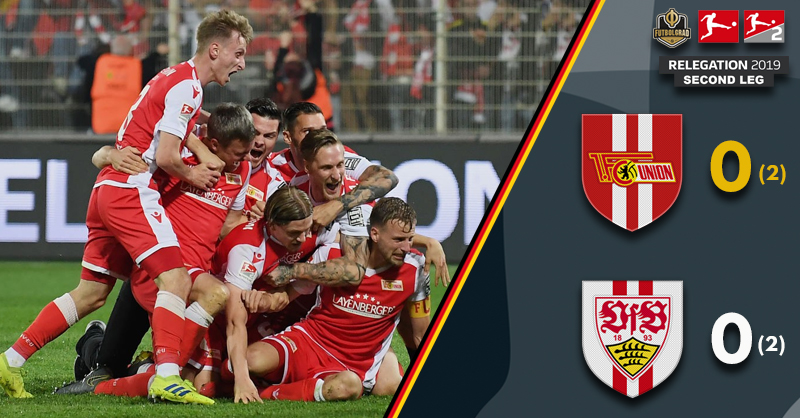 Union Berlin v Stuttgart the conclusion of the Bundesliga season ended with a true relegation battle and Berlin’s promotion to the Bundesliga. “We did everything all year to be promoted,” Urs Fischer said after the game.

VfB knew that a draw would not be enough after the 2-2 draw from the first leg and pressed from the start and in the 4th minute had the first chance. But Union’s keeper Rafal Gikiewicz managed to block Ozan Kabak’s low shot after a corner.

At least that is what the Stuttgart fans thought. Dennis Aogo had circled home a wonderful freekick but Nicolas Gonzalez was in an offside position in front of Gikiewicz irritating the keeper, and the goal was rightfully chalked off.

Stuttgart’s Anastasios Donis (11′) then had the next chance but missed the goal from six yards out.

What followed was a curious scene. Union Berlin’s forward Sebastian Andersson collided with Holger Badstuber and Kabak. Both Kabak and Badstuber suffered cuts and had to be treated for four minutes.

Two Stuttgart defenders with bandaged heads and a Union side fighting for every centimetre of ground. It was a relegation battle and not a football match for much of the first half.

Chances, however, were few and far between in the first 45 minutes. In the 45th minute, Steven Zuber tested Gikiewicz with a curled effort from 23-yards. Stuttgart had 7-1 shots on goal in the first half, but Union maintained the advantage.

Stuttgart, in the meantime, had the majority of possession and spent the majority of the second half in the attacking third but could not find a way through until the 64th minute when Chadrac Akolo tested Gikiewicz.

Then going the other way Union Berlin’s Suleiman Abdullahi hit the post twice.

First, in the 64th minute, the striker hammered the ball from a close range on the far post. Abdullahi then had another chance in the 66th minute. After a long ball, Abdullahi was brought down fairly by Kabak but while falling managed to tap the ball past keeper Ron-Robert Zieler but once again the ball hit the post.

A flurry of chances that only briefly interrupted the relegation battle. “It was a fantastic performance by the team,” Fischer said.

For Stuttgart Union’s 18-yard box, in fact, was like a fortress and Swabians simply could not find a way through until the 89th minute when Benjamin Pavard tested Gikieewicz with a shot that was eerily similar to his goal at the World Cup, with the difference that Gikiewicz kept the ball out.

Five minutes were added. But it was not enough for Stuttgart to score the goal they needed to stay in the Bundesliga. Instead, the stadium gates opened up allowing Union fans to flood the field and party with their heroes. “I always believed, at least at the point when the referee blew the whistle,” Fischer concluded.

Rafal Gikiewicz was the man of the match. The Union Berlin keeper was excellent and kept the clean sheet needed to secure promotion. 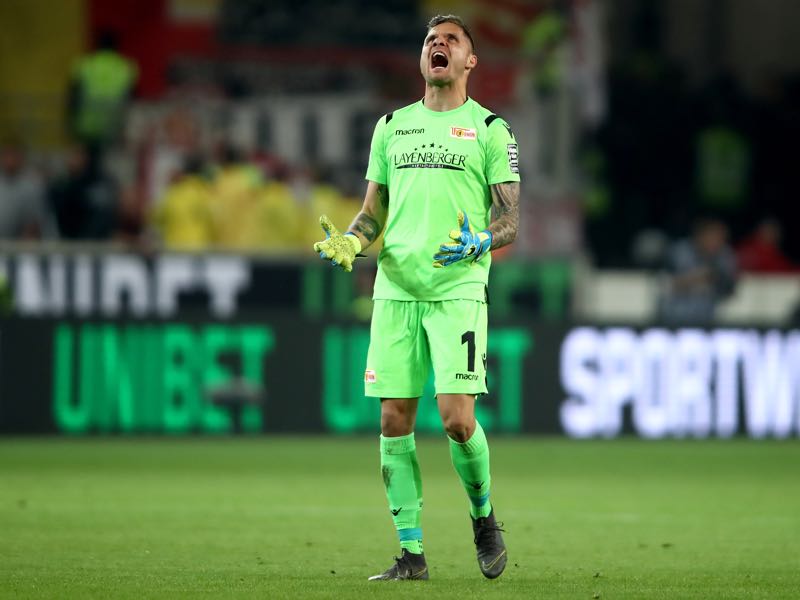 “It is unbelievable, you can’t fight more than we did today,” Michael Parensen said. For Union Berlin it was a big turnaround. The club from the capital failed to achieve promotion on matchday 34 and were the outsiders heading into the match. “We are fighting all the time,” Sebastian Andersson said after the game.