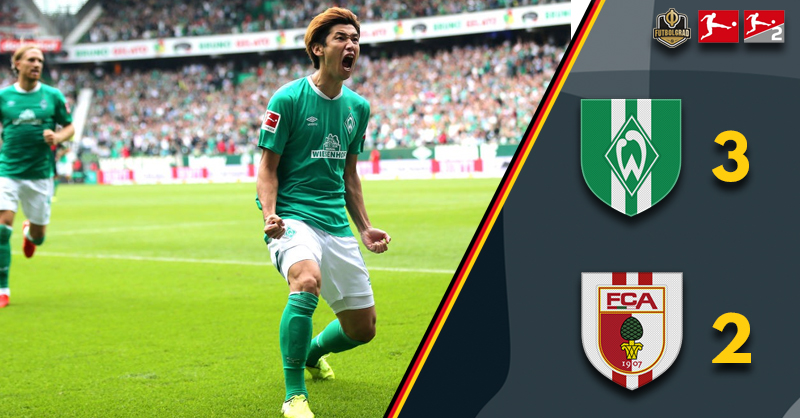 Werder Bremen nervously hold on to edge past Augsburg

Werder Bremen just about held on to victory as they nervously edged past Augsburg in an incident pack Sunday afternoon at the Weserstadion.

A fiery fixture took just six minutes to explode into life, Yuya Osako cooling stroking the ball past Tomas Koubek to give the hosts the lead – however, the goal was all about the assist from Niclas Füllkrug. A delightful chip that left the entire Augsburg defence flatfooted.

The Fuggerstädter’s response? Almost immediate – some wonderful work on the left by Phillip Max was matched by Stephan Lichtsteiner on the right.

It was the sort of whipped-in cross that forwards dream about, but it was a midfielder on hand to flick the ball into the net. Ruben Vargas’s deft touch enough to leave Jiří Pavlenka rooted to the spot, one-one and we had only 12 minutes on the clock.

Lichtsteiner – after proving pivotal for Martin Schmidt – was about to lose his head, twice in quick succession but not before American starlet Josh Sargent was to write his name all over the fixture.

The USMNT international plucked a Nuri Sahin chip out of the Bremen sky, then calmly knocked in his first Bundesliga goal of the season. The control and finish at odds with his teenage years, the Pizarro effect rubbing off on the 19-year-old.

Augsburg’s afternoon got worse when Lichtsteiner was dismissed. The ex-Arsenal player involved in a fracas that ended with him pushing over Davy Klaassen. Nine minutes later, another impetuous decision – Sören Storks had seen enough, the day was over for the summer arrival.

The extra space afforded to Werder allowed them to take their attacking up a notch. Sargent could have had a second, while Klaassen began to dictate the fast tempo – his link-up play with Füllkrug was causing Schmidt’s side no end of problems.

Nuri Şahin, playing in the hole behind the Bremen attack, was shining as brightly as the imposing Weserstadion floodlights -as the half ended the Bavarian visitors looked to be in trouble.

Whatever Schmidt said at half-time certainly worked, his Augsburg side came out a man down but full of intent. That purpose paid off just 60 seconds later – Vargas grabbed his second, tapping into an empty net after a quick break down the right-hand flank by Florian Niederlechner.

Florian Kohfeldt was visibly frustrated on the sideline, gesticulating at every forced and poorly executed pass. The hosts had the lion’s share of possession – 87% at one time, yet they were lacking their first half quality and patience.

Snapshots and overhit passes eventually gave way to methodical attacking, and with overall superiority, a third goal looked inevitable. Marco Friedl picked out Osako with a pinpoint delivery and the Japanese forward volleyed the ball into the net.

Augsburg hadn’t finished, they continued to threaten a nervous Bremen whenever they attacked, the introduction of Claudio Pizarro alleviated the tension in the stadium but not on the pitch, Max stinging the gloves of Pavlenka with six minutes remaining from a dangeroulsy placed freekick.

Werder just about held on to take a valuable three points, but it was a nervous affair. 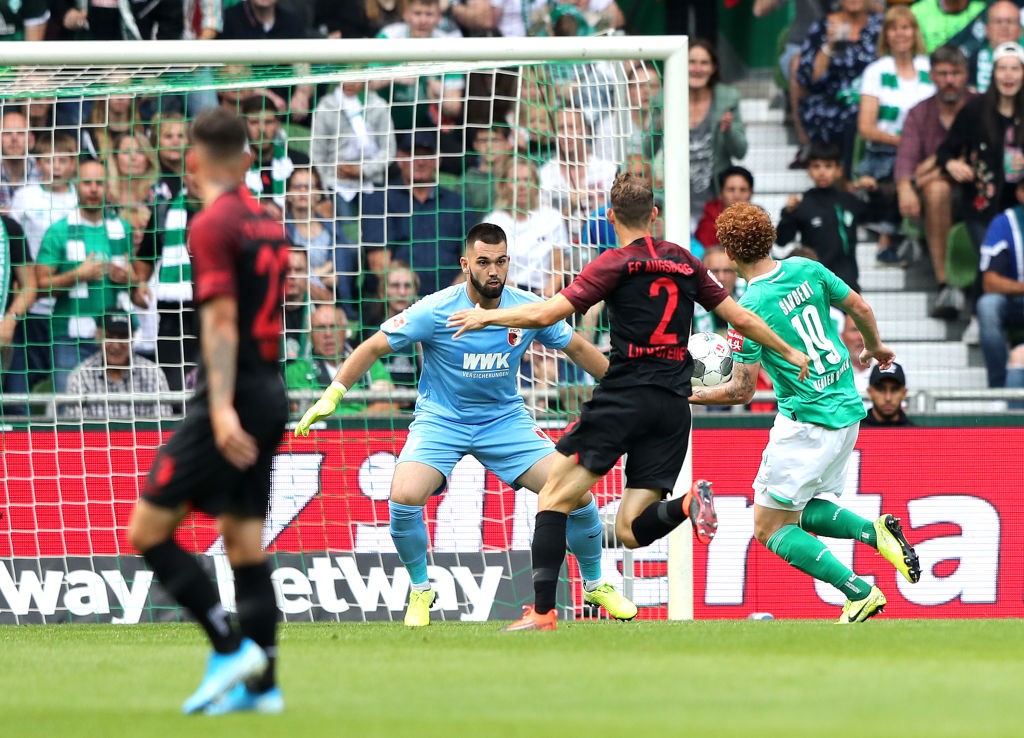 Josh Sargent of scores during the Bundesliga Werder Bremen vs Augsburg at the Weserstadion on September 01, 2019 in Bremen, Germany. (Photo: Christof Koepsel/Bongarts/Getty Images)

The American teenager twisted and turned his Ausgburg opponents inside-out for 90 minutes, at 19-years-old he looks to be an incredible future talent – possibly the best the USMNT have on German soil, although Tyler Adams may have something to say about that. Sargent’s goal epitomised his play – outstanding improvisation with a tangible end product.

Three shots on target and two goals, his eye for the net ensured Augsburg had a say in the fixture until his withdrawal on 73 minutes. A strange decision from Schmidt as the Swiss winger looked capable of registering a first Bundesliga hat-trick.

A wonderfully taken brace to give the hosts the lead twice set the Japanese forward up for a tremendous afternoon’s work. His off the ball movement a joy to watch as much as his finishing.

It was a nervous home victory for Werder, on an afternoon when they should have really been out of sight with twenty minutes remaining. Florian Kohfeldt will need to address the shortcomings at the back, while Martin Schmidt will have seen enough to give him hope that Augsburg’s poor start can be rectified.