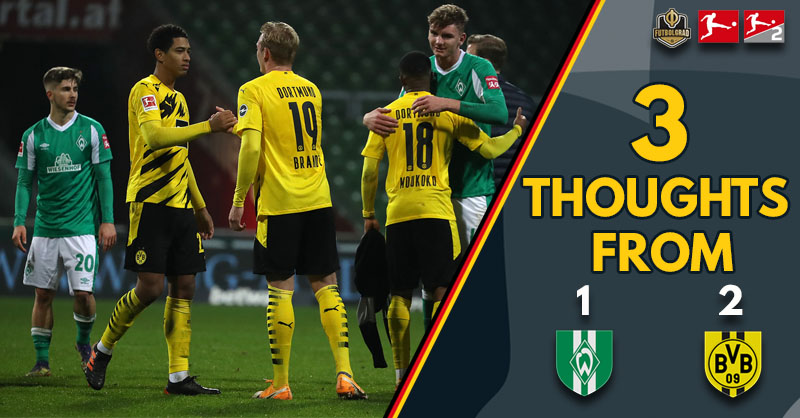 Edin Terzic took charge of Dortmund for the first time since Sunday’s dismissal of Lucien Favre. With the Black and Yellows looking less than convincing of late changes were made immediately, and Marco Reus’ late penalty ensured Werder Bremen vs Borussia Dortmund ended in a 2-1 victory for the interim boss. 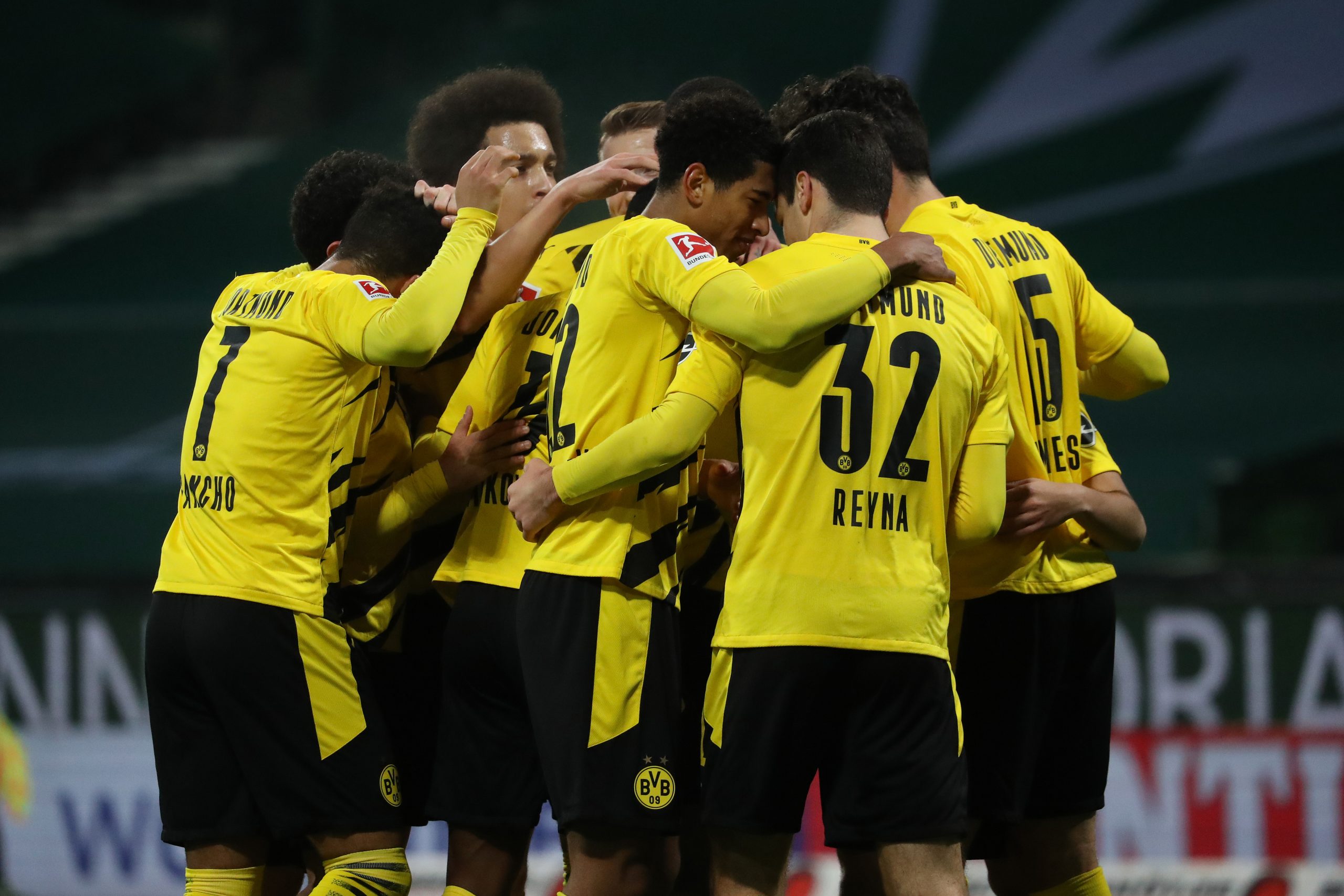 A lot had been made of the playing style under Favre. Predominantly opting for a back three, and coupled with a lack of urgency, it eventually ended in fierce criticism from the players.

Would Terzic begin by changing the most obvious element of Dortmund’s season? Yes, he would, opting for a more traditional 4-2-3-1 as well as giving highly-rated 16-year-old Youssoufa Moukoko his first start.

The tweaks were easy to see immediately, even if the interim coach had only one real session with his squad. Gone was the passive narrow nature of Favre’s style, replaced with an expansive higher tempo football. After just 12 minutes it paid off.

Raphael Guerreiro’s finish was cute, but the buildup play witnessed a return of the ‘high press’ while the ball was moved around the pitch much quicker than seen in the past three weeks.

For the majority of the fixture, Dortmund’s average positions were also much higher up the pitch, but the occasional lapse into some tepid passive football showed there is still work for the new man to oversee–old habits die hard under pressure.

There has been much made of the exciting 16-year-old. Making his Bundesliga debut hours after turning the required age, it was swiftly followed by an outing in the UEFA Champions League.

Handed a first start (in place of the injured Erling Haaland) showed exactly how much faith Terzic has in the wunderkind, and for good reason. At every level below the pro one, Moukoko has excelled. In just 3 games with the U19s this season he registered 10 goals and one assist, hitting the net every 27 minutes on average–an extraordinary statistic.

The signs are there that he will develop into a quality first-team player. Although on another occasion, he could have quite easily notched two Bundesliga goals against Bremen, there can be little criticism aimed at the young teenager.

His positional awareness was excellent, even if his finishing let him down–a case of nerves is to be expected with a step up in opposition. Hesitating ever so slightly for his two good chances, he missed the ball by inches.

Confidence in his own ability at this level will be one for Terzic to work on. You have the feeling once Moukoko does find the net, the floodgates could open. 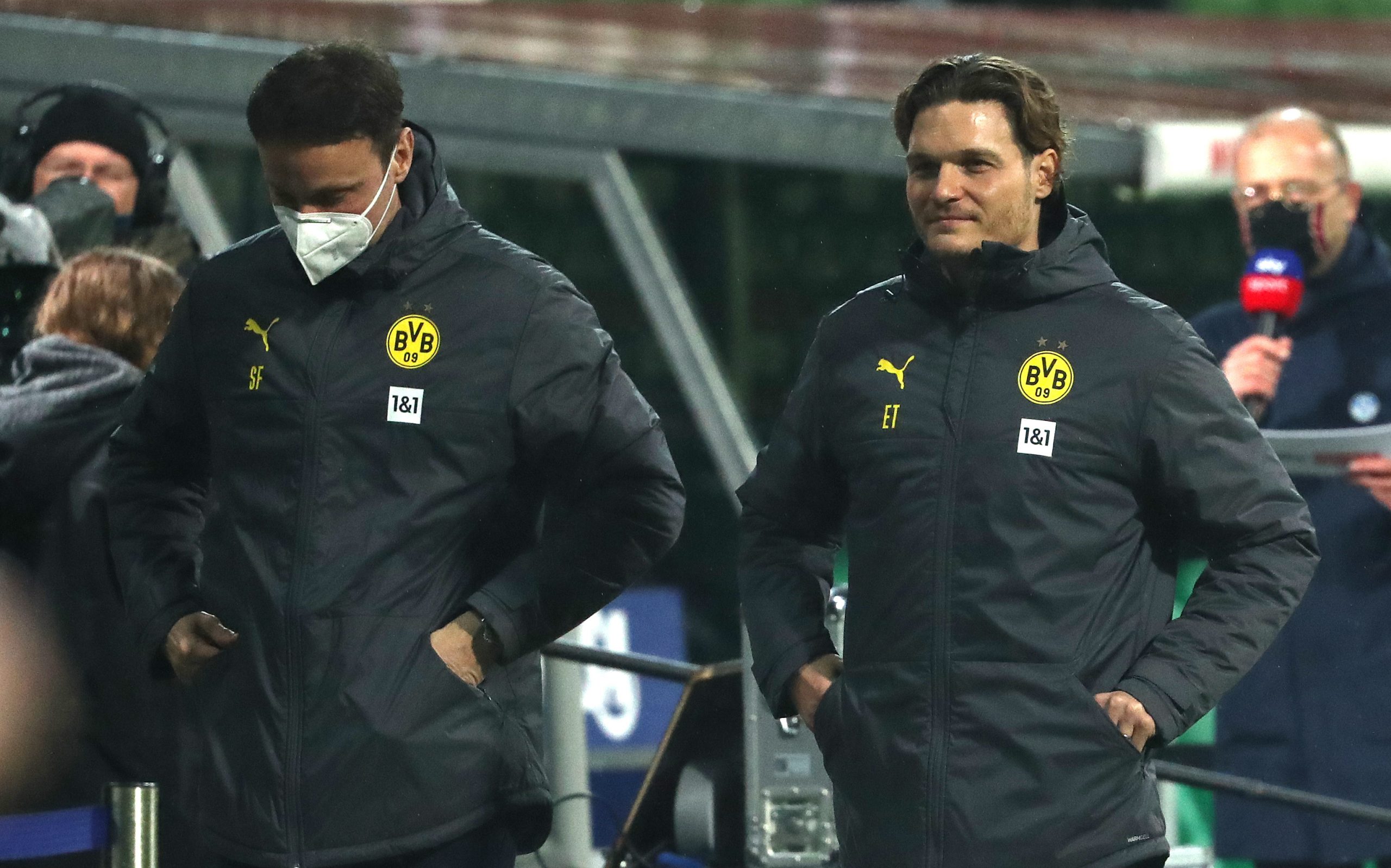 It may have been a little scrappy towards the end, but the prospect of picking up their first victory–after failing to register one against Köln, Frankfurt and Stuttgart evidently played on the minds of those on the Weser-Stadion pitch.

Terzic will be happy to see three points registered after a rollercoaster of a week, and for the most part, his tactics showed that Dortmund can shake off a lack of adventure, but it will take a few more sessions to remove old habits, replacing them with something more akin to a traditional Black and Yellow style.

Against an opponent who made them work hard, it can be considered a good start. The lack of Champions League football until the New Year should also help with fatigue, which did begin to rear its head as the final whistle grew closer.

Mats Hummels, Jude Bellingham and Jadon Sancho looked tired. With Sancho seemingly out of sorts this season, one of the new boss’ main man-management duties will be to get the Englishman back to the heights seen over the past 18 months.

One thing is for sure, the return of Haaland will suit this new system and style to a tee, he might be watching on and thinking he can reach those 50 goals he set himself after all.

Subs: 73′ Brandt for Bellingham, 80′ Can for Moukoko, 85′ Zagadou for Hummels, Piszczek for Morey