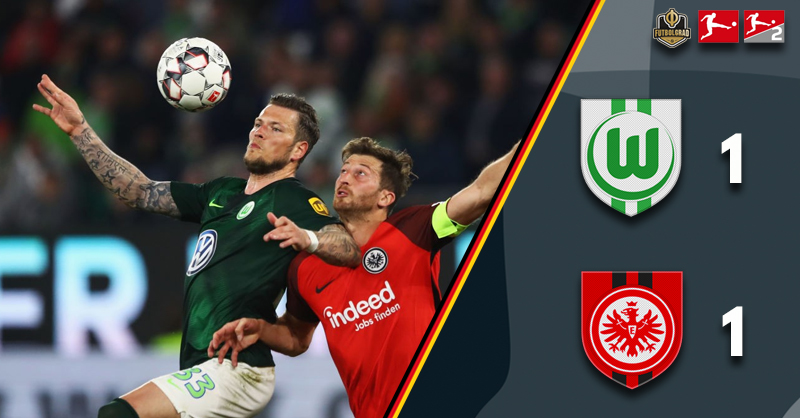 Wolfsburg v Eintracht Frankfurt kicked off with the latest round of Monday night protests. Monday games will be ended at the start of the 2021/22 season, but fans protested nonetheless by throwing Easter Eggs on the pitch. On top of the protest, the fans also refused to chant all in the background of a match that was massive in terms of the chase for the European places.

Nonetheless, was an intense game on the pitch and it took just until the tenth minute for the first chance to materialise with Wout Weghorst missing a sitter. The Dutch forward was left wide open in the box, and his shot beat Frankfurt keeper Kevin Trapp, but Makoto Hasebe had rushed back and cleared the ball off the line.

It was an interesting start to the game overall. Both sides almost played a counter-pressing style, which means that the midfield was quickly transitioned by either side when the ball was won.

Both sides had chances. Luka Jović (30′) was left wide open but could not beat Pavao Parvan, and Gonçalo Paciência (34′) missed a short-range header. Meanwhile, Yannick Gerhardt missed a header in the 31′ minute, and Admir Mehmedi tested Trapp with a shot from outside the box.

Then in the 37′ minute, Trapp produced one of his best stops of the season. Weghorst stopped the ball with his back to the goal, turned and shot, but Trapp was down to keep the ball out. Going the other direction Filip Kostić’s shot just missed the target of Pavan’s goal and the keeper had to then be brilliant in the 40′ to keep out a Paciência header from six yards out.

Within ten minutes of the second half, Wolfsburg had the biggest chance to open the scoring. Robin Knoche got on the end of a Wolfsburg corner his header hit the underside of the bar and from there jumped back out onto the pitch.

Wolfsburg were now the more dominant side, and in the 64′ minute Maximilian Arnold hit the post. Trapp cleared a corner with his fist, but Arnold with a volley and the ball zipped through Frankfurt’s defence and then hit the far post. Frankfurt, at this stage, struggled, in particular, when defending set pieces with every corner and freekick by the Wolves causing danger.

A set-piece produced Wolfsburg’s next chance in the 76′ minute. The Wolves were awarded a freekick from 25-yards out, Mehmedi run over the ball, and Arnold carried the ball in and struck the ball well, Trapp could not handle the ball, but Daniel Ginczek failed to put away the rebound.

Then against the run of play, Frankfurt opened the scoring in the 79′. Kostić rushed forward unleashed a shot from outside the box that was redirected and fell kindly for Jonathan de Guzman inside the six-yard box, and the midfielder put the ball across the line.

It could have been the winner. But Wolfsburg did not give up, and in the 90′ minute, the Wolves finally broke Frankfurt’s tired backline. Arnold broke forward on the right, meanwhile, Anthony Brook had joined the rush and was left wide open in the centre where he tapped home his teammates cross.

Kevin Trapp was excellent for Eintracht Frankfurt. The keeper, who is on loan from Paris Saint-Germain kept his side in the game when Wolfsburg were pressing. In fact, overall Trapp is perhaps one of the most important pickups for the Eagles this season. Although his distribution is somewhat behind Manuel Neuer and Marc-André ter Stegen he is without a doubt now the third best German keeper. 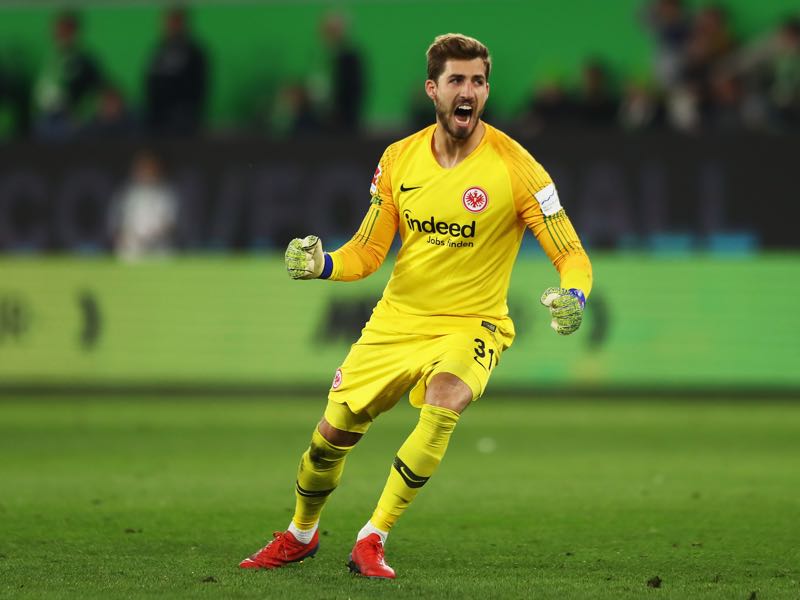 How much would Frankfurt’s Europa League heroics influence the match? Throughout the first 45 minutes, there were little signs of a hangover, but in the second 45, the Eagles showed signs that they were physically struggling. Nine of the starting XI started against Benfica, but despite the obvious problems on the pitch Frankfurt managed to collect an important point in the race for the Champions League spots