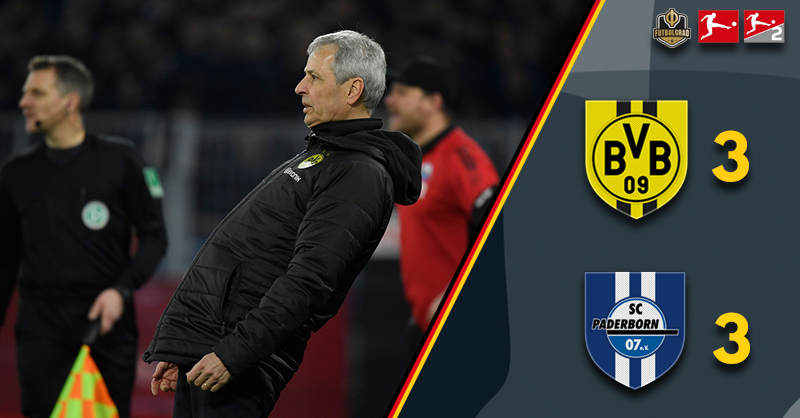 How would Borussia Dortmund respond to the Klassiker defeat? The answer was not well, as underdogs Paderborn took them apart in the first 45 minutes. The Sport-Club took the lead when Kai Pröger won the ball in his half overrun Nico Schulz to setup Streli Mamba for the lead in the 5th minute. Dortmund seemed nervous throughout the match, and even when pressing up high failed to produce chances. Instead, Paderborn added a second. Once again, it was Mamba, the striker breaking the offside trap to beat Roman Bürki one-v-one. But Paderborn were not done there. In the 43rd minute, Gerrit Holtmann overran Julian Weigl and then beat Bürki with a low shot.

Dortmund came out flying in the second half and were on the board when Jadon Sancho scored from inside the box in the 47th minute. The Black and Yellows were now in the game. But also lucky that Mamba did not score his third in the 64th minute. The chance came right in the middle of the Black and Yellows putting on the pressure; it highlighted that Paderborn remained dangerous even though Dortmund were pressing for an equalizer. Julian Brandt and Thorgan Hazard (76′), as well as Sancho (83′), had chances to half the scoreline. Finally, in the 84th minute, Axel Witsel halved the lead with a header from inside the six-yard box. Then in the 92nd minute, completed the comeback to make it 3-3 with a header. 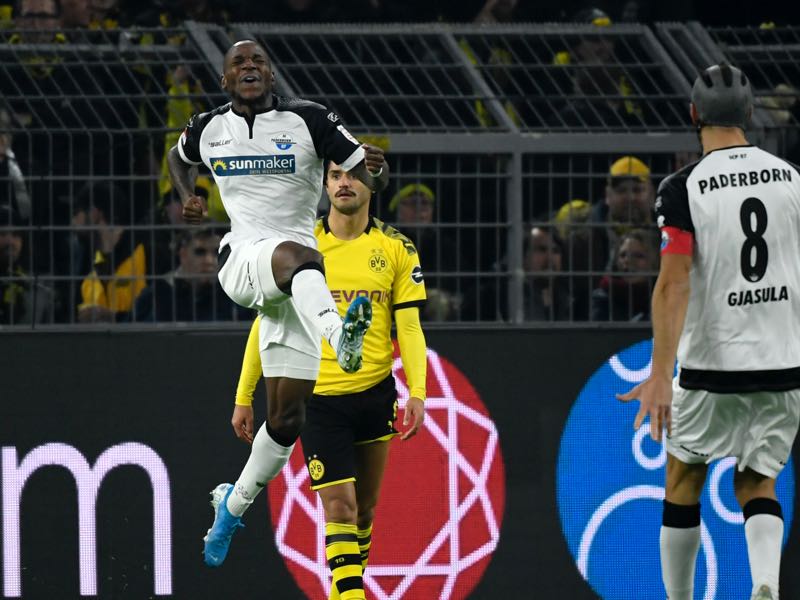 Streli Mamba was sensational tonight. Paderborn signed the striker on a free transfer this summer from relegated Liga 3 side Energie Cottbus. On Friday night, the 25-year-old German-Congolese striker scored his third and fourth Bundesliga goal in just his fourth game. With a top speed of 34.4km/h, he was simply to fast for a sluggish BVB defense.

The Nigerian national team player had an excellent game. The wing-back had to first deal with Nicolas Schulz and then Achraf Hakimi on top of the ever-rotating BVB attacking-three.

Jadon Sancho was heavily criticized after the Bayern result. Played off the park by Alphonso Davies two weeks ago, Sancho managed to score tonight. Although one of the best in Black and Yellow, he struggled at times against Paderborn wing-back Jamilu Collins. Nonetheless, the teenager might be one of the few Dortmund players tonight, to take something positive from the game, as his form seems to rebound slowly.

The Dortmund fans wanted a reaction from the Black and Yellows after a disappointing performance against Bayern. The first half, however, was a disaster as Paderborn sliced Dortmund apart at will. “We didn’t know how to press,” Marco Reus said after the game to DAZN. “That is something we need to think about.”

The halftime result was met with whistles from the Yellowwall. Whistles and boos that echoed through the stadium at fulltime as well. Dortmund may have salvaged a point but were not able to repair the damage done in the first 45 minutes. The pressure will certainly grow on head coach Lucien Favre in the coming days. With the annual general meeting just around the corner, expect an exciting few days in Dortmund.