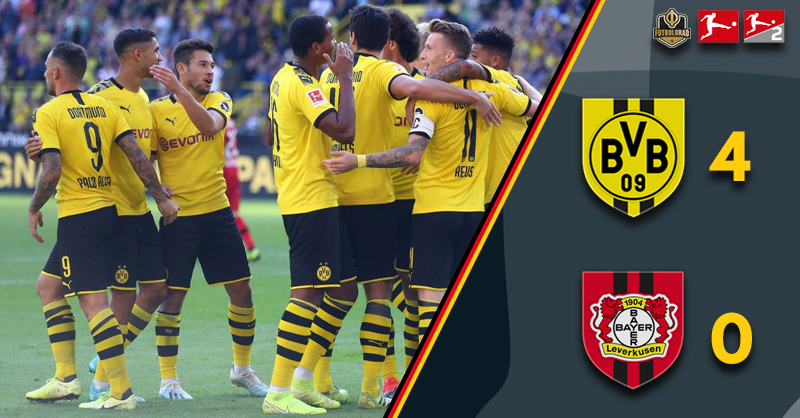 Dortmund simply sublime as Leverkusen feel the after effects of Berlin

Lucien Favre demanded a response from defeat in Berlin. On a sun-soaked afternoon in Dortmund, he got one, die Schwarzgelben just too hot to handle for Leverkusen as they fired in four excellent goals without response.

It’s a game that guarantees goals – in their last eight meetings these two teams have hit the net 31 times, from the first whistle Saturday there was little to suggest today would be any different.

Leverkusen enjoyed almost 70% possession when the sides met last season in the corresponding fixture – Peter Bosz’s Bayer made the short trip home with nothing to show for it, beaten 3-2. So when the game had a similar feeling after 20 minutes there were very few in black and red who had a smile upon their face.

Karim Bellarabi was finding acres of space on the far-side, Dortmund continued their recent run of form by looking particularly vulnerable to a fast winger.  The 29-year-old should have done much better with the two chances afforded to him – the second on 21 minutes should have tested Roman Bürki at least, but his shot was easily blocked.

Dortmund suddenly fired themselves into life – Lukáš Hrádecký made a phenomenal double save, first denying Marco Reus, before a truly world-class reactionary save prevented Julian Brandt from scoring against his old club – die Schwarzgelben were knocking hard on the Werkself door, how long could the Finish goalkeeper keep them at bay?

Just four minutes was the answer – Paco Alcácer finishing off a textbook Dortmund move after excellent work by Achraf Hakimi. Like last season, Leverkusen now found themselves behind in a game they were controlling.

The fixture ebbed and flowed at a tremendous pace – as the half time whistle blew, those packed inside Signal Iduna Park had witnessed a breathtaking half of football.

Peter Bosz brought on Leon Bailey at half-time, the Jamaican replacing Nadiem Amiri – and the 22-year-old should have found the net inside of sixty seconds, fluffing his lines from all of three yards.

Moments later that miss became a punishment – Marco Reus sliding the ball home after another assist from Jadon Sancho. The Englishman registering his 11th assist of 2109, a Bundesliga high, but the goal was all about Alcácer’s superb dummy.

The Spaniard stepped over the ball, confusing the entire Leverkusen backline, Reus had his moment placed upon a plate for him by his clever teammate, an honourable mention though for Manuel Akanji his ‘hockey assist’ to Sancho as good as Alcácer’s stepover.

A second goal deflated Leverkusen, and as full-time approached they looked more interested in hanging on to a two-nill loss than conceding more through forwarding invention.

Raphaël Guerreiro compounded Bosz’s and Leverkusen’s misery on an afternoon they will want to forget by adding a third, and just as the whistle was in Daniel Siebert’s mouth Marco Reus made it four. 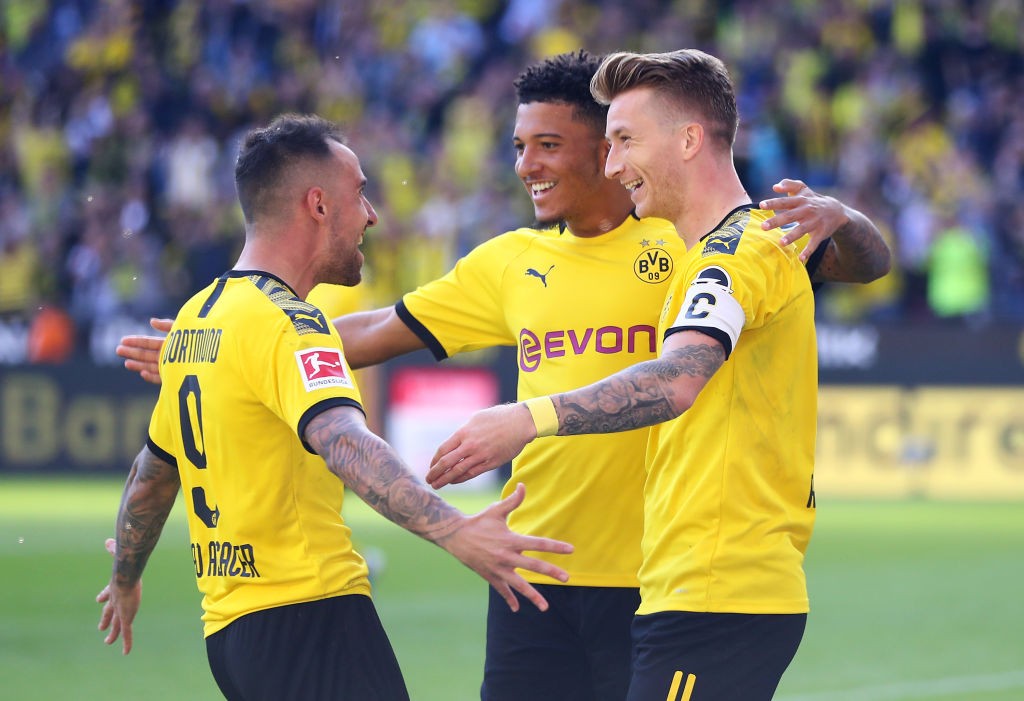 Marco Reus of Borussia Dortmund (R) celebrates after scoring his team’s second goal with Jadon Sancho and Paco Alcacer during the Bundesliga match between Borussia Dortmund and Bayer 04 Leverkusen at Signal Iduna Park on September 14, 2019 in Dortmund, Germany. (Photo by Lars Baron/Bongarts/Getty Images)

There will come a point whereby a lack of superlatives are available to describe the 20-year-old, but for now, he remains a colossus for Lucien Favre’s side. His assist for Dortmund’s second the winger’s 11th of the calendar year.  The palpable buzz from the 81,000 inside Signal Iduna Park when he gets on the ball is astonishing – he is simply loved in these parts.

There should really be a Leverkusen player of note here – after all, impartiality is what reporting is about. However, the Belgian dominated the central area of the park – limiting Bayer to very little, especially in the second half. After a run of abject form, he looks to be returning to his best.

A wonderful finish and even better stepover to allow Marco Reus to score were the key highlights from the Spaniard on an afternoon when his movement caused no end of problems for the Leverkusen defence.

Dortmund needed a response after their Union Berlin embarrassment – today the Südtribüne got one. The wheels have been reattached to Favre’s title pursuit.