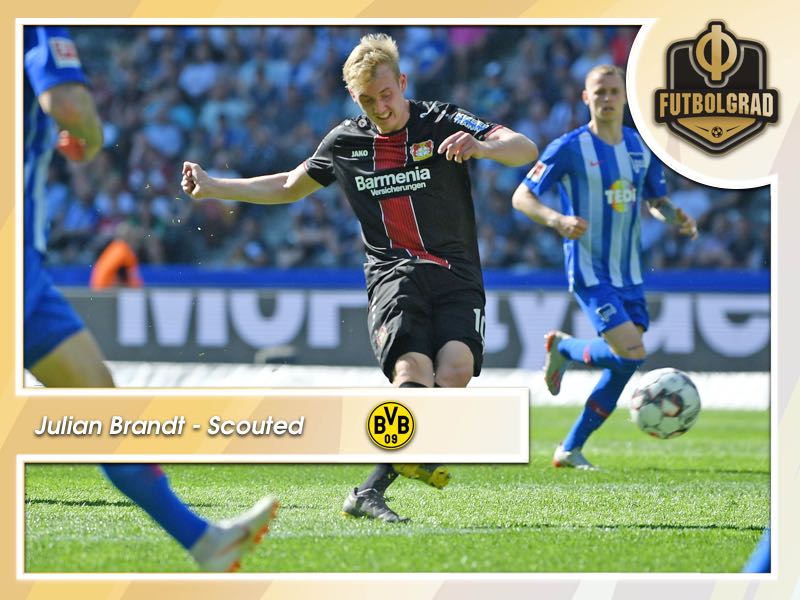 Although the detail of the transfer are yet to be decided, Julian Brandt is now set to join Borussia Dortmund in a transfer worth €25 million. The transfer completes a busy week of activities in which Dortmund, on top of Julian Brandt, also signed Thorgan Hazard and Nico Schulz for a combined transfer fee of less than €80 million.

It is perhaps the most remarkable part of this week’s wheeling and dealing that the Black and Yellows managed to essentially re-invest the €63 million earned from Christian Pulisic plus an additional €17 million in three-star players. Furthermore, given the club’s last few transfer windows there should be enough left in the tank to sign an additional midfielder and a striker.

Meanwhile, in Julian Brandt Borussia Dortmund have signed a key puzzle piece in their quest to unlodge Bayern München from the top of the Bundesliga table.

“Although Julian Brandt has already been playing in the Bundesliga for some time and has lots of experience at both national and international level, at 23 years of age he’s still a young player with lots of potential for development,” Borussia Dortmund sporting director Michael Zorc said in a statement released on the club’s homepage.

Over in Leverkusen, there was some disappointment that Julian Brandt had decided to leave the club. “Our concept has always been to develop young players and sell them with a profit,” Bayer Leverkusen sporting director Rudi Völler said. “We would have liked to keep him a bit longer, but in Kerem Demirbay we have already signed a suitable replacement.”

Leverkusen hoped that by reaching the UEFA Champions League, the club could convince Julian Brandt to stay at Bayer. But the midfielder was ready for the next step in his development.

“I’m a person for whom gut instinct and having a good feeling is important when it comes to decisions,” said Julian Brandt.

“When it comes to Borussia Dortmund, I have a very good feeling. I want to continue my personal development, that’s one of the main reasons for my transfer,” Brandt added.

One of the main reasons for Brandt to jump ship? His desire to win a title and although Borussia Dortmund fell short in dramatic fashion this season there is now a sense that the Black and Yellows have significantly closed the gap to Bayern München.

“BVB came extremely close to winning the title last season. So there’s room for improvement. I have high hopes with the lads, I’m very motivated and optimistic – not just when it comes to my development as an individual, but the development of the entire team too,” Brandt said.

Julian Brandt, in fact, could be a significant piece in Borussia Dortmund challenging Bayern next season. Like it is the case with Borussia Dortmund’s two other two summer signing versatility was one of the main reasons for Dortmund wanting to sign Julian Brandt. “He can be deployed in several attacking positions and will enhance our game with his creativity,” Zorc said.

Julian Brandt by the numbers

That versatility, however, was developed this season under Bayer Leverkusen head coach Peter Bosz. Bosz moved Julian Brandt from the wing into a more central role in his 4-3-3 setup. The result was dynamic number eight, in some ways a mix between Liverpool’s Naby Keïta and Bayern’s former midfielder Bastian Schweinsteiger.

In fact, it is fascinating that Brandt’s recent step forward came under Dutch head coach Bosz. It was, after all, Louis van Gaal at Bayern, who re-invented Schweinsteiger, turning him from a slightly to slow wing player to a dominant number eight on the double-pivot position. Now Bosz, also a former Ajax head coach, has done something similar with Julian Brandt essentially re-inventing the attacking midfielder.

For Borussia Dortmund, this means that they are now getting one player, who can play in three positions. Brandt can play on the wing, as a false-number 9 but also in a dynamic midfield role in a 4-3-3 but also a 3-5-2 formation.

Buying Julian Brandt, in fact, could finally unleash Favre’s full tactical potential. The head coach had experimented with a 4-3-3 formation at the beginning of the season but quickly reverted to a 4-2-3-1 with Axel Witsel and Thomas Delaney in the double pivot. It was not the most creative solution, but it provided stability, especially as Julian Weigl and Mahmoud Dahoud struggled to make the step up to Borussia Dortmund.

With Julian Brandt, Borussia Dortmund add a player that can operate in the midfield three but still play a key pass in the final third. Going by this season’s numbers Brandt, in fact, would be second among all Dortmund forwards in completed passes in the final third behind Jadon Sancho (79.85%) with 78.22% ahead of Hazard (77.48%), Christian Pulisic (75.93%) and Marco Reus (72.73%).

Those advanced stats are underlined by hard numbers. With 13 assists this season ranks Julian Brandt second among Dortmund players just behind English sensation Jadon Sancho and ahead of his new teammate Hazard. In other words, Borussia Dortmund add another dangerous piece to a side that already had plenty of attacking power.